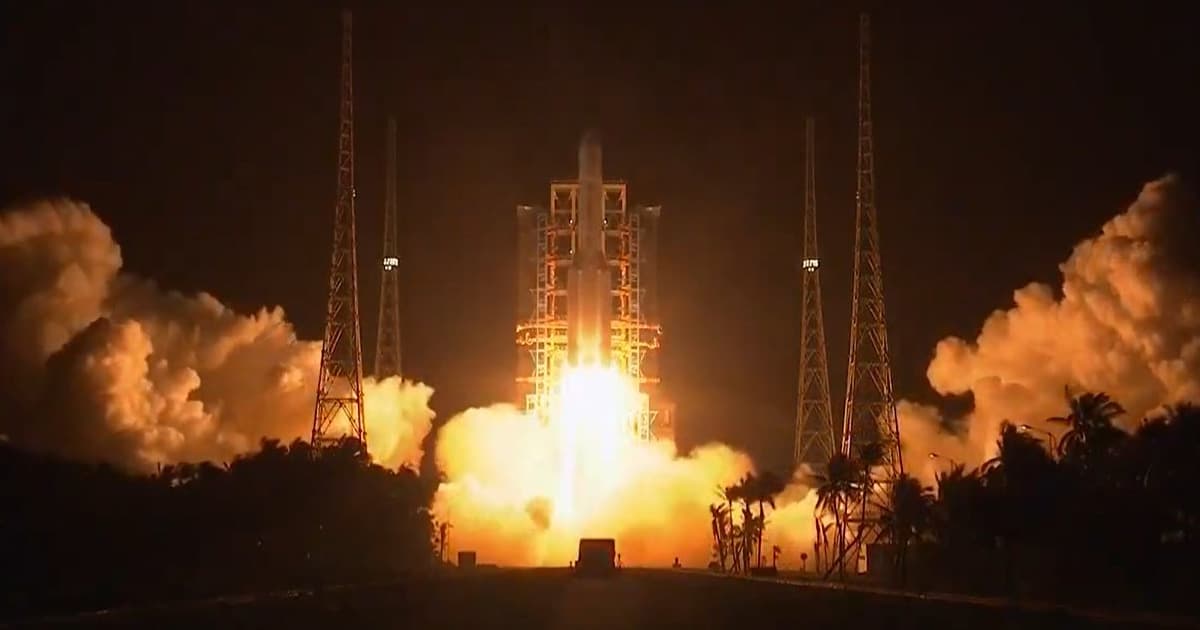 It's the first mission of its kind since the mid 1970s.

It's the first mission of its kind since the mid 1970s.

China has successfully launched its Chang'e-5 sample return mission to the Moon.

The Long March-5 rocket took off from the Wenchang Space Launch Site in China’s Hainan Province at 3:31 p.m. Eastern time.

It's a historic moment: the last successful lunar return mission occurred in 1976 when the Soviet Union's Luna 24 returned 170 grams of lunar soil to the Earth.

The Chang'e-5 lander is headed to the western edge of the near side of the Moon, where the surrounding natural formations are far younger than the ones sampled by Apollo astronauts in the 1960s and 70s.

The launch also follows the success of predecessor Chang'e-4, which became the first spacecraft to safely touch down on the far side of the Moon in January 2019.

The Chang'e-5 lander will spend less than two Earth weeks on the Moon, which represents the daytime portion of just one day on the Moon.

It will attempt to scoop up two kilograms (4.4 pounds) of rock samples before returning them back to Earth in mid-December.

The Moonian
Senior NASA Official Fears Getting "Stuck" on the Moon
5. 4. 22
Read More
Moon Patrol
US Military Announces Plans for Satellite Orbiting the Moon
3. 4. 22
Read More
Artificial Baby
Chinese Scientists Create System to Care For Embryos in Artificial Womb
2. 1. 22
Read More
+Social+Newsletter
TopicsAbout UsContact Us
Copyright ©, Camden Media Inc All Rights Reserved. See our User Agreement, Privacy Policy and Data Use Policy. The material on this site may not be reproduced, distributed, transmitted, cached or otherwise used, except with prior written permission of Futurism. Articles may contain affiliate links which enable us to share in the revenue of any purchases made.
Fonts by Typekit and Monotype.