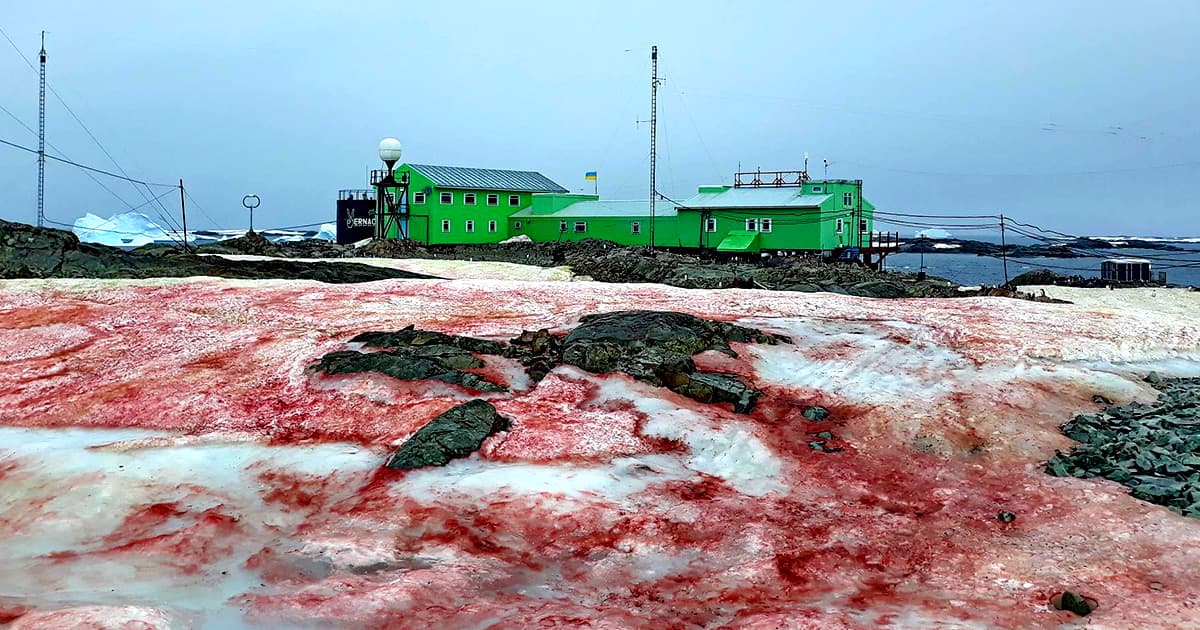 Red is the New Black

Bright-Red "Blood Snow" Is Falling From the Sky in Antarctica

These strange algae blooms could end up contributing to climate change.

2. 27. 20
Ukraine Ministry of Education and Science

These strange algae blooms could end up contributing to climate change.

A Facebook post by Ukraine's Ministry of Education and Science shows a research station on an island just off the coast of Antarctica's northernmost peninsula covered in "blood snow."

The gory-looking scene is not the result of a seal hunt gone wrong — it's an astonishingly red-pigmented, microscopic algae called Chlamydomonas nivalis, which thrives in freezing water as the ice melts during Antarctica's record-breaking warm summer.

When summer hits the polar regions, the algae bloom, staining the snow and ice around it in blood-resembling red, as Live Science explains. The phenomenon was first noticed by Aristotle thousands of years ago and is often referred to as "watermelon snow" thanks to its subtly sweet scent and color.

What makes the blooming algae red is the same stuff that give carrots and watermelons their reddish tint — carotenoids.

It's a stunning display of a natural phenomenon — but it also creates a nasty feedback loop that causes the ice to melt faster. The red color causes less sunlight to be reflected off the snow, causing it to melt faster, as the Ukrainian team explains in its post. The accelerated melting then causes more algae to grow, completing the cycle.

It's not the only surreal display in the world caused by such a feedback loop, as Live Science points out. Blooming algae caused sea foam to swallow up the coast of a Spanish town in January. Similar algae blooms even caused shores around islands in the East China Sea to glow blue.

More on algae: A New Bioreactor Captures as Much Carbon as an Acre of Trees