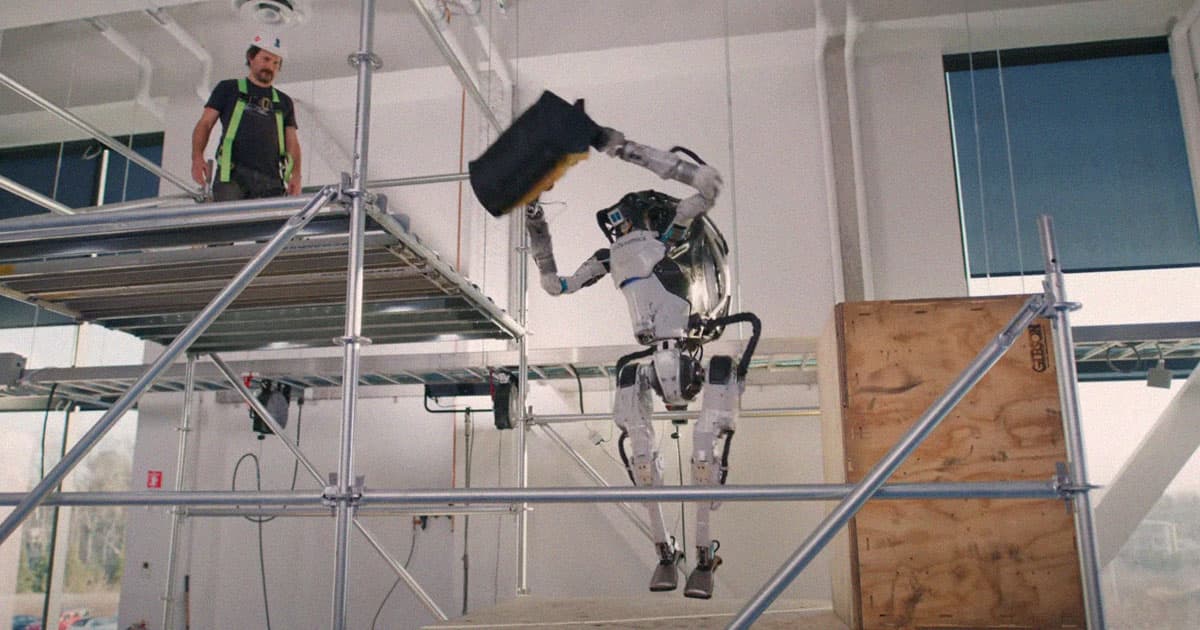 The flip at the end is seriously impressive.

The flip at the end is seriously impressive.

Pass Me Those Tools

The parkour expert showed off its problem solving skills in a video titled "Atlas Gets a Grip," released by the robot maker today. In it, the bot navigates a mocked up construction site with ease — and even tosses a bag of tools to a construction worker standing on top of some scaffolding.

Atlas didn't stop there. After completing its task, the robot effortlessly pulled off a backflip with a twist.

Sure, the video was almost certainly extensively rehearsed and carefully programmed ahead of time, but it's nonetheless another impressive demonstration of the company's industrious and athletic biped.

This latest stunt is meant to demonstrate how Atlas can actually be helpful, and not just dance the night away.

"We’re not just thinking about how to make the robot move dynamically through its environment, like we did in Parkour and Dance," Boston Dynamics’ team lead on Atlas, Scott Kuindersma said in a behind the scenes video, referring to previous videos featuring Atlas the company had released over the years.

"Now, we’re starting to put Atlas to work and think about how the robot should be able to perceive and manipulate objects in its environment," he added.

The company has already started selling two of its robots, dubbed Stretch and Spot, to customers. The first is a wheeled, one-armed warehouse robot, while the latter is quadrupedal robodog that has already been dispatched to surveil construction sites, assist firefighters, and even poke around a SpaceX launch site.

Kuindersma argued in the video that upright-standing robots could do well in manufacturing, factory, and construction settings — "spaces that were traditionally designed for humans to do work in."

But, as Atlas controls lead Ben Stephens acknowledged in a press release, they're still a "long way off" from humanoid robots that can take over manual labor and potentially dangerous tasks.

"Manipulation is a broad category, and we still have a lot of work to do," he added. "But this gives a sneak peek at where the field is going."

More on Atlas: Watching Elon Musk's Robot Back to Back With Boston Dynamics Is... Something