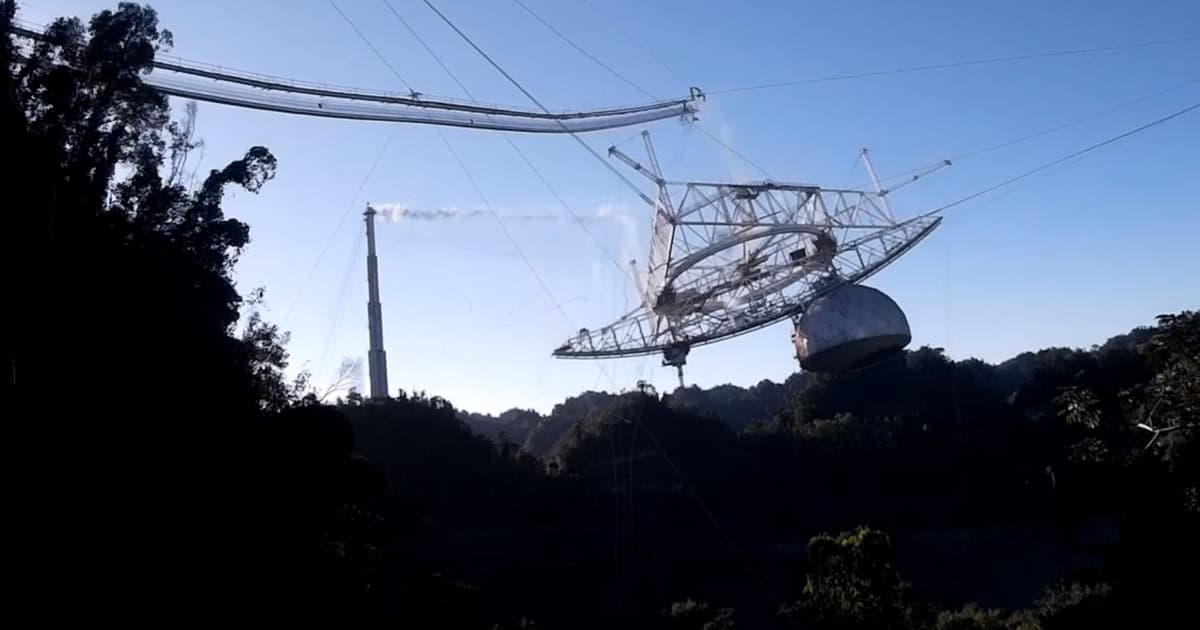 Ugh, that sound is horrifying.

Ugh, that sound is horrifying.

December 1 was a sad day for astronomers everywhere. The iconic 57-year-old Arecibo Observatory in Puerto Rico met its final demise when the 900-ton platform suspended above the 1,000-foot-wide dish antenna came crashing down — an accident caused by failing cables that were already stretched to their limits by previous damage.

Now, newly released footage shows the dramatic failure, including close-up drone shots of cables slowly unraveling, leading to the platform hurtling down in a cloud of debris.

Stunning video of the moment the Arecibo Observatory telescope platform collapsed and smashed into the dish:

Two cable failures, one in October and one in November, sealed the fate of the observatory, with engineers initially planning to decommission and deconstruct the aging structure.

The collapse, however, was not planned, despite efforts to introduce some slack into existing cables to keep one of the strained cable support towers upright.

"After the November 6th cable failure, the [remaining] cables could have failed at any time," Ralph Gaume, director of the National Science Foundation's Division of Astronomical Sciences told reporters at a briefing this morning, as quoted by Engadget. "We were unable to predict when it would happen, [but] we knew it would happen."

There is still a fleeting chance of rebuilding the structure, and the NSF has yet to rule out such a possibility. But it will be a hard sell, especially as it involves asking Congress for funding.

Spider Stars
Astronomers Discover "Spider Stars" That Tear Apart Other Stars
1. 19. 21
Read More
Loeb Strikes Again
Harvard Astronomer Says We Should Hunt for Alien Probes
12. 22. 20
Read More
Phone Home
SETI Institute Admits That Proxima Centauri Signal Is Very Strange
12. 22. 20
Read More
+Social+Newsletter
TopicsAbout UsContact Us
Copyright ©, Camden Media Inc All Rights Reserved. See our User Agreement, Privacy Policy and Data Use Policy. The material on this site may not be reproduced, distributed, transmitted, cached or otherwise used, except with prior written permission of Futurism. Articles may contain affiliate links which enable us to share in the revenue of any purchases made.
Fonts by Typekit and Monotype.