This Awful Tabloid Predicts a Killer Asteroid Almost Every Day

Is this the worst science journalism on the internet? 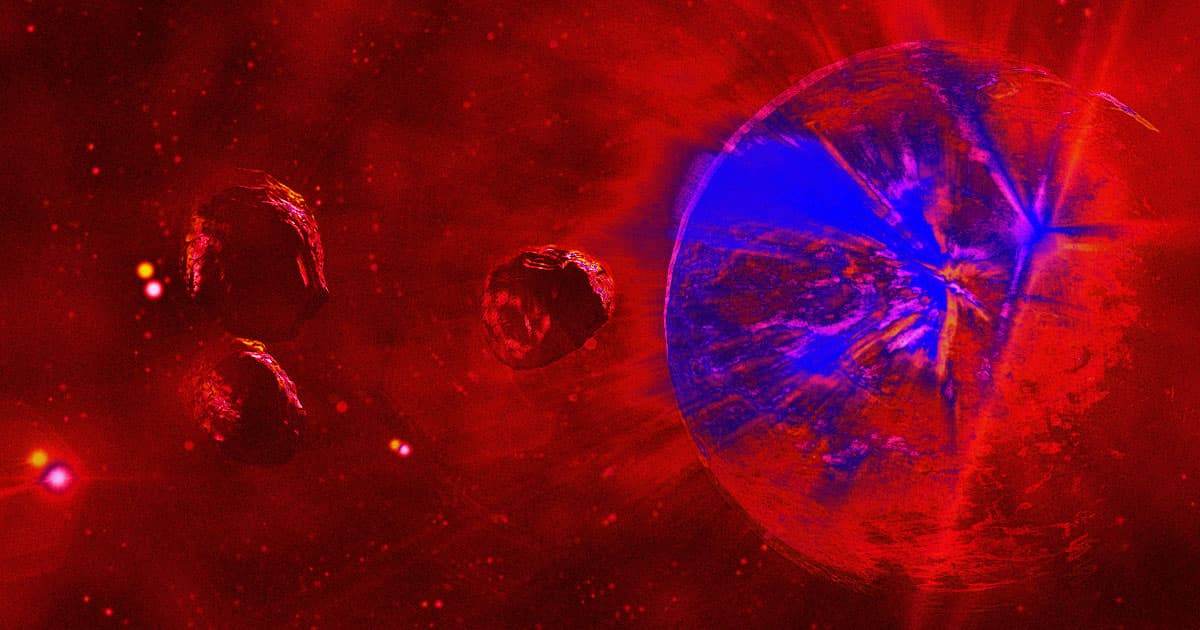 On October 4, 2019, writers at the British tabloid The Daily Express published five separate articles about what they claimed were killer asteroids careening toward the Earth.

At the Express, this seems fairly typical. It's rare for a day to go by without the newspaper warning, or heavily implying, that a deadly space rock is about to annihilate civilization. Between September 7 and October 8, for instance, we counted 87 Express articles about killer asteroids — which works out to an average of nearly three doomsday space posts per day.

If these sensational headlines — our favorite might be "Asteroid warning: Deep impact predicted for 2069 claims Nostradamus prophecy expert" — are to be believed, Earth would be under a constant barrage of catastrophic asteroid hellfire. Which is strange, of course, because as far as we can tell, we're still alive.

The explanation likely has more to do with the business model of online publishing than astrophysics: the paper has probably figured out that running thinly-sourced, out-of-context headlines about an imminent asteroid Armageddon gets clicks. Just look at their search engine-friendly URLs, which often include strings of terrifying keywords like "end-of-world" and "apocalypse" — or at Google News, where it's rare for a day to go by without one of the Express's killer asteroid stories being featured prominently in the science section.

The result, unfortunately, is terrible science journalism. The standard practice at the tabloid seems to be to take a real news story and sensationalize it as much as possible without flat-out lying.

Take an article about what the tabloid called an "asteroid swarm" of 16 space rocks "hurtling towards Earth." Scroll down several paragraphs — and past a few images of gigantic fireballs crashing into our planet — and you'll read that all 16 asteroids will safely sail by.

Many of the Express's killer asteroid articles cover the exact same news — like these two, which were published within hours of each other — which makes it seem like dangerous space rocks are discovered several times per day. The tabloid also tends to publish dubious articles claiming that experts know exactly where asteroids will hit the Earth, and that an inevitable impact will kill billions.

Remember that "Nostradamus 2069" article from earlier? The very first sentence reads as follows: "The asteroid will hit Earth in our lifetimes, triggering widespread tsunamis and a firestorm of destruction on a global scale." Readers have to scroll past similar nonsense and even more fireball pictures to learn that the Express is citing 16th-century poetry as evidence.

And it's not until the last two paragraphs of the article that the Express dutifully reports that neither NASA nor the European Space Agency has detected a single asteroid or comet that poses even the slightest threat to Earth.

In an October 1 article about four asteroids — all within the swarm of 16 mentioned in that Express article — passing nearby, Space.com immediately clarifies in the headline that there's no danger. The rest of the article properly contextualizes the distances from Earth at which each asteroid would travel, and also clarifies that when NASA classifies an asteroid as "potentially hazardous," it doesn't even mean that an impact is imminent or even likely.

The bottom line is claiming that a world-ending impact is impending crosses all sorts of ethical boundaries. Readers with poor astronomy or media literacy — likely a large proportion of digital readership — face a bombardment of fear-mongering, inaccurate news being shotgun blasted at them like asteroids plunking into the Atlantic Ocean.

The tabloid also uses sneaky rhetorical tricks. Many Express stories about allegedly deadly space rocks specify the speed at which an asteroid is traveling to make it seem particularly dangerous. Others mention that an asteroid is heading toward Earth just to pose the same clickbait question: "Will it hit?"

Is it possible that an asteroid someday smacks into Earth? Sure, and scientists are working on contingency plans like launching nuclear strikes — admittedly far-fetched — or finding ways to safely redirect their paths away from Earth.

These are things that the public ought to know about and that science writers ought to communicate, but only in a way that focuses on the facts of the matter: that collisions are extremely unlikely, and that there's a big difference between an asteroid traveling "near Earth" and anything that actually poses a risk down on the ground.

The Express, though, seems to have thrown out context in order to treat killer asteroids as bread and butter. Over the entire stretch of time that we examined, there were only four days that the Express didn't publish an article about a killer asteroid.

As of press time, the Express hasn't responded to Futurism's questions about its editorial standards as they pertain to killer asteroids.

More on science journalism: Local newspapers are essential for saving us through science (which, of course, means they're dying right now)

Read This Next
Space Lumps
Scientists Say We May Be Extremely Wrong About the Universe
Into Darkness
Inside NASA's Bold Proposal to Probe the Mysteries of Dark Matter
Myanus, Hisanus, Heranus...
Here's What Uranus Scientists Think About Your Disgusting Jokes
Soggy Past
NASA Spacecraft Finds Evidence of Ancient Rivers on Asteroid
Asteroid Wars
Astronomers Spot Bits of Entirely Different Asteroid on Surface of Bennu
More on Hard Science
Tractor Beam
Thursday on the byte
Scientists Build Working Tractor Beam, Although It's Comically Tiny
Having a Blast
Jan 18 on the byte
New Study Shows Where You Should Hide to Survive a Nuclear Attack
Offworld Amino
Jan 15 on the byte
Scientists Find Building Blocks of Life in Meteor That Smashed Into Family's Driveway
READ MORE STORIES ABOUT / Hard Science
Keep up.
Subscribe to our daily newsletter to keep in touch with the subjects shaping our future.
+Social+Newsletter
TopicsAbout UsContact Us
Copyright ©, Camden Media Inc All Rights Reserved. See our User Agreement, Privacy Policy and Data Use Policy. The material on this site may not be reproduced, distributed, transmitted, cached or otherwise used, except with prior written permission of Futurism. Articles may contain affiliate links which enable us to share in the revenue of any purchases made.
Fonts by Typekit and Monotype.