Soggy Past
10. 8. 20 by Victor Tangermann
Soggy Past
/Hard Science

The team is calling it a "major scientific triumph" for NASA's OSIRIS-REx mission. 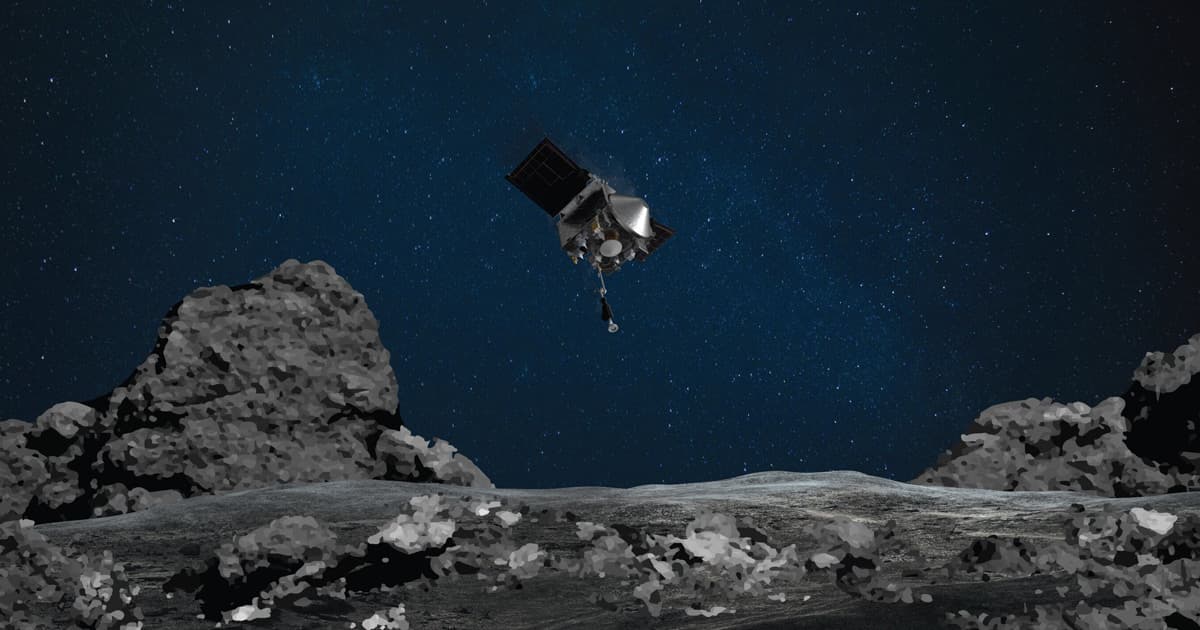 On October 20, NASA's OSIRIS-REx spacecraft will attempt to collect some bits of material from the surface of Bennu, a small near-Earth asteroid about 500 meters across.

Before it plunges down towards the space rock's surface, scientists are locking in their best guess as to what they will find. According to the latest research, as detailed in a number of new research papers published today, scientists are expecting to find carbonates, material that is often deposited by water on Earth.

By looking at readings courtesy of OSIRIS-REx's visible and infrared spectrometer, they discovered "veins of carbonate" on Bennu's surface. Tantalizingly, that could mean that Bennu's parent, likely a much larger planetoid or proto-planet, featured an "asteroid-scale hydrothermal system of water," according to a statement — in other words, ancient rivers.

"If the veins on Bennu are carbonates, fluid flow and hydrothermal deposition on Bennu’s parent body would have occurred on kilometer scales for thousands to millions of years," the team led by Hannah Kaplan from NASA's Goddard Space Flight Center, concluded in their paper.

They suggest that water could have seeped through cracks on the surface of Bennu's parent body, leaving traces of carbonate behind. Some of these veins could have once accounted for water flows covering areas of up to two dozen miles across.

The finding has some sweeping implications.

"One of the driving points of this mission is that these asteroids could have delivered some of the precursor organic matter that gave rise to [life on] Earth," Kaplan told Popular Science.

Scientists also found that the regolith near Nightingale crater, the site where OSIRIS-REx will touch down, was only recently exposed to space, giving us the best shot at gleaning insights into Bennu's history.

"The abundance of carbon-bearing material is a major scientific triumph for the mission," Dante Lauretta, OSIRIS-REx principal investigator at the University of Arizona in Tucson, said in a NASA statement. "We are now optimistic that we will collect and return a sample with organic material – a central goal of the OSIRIS-REx mission."

The spacecraft's spectrometry readings painted a surprising picture of Bennu, showing that the rocks making up its surface are far more diverse than we originally thought. This diversity indicates the presence of a variety of different materials that originally made it onto Bennu from its parent body.

Some of those materials are more porous than others. In fact, scientists suggest that they aren't nearly as strong as we initially thought, likely incapable of surviving the trip through Earth's atmosphere. In other words, samples returned by OSIRIS-REx will give us a unique opportunity to study meteorites that we've never seen before on Earth.

Detailed gravity readings gleaned from the space rock's orbit, separate research led by Daniel Scheeres of University of Colorado Boulder, also showed that Bennu is likely dotted with pockets of materials that vary significantly in density. In fact, the team suggest that the core of Bennu could actually be entirely empty, enough space for several football fields.

Read This Next
Into Darkness
Inside NASA's Bold Proposal to Probe the Mysteries of Dark Matter
Martian Ammonia
NASA Rover Detects Organic Molecules on the Surface of Mars
Myanus, Hisanus, Heranus...
Here's What Uranus Scientists Think About Your Disgusting Jokes
Joseph Strikes Again
Experts Shred Paper Claiming to Identify Mushrooms on Mars
Mars Shrooms
Extremely Dubious Research Claims to Spot Fungus Growing on Mars
More on Hard Science
Moved to Tears
Yesterday on the byte
Scientists Say New James Webb Images Are So Powerful That It Was Emotional Just Looking at Them
Good God
Tuesday on the byte
Huge Cloud of Toxic Yellow Gas Kills 13
zombie star
Tuesday on futurism
Scientists Puzzled by Star That Exploded in Supernova But Somehow Survived
READ MORE STORIES ABOUT / Hard Science
Keep up.
Subscribe to our daily newsletter to keep in touch with the subjects shaping our future.
+Social+Newsletter
TopicsAbout UsContact Us
Copyright ©, Camden Media Inc All Rights Reserved. See our User Agreement, Privacy Policy and Data Use Policy. The material on this site may not be reproduced, distributed, transmitted, cached or otherwise used, except with prior written permission of Futurism. Fonts by Typekit and Monotype.