Stunning Images Appear to Show a Planet Being Born

For the first time in history, astronomers say they've spotted a planet forming. The images are beautiful. 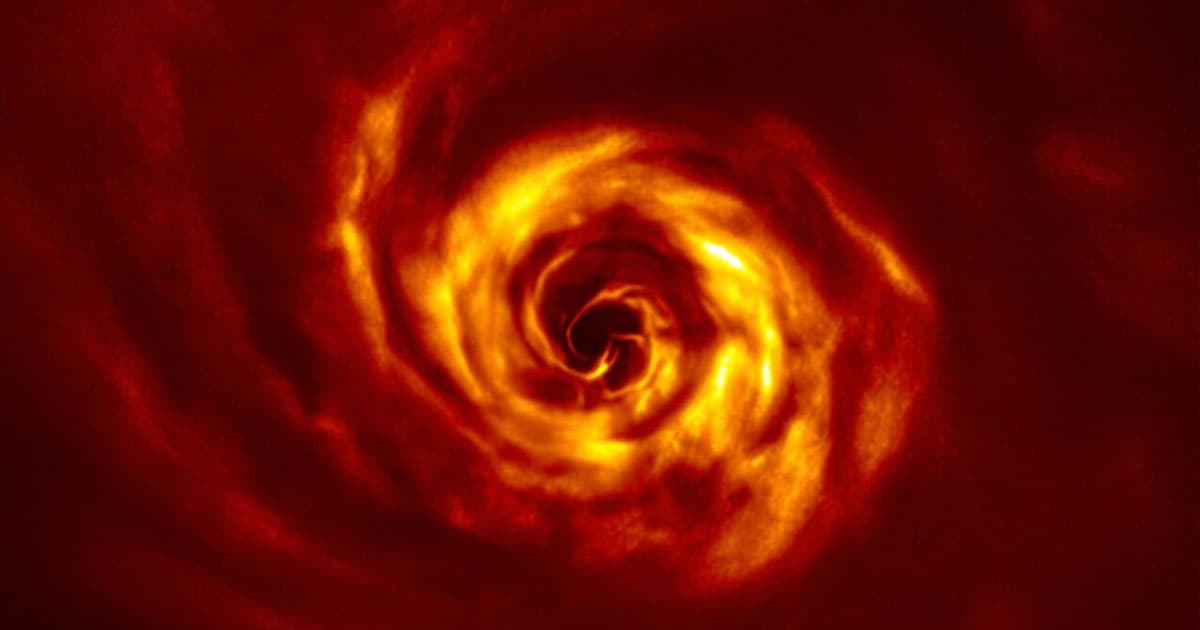 Scientists may have caught the first-ever pictures of a planet being born around a young star, using the European Southern Observatory’s Very Large Telescope (ESO’s VLT).

The stunning images show swirls of dust and gas spiraling around the star system AB Aurigae, about 520 light-years, from Earth and the "twist," where astronomers suspect a planet is forming.

According to an ESO statement, the research is likely the first direct evidence of a baby planet being born.

"Thousands of exoplanets have been identified so far, but little is known about how they form," Anthony Boccaletti from the Observatoire de Paris in France and lead author of the study published in Astronomy & Astrophysics today said in the statement. "We need to observe very young systems to really capture the moment when planets form."

Emmanuel Di Folco of the Astrophysics Laboratory of Bordeaux (LAB), France and co-author of the study, likened the circulating ripples to "the wake of a boat on a lake."

The scientists believe the twist at the center of the image marks the spot where the baby planet could be forming.

A couple years ago, scientists managed to take images of spiral arms of gas surrounding a star that scientists believe were early evidence of planet formation — but the "twist" at the center adds something new to the story.

"The twist is expected from some theoretical models of planet formation, "Anne Dutrey, another co-author from the LAB, said in the statement. "It corresponds to the connection of two spirals — one winding inwards of the planet’s orbit, the other expanding outwards — which join at the planet location."

The swirls allow gas and dust to collect — and allow planets to form and grow.

Scientists are hoping that a more powerful telescope will allow astronomers to get an even better look.

"We should be able to see directly and more precisely how the dynamics of the gas contributes to the formation of planets," Boccaletti said.

Read This Next
Absolute Unit
Scientists Discover Gigantic New World that Defies Previous Planetary Understanding
Star Stream
Something Is Ripping Apart the Nearest Star Cluster to Earth
Snap
Scientists Just Took an Actual Picture of a Planet in Another Star System
Dark Matter Mystery
Dark Matter's Effect Is 10x What It Should Be, Scientists Say
Young Sun Planets
This is the First Image of a Multi-Planet System Around a Sun-Like Star
More on Hard Science
Tractor Beam
Thursday on the byte
Scientists Build Working Tractor Beam, Although It's Comically Tiny
Having a Blast
Jan 18 on the byte
New Study Shows Where You Should Hide to Survive a Nuclear Attack
Offworld Amino
Jan 15 on the byte
Scientists Find Building Blocks of Life in Meteor That Smashed Into Family's Driveway
READ MORE STORIES ABOUT / Hard Science
Keep up.
Subscribe to our daily newsletter to keep in touch with the subjects shaping our future.
+Social+Newsletter
TopicsAbout UsContact Us
Copyright ©, Camden Media Inc All Rights Reserved. See our User Agreement, Privacy Policy and Data Use Policy. The material on this site may not be reproduced, distributed, transmitted, cached or otherwise used, except with prior written permission of Futurism. Articles may contain affiliate links which enable us to share in the revenue of any purchases made.
Fonts by Typekit and Monotype.