The big little planet that could. 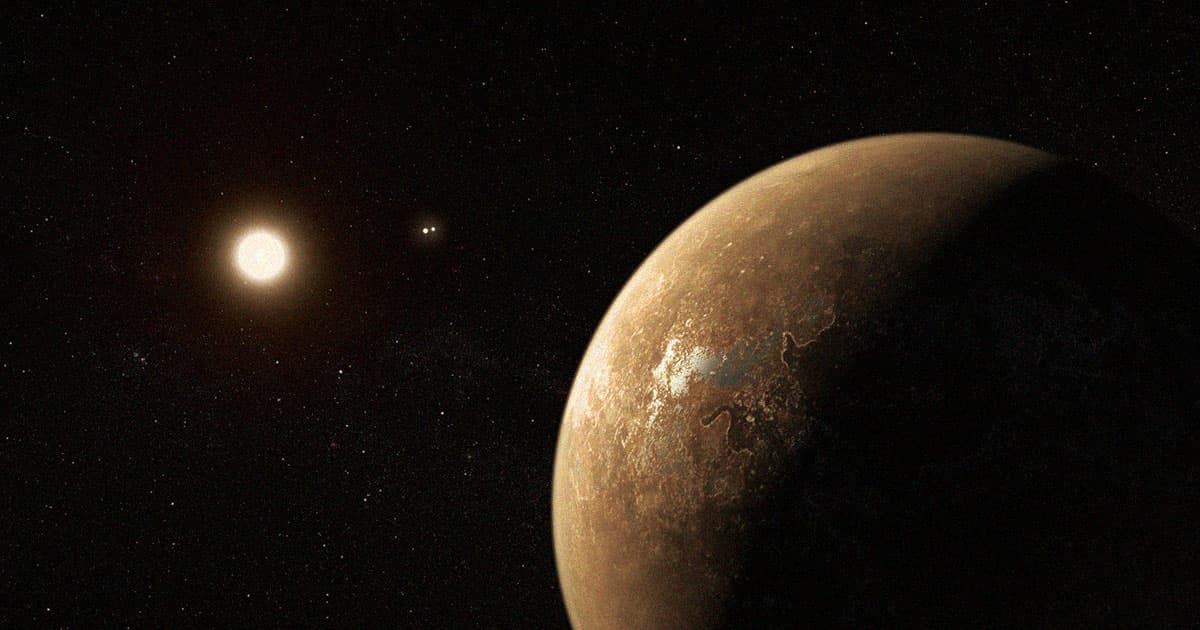 Rejoice! Scientists have discovered a new planet — and it's really honkin' big!

The new exoplanet, named "b Centauri b" for its location orbiting the b Centauri binary star system, is located a cool 325 light years from Earth in the neighboring Centaurus constellation.

First photographed by the aptly-named Very Large Telescope at the European Southern Observatory — confusingly located in Chile — b Centauri b is the belle of the ball for a few fascinating reasons, not least of which that it's orbiting a binary system that's collectively somewhere between six and 10 times heavier than our Sun, which now makes the b Centauri system the heaviest planet host in known existence.

1/ Our Very Large Telescope has captured a direct image of a planet orbiting b Centauri the hottest and most massive planet-hosting star pair found to date!

b Centauri is now also the hottest star pair to have a planet orbiting it — so hot, in fact, that researchers previously thought it wasn't possible for planets to orbit them. The "main" star, b Centauri A, is roughly three times hotter than our Sun at a whopping 32,000 degrees Fahrenheit, and combined with its supporting star, this system is blasting this newly-discovered planet with brutal quantities of X-ray and ultraviolet radiation.

Stars like these, Swedish astronomer Markus Janson said in a statement about the discovery of b Centauri b, "are generally considered as quite destructive and dangerous environments."

"It was believed that it should be exceedingly difficult to form large planets around them," he added.

This big little planet that could is unlikely for another reason, too: it's 14 times further away from b Centauri than Pluto is from our Sun, or 550 times further from its binary star system than Earth. A new Nature paper about the planet by Janson and collaborators notes that this extremely wide orbit — one of the widest in the known universe — may be the reason why the planet has been able to survive all the radiation from the stellar pair it calls home.

3. The planet is about ten times heavier than Jupiter and orbits b Centauri at 100 times the distance Jupiter orbits the Sun. This is one of the widest orbits yet discovered and could be key to the planet’s survival.

Yet another property that sets this new exoplanet apart is the relative youth of the stars it orbits, which are each a mere 15 million years old compared to our Sun's 4.6 billion.

For now, Space.com noted, researchers don't have anything close to a probable conclusion as to how b Centauri b was formed. It could have formed via "core accretion," the theory that posits the formation of planets like Jupiter via dust particles banding together until they become large enough to have gravitational pull.

Alternatively, researchers said, it may have been born through "gravitational instability" in which an extant nebula collapses due to its own massive gravity and turns into the same kind of dust particles necessary for planetary formation in the core accretion theory.

One thing is for sure, though: b Centauri b's unlikely existence is upending lots of things astrophysicists thought they knew.

"Finding a planet around b Centauri was very exciting since it completely changes the picture about massive stars as planet hosts," Janson said.

The discovery of this new, relatively nearby planet is a technological feat that would have been impossible to fathom even 30 years ago, when the first exoplanet was discovered. As megatelescopes become more and more advanced, the universe will likely continue to become stranger and larger than ever.

Read This Next
So Close But So Far
Astronomers May Have Spotted a New Planet Around the Nearest Star
Snap
Scientists Just Took an Actual Picture of a Planet in Another Star System
Young Sun Planets
This is the First Image of a Multi-Planet System Around a Sun-Like Star
How is Planet Born
Stunning Images Appear to Show a Planet Being Born
Futurism
To Understand The Atmospheres Of Distant Exoplanets, Look To Your Car Engine
More on Hard Science
Tractor Beam
Yesterday on the byte
Scientists Build Working Tractor Beam, Although It's Comically Tiny
Having a Blast
Jan 18 on the byte
New Study Shows Where You Should Hide to Survive a Nuclear Attack
Offworld Amino
Jan 15 on the byte
Scientists Find Building Blocks of Life in Meteor That Smashed Into Family's Driveway
READ MORE STORIES ABOUT / Hard Science
Keep up.
Subscribe to our daily newsletter to keep in touch with the subjects shaping our future.
+Social+Newsletter
TopicsAbout UsContact Us
Copyright ©, Camden Media Inc All Rights Reserved. See our User Agreement, Privacy Policy and Data Use Policy. The material on this site may not be reproduced, distributed, transmitted, cached or otherwise used, except with prior written permission of Futurism. Articles may contain affiliate links which enable us to share in the revenue of any purchases made.
Fonts by Typekit and Monotype.