Will This Glove Finally Let You Touch Stuff in VR?

Imagine a glove that could let you touch objects in a virtual world. 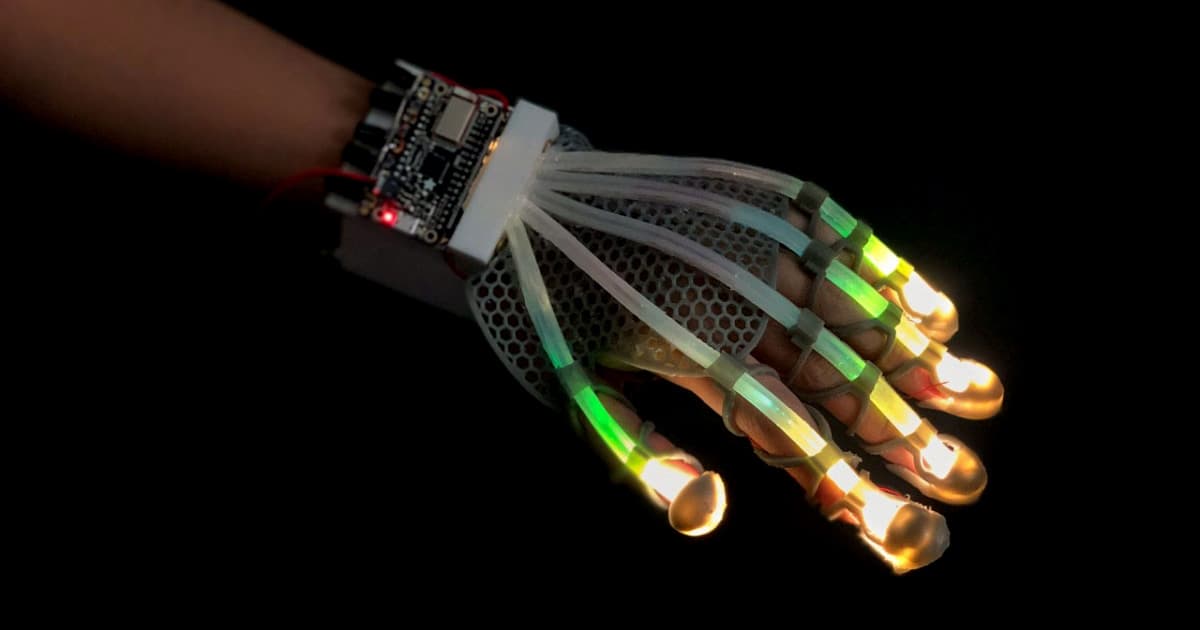 A team of scientists at Cornell University has created a stretchable fiber-optic sensor that detect exactly what you're doing with your fingers — a capability they say could revolutionize the way we interact with simulated objects in virtual reality.

"VR and AR immersion is based on motion capture. Touch is barely there at all,” said Rob Shepard, an engineering professor at Cornell who worked on the glove, in a statement. "Let’s say you want to have an augmented reality simulation that teaches you how to fix your car or change a tire. If you had a glove or something that could measure pressure, as well as motion, that augmented reality visualization could say, 'Turn and then stop, so you don’t overtighten your lug nuts.' There’s nothing out there that does that right now, but this is an avenue to do it."

The prototype glove, as detailed in a new paper published in the journal Science today, can detect deformations including pressure, bending and straining.

The new sensor is made out of fiberoptic sensors that can tell how each finger is shifting based on the optical path of light. An onboard computer sorts the deformations into detailed data about your hand activity.

The glove uses some basic and very inexpensive technology: Bluetooth for wireless data transmission, a lithium ion battery for power, and several LEDs.

"We know that soft matters can be deformed in a very complicated, combinational way, and there are a lot of deformations happening at the same time," said co-author Hedan Bai in the statement. "We wanted a sensor that could decouple these."

The researchers are now investigating if the technology could be used in physical therapy and sports medicine. But perhaps its greatest promise would be to let users in VR interact convincingly with a virtual world.

"This skin is a way to allow ourselves and machines to measure tactile interactions in a way that we now currently use the cameras in our phones," Shepard said. "It’s using vision to measure touch. This is the most convenient and practical way to do it in a scalable way."

Read This Next
From Our Partners
Can't Wait For November 26th? Save On These Pre-Black Friday Doorbusters Deals Now!
From Our Partners
Save on Science Toys And DIY Kits During This Pre-Black Friday Sale
From Our Partners
Augmented Reality Eyewear Is The Future, And It Is Not Too Far Off
From Our Partners
Teach Kids The Joys Of Geography With 15% Off This AR Globe
Brands We Love
The Latest Advancements in VR Sex Are Here in One Convenient Bundle
More on Sci-Fi Visions
Health Revelation
Nov 22 on neoscope
Chris Hemsworth Reveals Grim Genetic Test Results, Will Take Break From Acting
Cybersecurity Dis...
Nov 13 on the byte
Insurance Company Refuses to Pay Ransom, So Hackers Start Releasing Health Records of Up To 10 Million People
PDA
Nov 9 on futurism
Elon Musk Is Faving Posts on Twitter That Are Making Our Skin Crawl With Embarrassment
READ MORE STORIES ABOUT / Sci-Fi Visions
Keep up.
Subscribe to our daily newsletter to keep in touch with the subjects shaping our future.
+Social+Newsletter
TopicsAbout UsContact Us
Copyright ©, Camden Media Inc All Rights Reserved. See our User Agreement, Privacy Policy and Data Use Policy. The material on this site may not be reproduced, distributed, transmitted, cached or otherwise used, except with prior written permission of Futurism. Articles may contain affiliate links which enable us to share in the revenue of any purchases made.
Fonts by Typekit and Monotype.