In a simulation, the system reduced the power required to cool a building by greater than 20%. 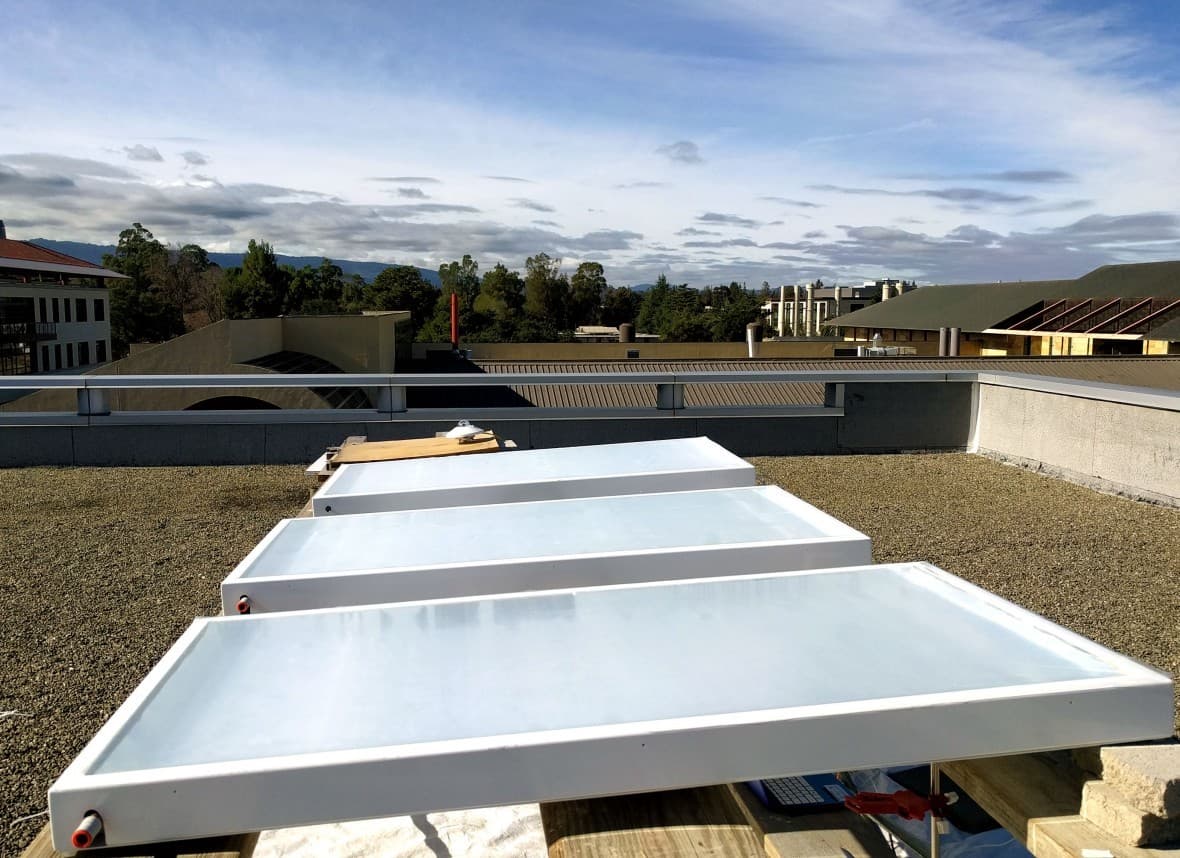 How can you cool a building without using any electricity? By making space do the work for you.

In research recently published in Nature Energy, a group from Stanford University used mirror-like panels to keep a building cool by radiating heat straight back into space.

"If you have something that is very cold — like space — and you can dissipate heat into it, then you can do cooling without any electricity or work. The heat just flows," explained Shanhui Fan, Stanford professor of electrical engineering and senior author of the paper. "For this reason, the amount of heat flow off the Earth that goes to the universe is enormous."

This process is called radiative sky cooling, and it's the same phenomenon you observe when watching heat waves rise from hot pavement. Fan's group has been working on putting this process to use since 2013. Earlier work showed that the team's multi-layer optical film, designed to reflect 97% of sunlight, could keep a surface cool; this made it useful for solar panels, which are less efficient when overheated.

By scaling the system up, Fan's team has shown that it can also make running water colder, which could be piped through walls to cool an entire building.

A simulation of how the system would work atop a hot Las Vegas two-story office building was promising: over the course of a summer, the panels reduced the energy needed to cool the building by greater than 20%, with daily reductions as high as 50%.

Given the high climate costs of generating electricity, this system — which requires no electricity to operate — would not only be cheaper, but also more environmentally friendly.

"With this technology, we're no longer limited by what the air temperature is," said Eli Goldstein, co-lead author of the paper. "We're limited by something much colder: the sky and space."

Read This Next
Space Age
A Drill Built for Mars Will Probe Antarctic Bedrock
Not Atlantis
A Satellite Found Remnants of Lost Continents Under Antarctica
Futurism
Finding Meteorites In Antarctica is Grueling but Worth It
Futurism
Paint That Cools When Exposed to Sunlight Could Help Us on Earth and in Space
Futurism
New Photos From Space Show How Fracking Is Reshaping the Earth's Surface
More on Earth & Energy
Reptilian Revenge
Yesterday on the byte
Saboteur Iguana Causes Mass Power Outage, Then Dies
Drawing the Line
Yesterday on the byte
Satellite Images Show Progress on 100-Mile Long Skyscraper in Saudi Arabia
Shark Week
Yesterday on the byte
Scientists Stumble Upon Huge Graveyard of Sharks, Deep Under Ocean
READ MORE STORIES ABOUT / Earth & Energy
Keep up.
Subscribe to our daily newsletter to keep in touch with the subjects shaping our future.
+Social+Newsletter
TopicsAbout UsContact Us
Copyright ©, Camden Media Inc All Rights Reserved. See our User Agreement, Privacy Policy and Data Use Policy. The material on this site may not be reproduced, distributed, transmitted, cached or otherwise used, except with prior written permission of Futurism. Articles may contain affiliate links which enable us to share in the revenue of any purchases made.
Fonts by Typekit and Monotype.