"We had found their Achilles' heel." 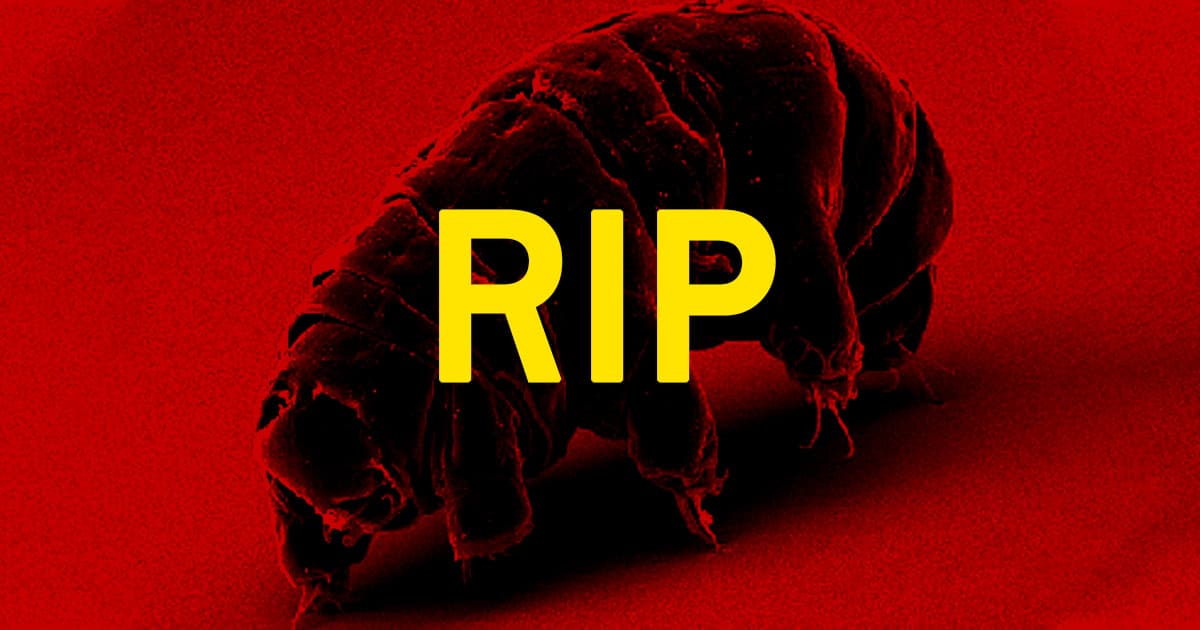 Tardigrades are arguably the most resilient creatures in the known universe — and even they might not be able to live through global warming.

The micro-animals colloquially known as "water bears" are capable of entering a state of suspended animation, bringing their own metabolic activities almost to a halt in response to environmental stressors.

In this death-like state, tardigrades can survive for years in extreme environments, including the vacuum of space. However, a new study out of Denmark has found something tardigrades can't survive: long-term exposure to high temperatures.

"We had found their Achilles' heel," researcher Ricardo Neves, from the University of Copenhagen, told Newsweek. "Tardigrades are definitely not the almost indestructible organism as advertised in so many popular science websites."

For the study, published in the journal Scientific Reports, the researchers sourced a species of tardigrade called Ramazzottius varieornatus from rain gutters in Denmark. They then coaxed some of the critters into one of their states of suspended animation called "desiccation," which they enter in response to a lack of water in their environment, and left others active.

When the scientists exposed the active tardigrades to a temperature of 37.1 degrees Celsius (98 degrees Fahrenheit) for 24 hours, 50 percent died. If exposed to lower temperatures first and given time to acclimate, the active tardigrades didn't hit that 50 percent mortality threshold until 37.6 degrees Celsius (99.7 degrees Fahrenheit).

"The fact that the median lethal temperature for active R. varieornatus is so close to the median maximum temperature in Denmark — where the specimens used in this study have been sampled — is quite worrying in our opinion," Neves told Newsweek, adding that "it seems that even tardigrades will have a hard time handling rising temperatures due to global warming."

Still, while it's undeniably troubling that the practically indestructible tardigrade's kryptonite is the very thing now threatening our own existence, it is worth reiterating that the desiccated tardigrades' temperature threshold was far higher than Earth's current average.

Maybe the stress of extreme climate change will force some surviving tardigrades into one of their states of suspended animation — where they can try to outlast humans, and perhaps even climate change, entirely.

Read This Next
Tardigrade Silliness
Scientists Claim to Entangle Entire Animal in Quantum State
The Climate Guy
Bill Nye Warns About Impending Collapse of "Doomsday Glacier"
Futurism
Scientific Evidence Suggests That Human Cities Are Spawning New Species
Futurism
How to Effectively Talk Science With A Denier
Futurism
A New Vaccine Could Eradicate Flesh-Eating Parasites
More on Hard Science
Tractor Beam
Thursday on the byte
Scientists Build Working Tractor Beam, Although It's Comically Tiny
Having a Blast
Jan 18 on the byte
New Study Shows Where You Should Hide to Survive a Nuclear Attack
Offworld Amino
Jan 15 on the byte
Scientists Find Building Blocks of Life in Meteor That Smashed Into Family's Driveway
READ MORE STORIES ABOUT / Hard Science
Keep up.
Subscribe to our daily newsletter to keep in touch with the subjects shaping our future.
+Social+Newsletter
TopicsAbout UsContact Us
Copyright ©, Camden Media Inc All Rights Reserved. See our User Agreement, Privacy Policy and Data Use Policy. The material on this site may not be reproduced, distributed, transmitted, cached or otherwise used, except with prior written permission of Futurism. Articles may contain affiliate links which enable us to share in the revenue of any purchases made.
Fonts by Typekit and Monotype.