Or, perhaps, it could just give Ukraine its power plant back. 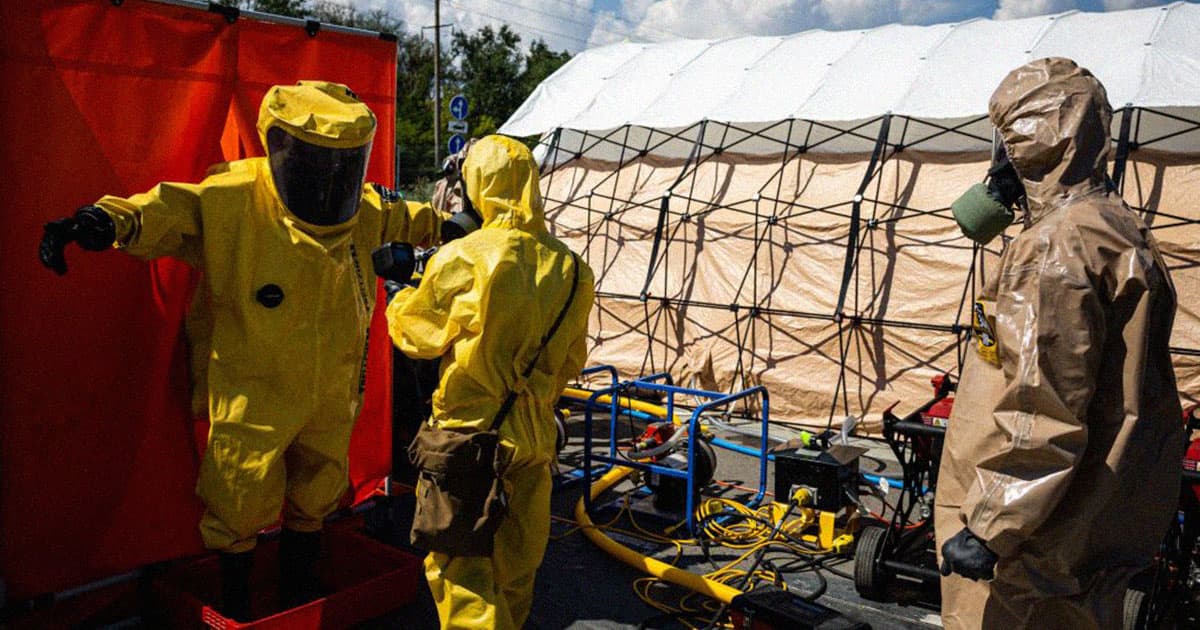 Russia's Ministry of Defense has warned that the nuclear power plant it's currently occupying in southern Ukraine could suffer damage and result in an accident if shelling continues, CNBC reports.

The news comes after both Russia and Ukraine have accused each other of attacking the Zaporizhzhia nuclear power plant — the largest nuclear power plant on the continent. The bottom line, of course, is that there's be no fighting there at all if Russia hadn't invaded Ukraine this year.

Igor Kirillov, the head of Russia’s radioactive, chemical and biological defense forces, told Reuters that the nuclear plant's backup support systems were damaged as a result of Ukraine's actions. According to Kirillov, an accident could cause radioactive material to cover Germany, Poland, and Slovakia.

Russian forces occupied the facility in March, holding Ukrainian employees at the site at gunpoint. The latest accusations and finger pointing serve as a dangerous escalation.

Ukrainian officials recently accused Russia of using the plant as "a shield," because Ukrainian forces wouldn't dare strike the facility.

"The Ukrainian Armed Forces know that these are Ukrainian personnel and this is a Ukrainian plant and there are Ukrainian people [there] so we aren't going to kill our people, our staff and damage our infrastructure," Petro Kotin, head of Energoatom, Ukraine's state enterprise in charge of operating the country's nuclear plants, told the BBC earlier this month.

It's a precarious situation. According to CNBC, while an accident can't technically result in the kind of meltdown that caused the Chernobyl disaster in 1986, the risks are still high. If containment walls were to be breached, radioactive material, including from spent fuel pools, could leak.

And that has the international community worried. Last week, officials from the International Atomic Energy Agency (IAEA), the United Nation's nuclear watchdog, said they were alarmed by Russia's bombing near the nuclear power plant.

"This is a serious hour, a grave hour and the IAEA must be allowed to conduct its mission to Zaporizhzhia as soon as possible," IAEA director general Rafael Mariano Grossi told the UN's Security Council last week, as quoted by Reuters.

Yet Russia maintains that Ukrainian forces are shelling the site themselves, potentially risking a catastrophe.

On Twitter, Ukrainian presidential adviser Mykhailo Podolyak pointed out an obvious solution: "You simply have to remove the UF from shops, demine buildings, release the workers, stop shelling from the [power plant complex] and leave the station."

More on the situation: Officials Beg Russia to Stop Bombing Near Europe's Largest

Read This Next
Burning Bridges
Elon Musk Says He Can't Give Free Starlink to Ukraine Anymore After Officials There Were Mean to Him
Read the Room
Elon Musk Fans Horrified as He Suggests Ukraine Give in to Putin's Demands
Sobering News
Ukrainian Hackers Allegedly Cut Off Russian Soldiers' Beloved Vodka Supply
Hell on Earth
Internet Aghast at AI Facial Recognition Used to Identify Dead Russian Soldiers
Face It
Ukraine Reportedly Using Facial Recognition to Send Photos of Dead Russian Soldiers to Their Mothers
More on Future Society
Rough
Yesterday on futurism
Elon Musk's Twitter Is Reportedly Failing Miserably to Contain Horrific Child Abuse Content
YouTube Propaganda
Yesterday on the byte
Experts Say There's Something Very Weird About North Korean YouTubers
Bird Crap
Feb 4 on the byte
It Looks Like Elon Musk Is Actually Building a Twitter Payment Platform
READ MORE STORIES ABOUT / Future Society
Keep up.
Subscribe to our daily newsletter to keep in touch with the subjects shaping our future.
+Social+Newsletter
TopicsAbout UsContact Us
Copyright ©, Camden Media Inc All Rights Reserved. See our User Agreement, Privacy Policy and Data Use Policy. The material on this site may not be reproduced, distributed, transmitted, cached or otherwise used, except with prior written permission of Futurism. Articles may contain affiliate links which enable us to share in the revenue of any purchases made.
Fonts by Typekit and Monotype.