This is a terrible look, Elon. 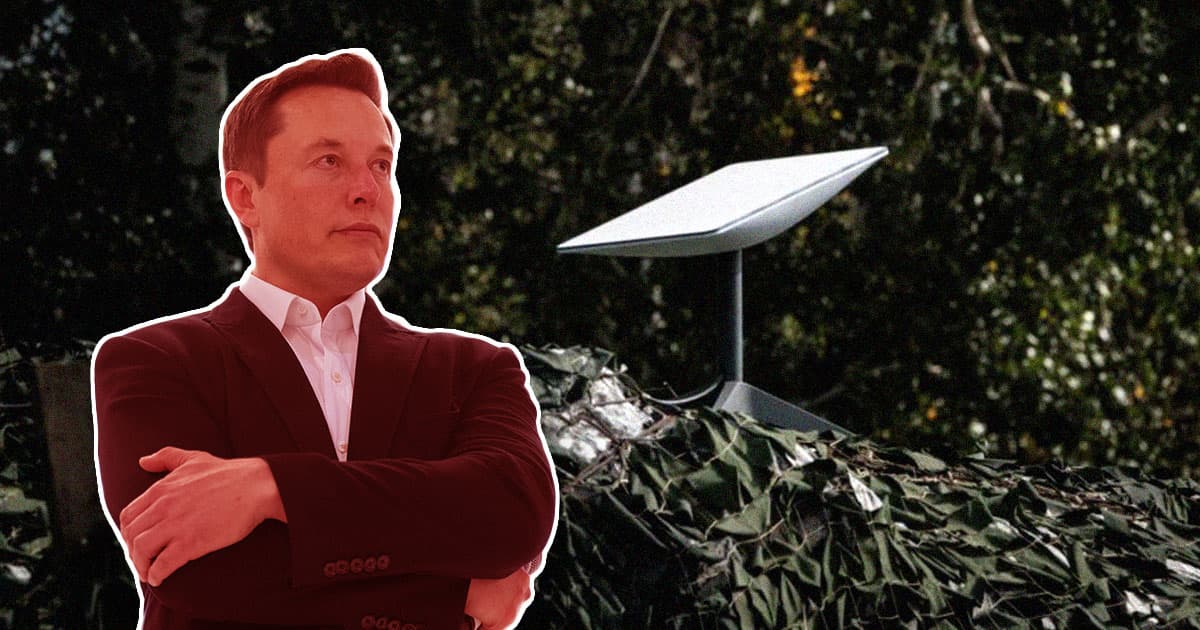 During the early days of Russia's invasion of Ukraine, SpaceX CEO Elon Musk announced that the company would be sending thousands of Starlink satellite internet terminals to the embattled country.

Around 20,000 terminals, according to Musk, have already been donated to Ukraine so far.

Now, though, Musk has seemingly had a change of heart, and is asking the Pentagon to foot the bill instead. It's just become too expensive, he says — although the real reason may have more to do with Musk's growing sympathy toward Russia.

"SpaceX is not asking to recoup past expenses, but also cannot fund the existing system indefinitely *and* send several thousand more terminals that have data usage up to 100X greater than typical households," Musk tweeted. "This is unreasonable."

The news comes following reports of Starlink outages plaguing Ukraine's attempts to retake ground previously occupied by Russia. According to officials, these outages led to a "catastrophic" loss of communication, as The Financial Times reports.

The terminals allowed troops and civilians alike to stay connected and ended up "saving lives," as vice prime minister Mykhailo Federov argued back in March.

Despite considerable goodwill, Musk suddenly changed his tune. Earlier this month, the billionaire suggested that Ukraine should give up parts of its territories to reach a peace agreement with Russia — or else risk starting a nuclear war — a shocking Twitter outburst that had even his own diehard fans appalled.

Ukrainian officials were also unsurprisingly taken aback by Musk's comments, with Ukrainian diplomat Andriy Melnyk literally telling the richest man in the world to "f*** off."

Meanwhile, the Kremlin lauded Musk for his new tack, with Russian presidential Press Secretary Dmitry Peskov saying that it was "actually quite positive" that Musk was, "unlike professional diplomats," seeking "a path towards peacefully resolving the situation."

In yet another tweet, Musk seemed to confirm that he's indeed ending the free service at least in part because Ukrainian officials were mean to him.

"We’re just following his recommendation," Musk replied with a shrug emoji, after political strategist Jason Jay Smart pointed out the fact that Musk announced his change of heart just days after Melnyk told him to "f*** off."

At the same time, CNN points out that SpaceX did send a letter to the Pentagon asking for funding before Melnyk's comments. So money may well be a factor as well.

It's an unfortunate new development as the terminals are clearly proving to be a huge help for the people of Ukraine — and this kind of vindictive mudslinging isn't going to help anybody.

More on the situation: Elon Musk Fans Horrified as He Suggests Ukraine Give in to Putin's Demands

Read This Next
Abso-Effing-Lutely
Free Speech Absolutist Elon Musk Discovers That Some Speech Is Unacceptable After All
Be Better
Elon Musk Reportedly Slashed the Team That Fights Child Sexual Abuse on Twitter
Head Like A Hole
Elon Musk's Crying About Trent Reznor Shows That He Is a Big, Big Baby
Secrets Secrets
Elon Musk Vigorously Denies That SBF Secretly Owns Part of Twitter
Good Time to Leave
Panicked Elon Musk Reportedly Begging Engineers Not to Leave
More on Future Society
Unorthodox Urinal
Friday on the byte
Scientists Say They've Figured Out the Ideal Urinal for Not Splashing Back
Might See Nonsense
Friday on futurism
MSN Fired Its Human Journalists and Replaced Them With AI That Started Publishing Fake News About Mermaids and Bigfoot
Break Out in Hives
Thursday on futurism
Twitter Competitor Shuts Down App When It Turns Out Hackers Can Read Users' Private Messages
READ MORE STORIES ABOUT / Future Society
Keep up.
Subscribe to our daily newsletter to keep in touch with the subjects shaping our future.
+Social+Newsletter
TopicsAbout UsContact Us
Copyright ©, Camden Media Inc All Rights Reserved. See our User Agreement, Privacy Policy and Data Use Policy. The material on this site may not be reproduced, distributed, transmitted, cached or otherwise used, except with prior written permission of Futurism. Articles may contain affiliate links which enable us to share in the revenue of any purchases made.
Fonts by Typekit and Monotype.