“He prohibited his employees to go abroad, correctly understanding they might not return.” 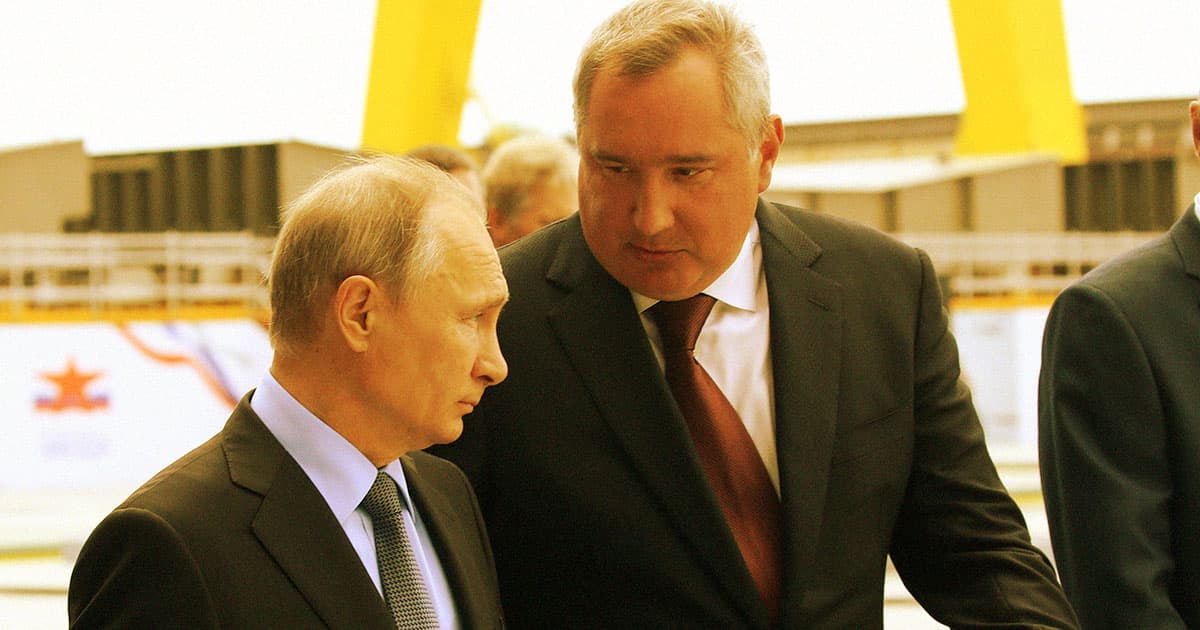 As the invasion of Ukraine continues into yet another bloody day of fighting, Russia is struggling with a battle much closer to home: brain drain. That's the phenomenon that occurs when academics, scientists, doctors, and other educated people leave a region en masse.

Russia has been dealing with brain drain for years now. However, with severe economic sanctions and draconian restrictions on free speech imposed on the country following Putin’s invasion of Ukraine, it’s been contending with a massive new spike of people trying to leave.

So it should come as no surprise then that Dmitiry Rogozin, the erratic head of the country’s space program Roscosmos, has allegedly forbidden agency employees from being able to travel abroad.

The order itself was spotted by Kamil Galeev, a Moscow-based journalist and Galina Starovoitova Fellow on Human Rights and Conflict Resolution at the Wilson Center. On Wednesday, he tweeted an alleged picture of the order, which was dated February 28, 2022 — mere days after the initial invasion of Ukraine.

State owned companies use the stick directly and prohibit their workers to leave the country. Consider this executive order by Rogozin, the CEO of a state owned Roskosmos aerospace company. He prohibited his employees to go abroad, correctly understanding they might not return pic.twitter.com/Q2TSxDw9wX

He later added that border guards in Russia are instructed to stop IT and computer engineers specialists from leaving the country.

The move would be absolutely in line with what we’ve seen from Rogozin so far during the conflict. Since the invasion began in late February, he’s taken to Twitter to post a seemingly endless stream of pro-Putin and anti-US propaganda. He’s even feuded with NASA figures such as astronaut Scott Kelly.

So his alleged directive attempting to keep Roscosmos employees in Russia really is no surprise. But while it might work in the short term, it certainly doesn’t bode well for the country’s future.

"In the long run, brain drain might be the most important problem for Russia," when it comes to its economic future, Nikolai Roussanov, an economics professor at the University of Pennsylvania, told Insider. He later added that the brain drain would "accelerate, especially as foreign academic institutions break off their relationships with Russian ones."

More on Russia: Another NASA Astronaut Just Brutally Roasted the Head of the Russian Space Program

Read This Next
Read the Room
Elon Musk Fans Horrified as He Suggests Ukraine Give in to Putin's Demands
Finger Pointing
Russia Warns That Nuclear Plant It Captured May Leak Waste Over Europe
Sobering News
Ukrainian Hackers Allegedly Cut Off Russian Soldiers' Beloved Vodka Supply
Hell on Earth
Internet Aghast at AI Facial Recognition Used to Identify Dead Russian Soldiers
Fake Surrender
Hackers Deepfaked a Video of the Ukrainian President Telling His Soldiers to Surrender
More on Future Society
Rough
Yesterday on futurism
Elon Musk's Twitter Is Reportedly Failing Miserably to Contain Horrific Child Abuse Content
YouTube Propaganda
Yesterday on the byte
Experts Say There's Something Very Weird About North Korean YouTubers
Bird Crap
Feb 4 on the byte
It Looks Like Elon Musk Is Actually Building a Twitter Payment Platform
READ MORE STORIES ABOUT / Future Society
Keep up.
Subscribe to our daily newsletter to keep in touch with the subjects shaping our future.
+Social+Newsletter
TopicsAbout UsContact Us
Copyright ©, Camden Media Inc All Rights Reserved. See our User Agreement, Privacy Policy and Data Use Policy. The material on this site may not be reproduced, distributed, transmitted, cached or otherwise used, except with prior written permission of Futurism. Articles may contain affiliate links which enable us to share in the revenue of any purchases made.
Fonts by Typekit and Monotype.