Richard Stallman just inserted himself into the Epstein scandal in the worst possible way. 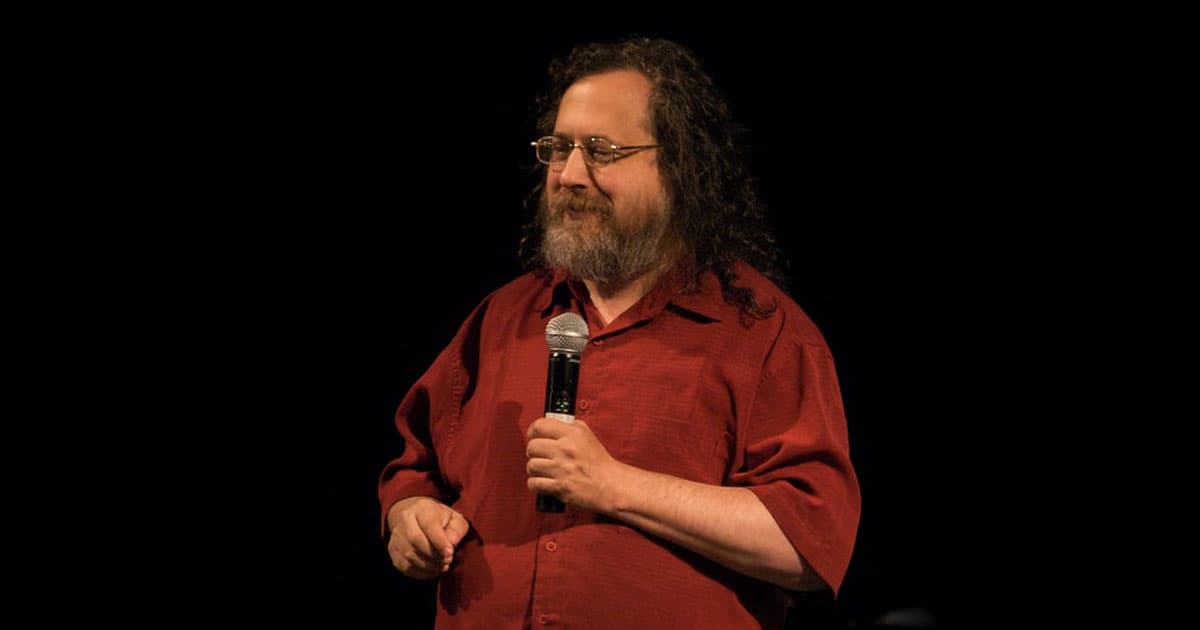 Since the July arrest of Jeffrey Epstein on charges of sex trafficking, a number of huge names in the world of tech — from Bill Gates to Elon Musk — have attempted to defend or deny any inkling of a relationship with the financier.

But one prominent computer scientist is seemingly going out of his way to insert himself into the scandal: MIT Visiting Scientist Richard Stallman.

MIT accepted millions of dollars in funding from Epstein, prompting one student group to organize a protest calling for the resignation of any senior MIT administrators who knew about the donations.

In the details of the Facebook event for that protest, the students noted that late MIT professor Marvin Minsky "is accused of assaulting one of Epstein’s victims." They included a link to a story by The Verge that cited the deposition of a woman who said that she was forced to have sex with Minsky at Epstein's compound when she was 17 and the MIT professor was in his seventies.

On Thursday, MIT graduate Selam Jie Gano published a Medium post including excerpts from an email that Stallman reportedly sent to an MIT CSAIL mailing list in response to the protest.

"The word 'assaulting' presumes that he applied force or violence, in some unspecified way," Stallman wrote in the email, "but the article itself says no such thing. Only that they had sex."

Had Stallman checked the legal definition of sexual assault prior to penning his email, he would know that the Department of Justice defines it as "a nonconsensual sexual act proscribed by Federal, tribal, or State law, including when the victim lacks capacity to consent."

As a 17-year-old in the Virgin Islands, Minsky's alleged victim automatically lacked that capacity to consent — hence, sexual assault.

After that, Stallman went on to say the member of "Epstein’s harem" likely presented herself to Minsky as "entirely willing."

Gano takes Stallman to task for his tone-deaf defense of the sexual assault accusations against Minsky in her post — then calls on MIT to "remove men like Richard Stallman" from its ranks.

"This behavior cannot go unchecked, simply because someone is seen as a 'genius,'" Gano wrote. "Simply because they are powerful, influential, or have friends in high places. Those are the same forces that allowed Jeffrey Epstein to rape and traffick children for so long."

"Remove everyone, if we must," she later adds, "and let something much better be built from the ashes."

Read This Next
Evil Personified
Melinda Gates Slams Ex-Husband for Friendship With "Abhorrent" Jeffrey Epstein
Lolita Express
Jeffrey Epstein's Private Pilot Says Famed NASA Astronaut Rode on His Jet
Slippery Slope
Apple Will Scan Every iPhone for Images of Child Sexual Abuse
Gates Closed
Bill Gates Reportedly Left Microsoft Board Amid Sex Allegations
Hush Funds
MIT Media Lab Hid Donations From Sex Offender Jeffrey Epstein
More on Future Society
Musk Rats
Yesterday on the byte
Twitter Is Quietly Re-Suspending the Lunatics Elon Musk Let Back On
Going Wireless
Wednesday on futurism
Hackers Took Over a Subdomain of Wired.com for Several Months and Replaced It With Sleazy Online Casino Content
Spreadsheet Guy
Tuesday on the byte
Sam Bankman-Fried Posts Excel Docs That He Says Shows Nothing Was His Fault
READ MORE STORIES ABOUT / Future Society
Keep up.
Subscribe to our daily newsletter to keep in touch with the subjects shaping our future.
+Social+Newsletter
TopicsAbout UsContact Us
Copyright ©, Camden Media Inc All Rights Reserved. See our User Agreement, Privacy Policy and Data Use Policy. The material on this site may not be reproduced, distributed, transmitted, cached or otherwise used, except with prior written permission of Futurism. Articles may contain affiliate links which enable us to share in the revenue of any purchases made.
Fonts by Typekit and Monotype.