New Research: Mars May Have Once Had Rings

The strange orbit of one of Mars' moons may reveal a fascinating secret history. 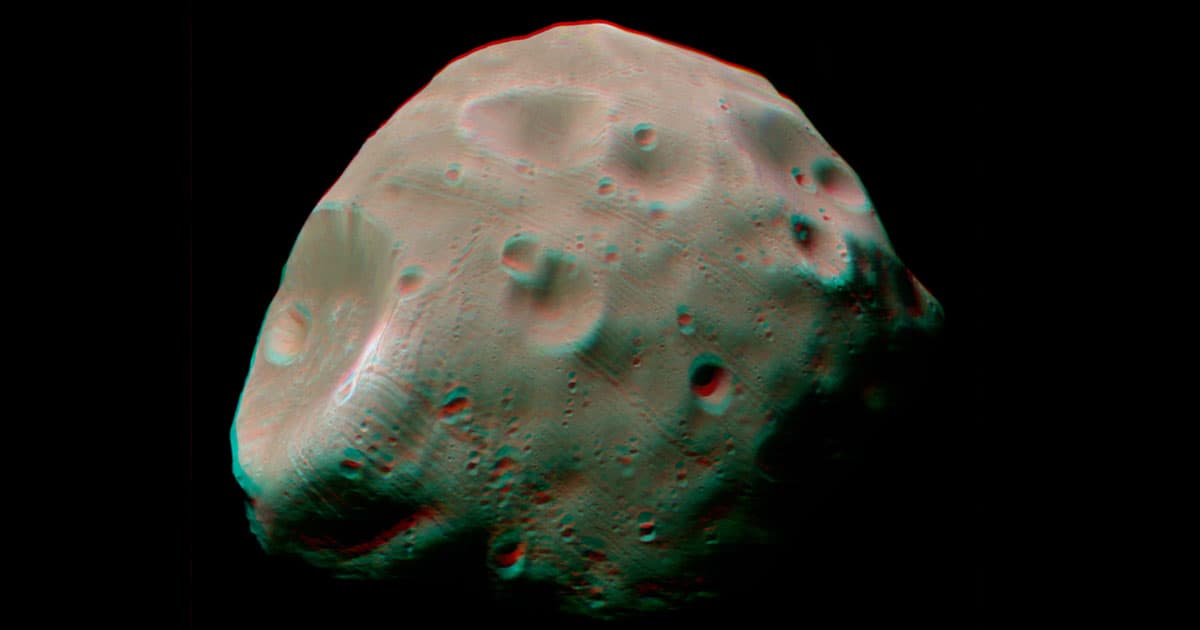 Two of Mars' moons, Phobos and Deimos, have mysterious orbits.

Deimos in particular, which orbits the Red Planet so closely that it circles the planet three times in just a single Earth day, has astronomers puzzled. Its orbit is at a two degree angle, something that researchers have mostly glossed over — until now.

"The fact that Deimos’s orbit is not exactly in plane with Mars’s equator was considered unimportant, and nobody cared to try to explain it," Matija Ćuk, research scientist at the SETI Institute, and lead author of a new preprint presented this week at the 236th Meeting of the American Astronomical Society, said in a statement.

"But once we had a big new idea and we looked at it with new eyes, Deimos’s orbital tilt revealed its big secret," Ćuk added.

Building on existing research from 2017, the researchers found that Deimos will likely be split up into tiny rocks as it's slowly being pulled towards Mars, forming a ring around the planet.

This builds on a theory that previous moons of the Red Planet have already seen their demise, and broken up into rings, over billions of years.

The researchers suggest that a "grandparent" moon, 20 times as large as Phobos, could have broken up and reformed twice, creating Phobos the second time around. This outward-moving moon also caused Deimos to start its journey inwards, gradually approaching the Martian surface.

This "cyclic ring-moon" theory implies that Deimos is far older than Phobos; billions of years compared to only about 200 million years respectively. It also suggests that Mars had a significant ring around it billions of years ago.

But as of right now, it's only a theory. The Japanese Aerospace Exploration Agency (JAXA) is planning on visiting both Phobos and Deimos as soon as 2024 to return a sample back to Earth.

Only then will we be able to tell more about the origins of the oddball moons — and shed light on the possibility that Mars was once surrounded by a moon-forming ring in the process.

READ MORE: Mars' moons may hint that the planet once had rings [CNN]

Read This Next
What Lies Beneath
Researchers Say "Conan the Bacterium" Could Be Hidden Beneath Mars’ Surface
Water Canyon
Scientists Spot Hidden Water in Mars' Grand Canyon
Martian Ammonia
NASA Rover Detects Organic Molecules on the Surface of Mars
Joseph Strikes Again
Experts Shred Paper Claiming to Identify Mushrooms on Mars
Mars Shrooms
Extremely Dubious Research Claims to Spot Fungus Growing on Mars
More on Hard Science
Tractor Beam
Yesterday on the byte
Scientists Build Working Tractor Beam, Although It's Comically Tiny
Having a Blast
Jan 18 on the byte
New Study Shows Where You Should Hide to Survive a Nuclear Attack
Offworld Amino
Jan 15 on the byte
Scientists Find Building Blocks of Life in Meteor That Smashed Into Family's Driveway
READ MORE STORIES ABOUT / Hard Science
Keep up.
Subscribe to our daily newsletter to keep in touch with the subjects shaping our future.
+Social+Newsletter
TopicsAbout UsContact Us
Copyright ©, Camden Media Inc All Rights Reserved. See our User Agreement, Privacy Policy and Data Use Policy. The material on this site may not be reproduced, distributed, transmitted, cached or otherwise used, except with prior written permission of Futurism. Articles may contain affiliate links which enable us to share in the revenue of any purchases made.
Fonts by Typekit and Monotype.