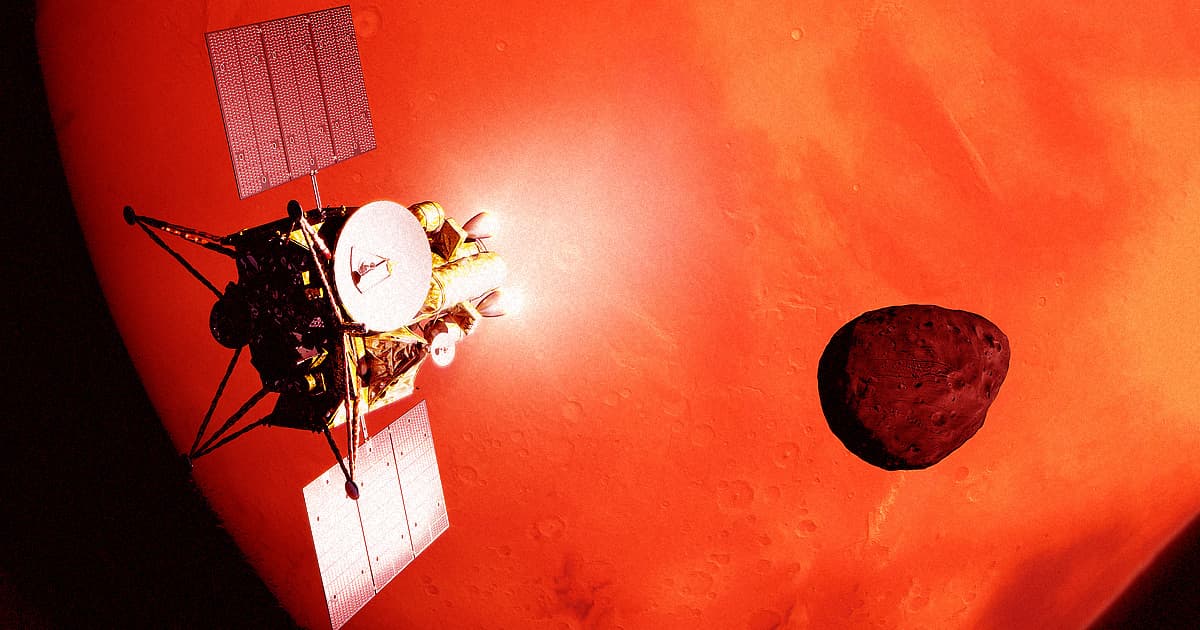 It could become the first ever spacecraft to make it to the Martian system and back.

It could become the first ever spacecraft to make it to the Martian system and back.

Japanese space agency JAXA announced today it has greenlit a sample return mission to the Martian moon Phobos called the Martian Moons Exploration mission (MMX). If it's successful, it could result in the first vehicle in the history of space travel that's made it to the Martian system and back home, here, to Earth.

Our MMX mission officially proceeds to the development phase today 🆕🛰! Please keep checking our twitter and website as we continue to develop the spacecraft ✨

The plan is to launch a spacecraft to the moon in 2024, and then, spend three years surveying both of Mars' moons, Phobos and Deimos. The idea's to create a detailed map of both moons' surfaces, using 11 (11!) instruments the craft will be equipped with to do so.

If all goes well, the spacecraft will collect a ground sample of just ten grams from at least two centimeters below the moon's surface before taking the long trip home.

The mission could answer a pretty simple question: How did both of Mars' moons form? Are they asteroids trapped in Mars' gravity, or did they split off the Red Planet after a violent event?

Scientists also want to know how Mars acquired its water during its suspected Earth-like environment phase that took place eons ago. By investigating the composition of the planet's two moons, scientists are hoping to understand Mars' evolution better.

Water Canyon
Scientists Spot Hidden Water in Mars' Grand Canyon
12. 15. 21
Read More
Martian Ammonia
NASA Rover Detects Organic Molecules on the Surface of Mars
11. 2. 21
Read More
Joseph Strikes Again
Experts Shred Paper Claiming to Identify Mushrooms on Mars
5. 7. 21
Read More
+Social+Newsletter
TopicsAbout UsContact Us
Copyright ©, Camden Media Inc All Rights Reserved. See our User Agreement, Privacy Policy and Data Use Policy. The material on this site may not be reproduced, distributed, transmitted, cached or otherwise used, except with prior written permission of Futurism. Articles may contain affiliate links which enable us to share in the revenue of any purchases made.
Fonts by Typekit and Monotype.