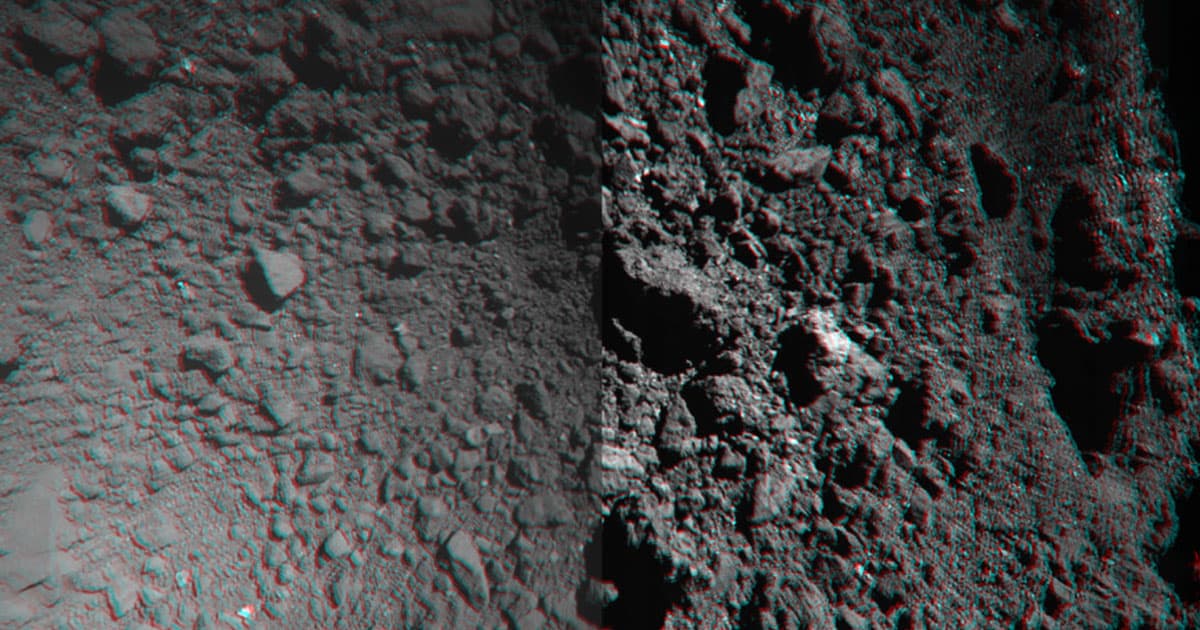 The spacecraft left a 10-meter crater when it bombed the asteroid's surface in April.

The spacecraft left a 10-meter crater when it bombed the asteroid's surface in April.

Japan's Hayabusa2 spacecraft returned to the site where it bombed the asteroid Ryugu to scoop up samples of rocks on July 10. And now, the Japan Aerospace Exploration Agency (JAXA) has released epic footage of the historic event.

The images that make up the video were taken at intervals between half a second and five seconds, during the period when the spacecraft was between 8.5 and 150 meters above the asteroid's surface.

The space probe has been in the tiny asteroid's orbit since June 2018, where it has been trying to dislodge rock samples by shooting a bullet and tossing an explosive at the space rock. The plastic explosive left a 10 meter crater in the kilometer-wide asteroid.

Haybusa2 is still planning to release a future lander on the asteroid's surface before embarking on its lengthy return trip back to Earth in December 2020. It will also be attempting to drop ROVER-2, a small robot that's equipped with a thermometer and multiple cameras.

Asteroid Blasters
Giant Asteroid Hits Europe After NASA Fails to Stop It, In a Simulation
5. 3. 21
Read More
This Week in Science: Sept 22-28
9. 28. 18
Read More
The Physics of Black Holes Must Wait, Satellite Delayed
2. 14. 16
Read More
+Social+Newsletter
TopicsAbout UsContact Us
Copyright ©, Camden Media Inc All Rights Reserved. See our User Agreement, Privacy Policy and Data Use Policy. The material on this site may not be reproduced, distributed, transmitted, cached or otherwise used, except with prior written permission of Futurism. Articles may contain affiliate links which enable us to share in the revenue of any purchases made.
Fonts by Typekit and Monotype.