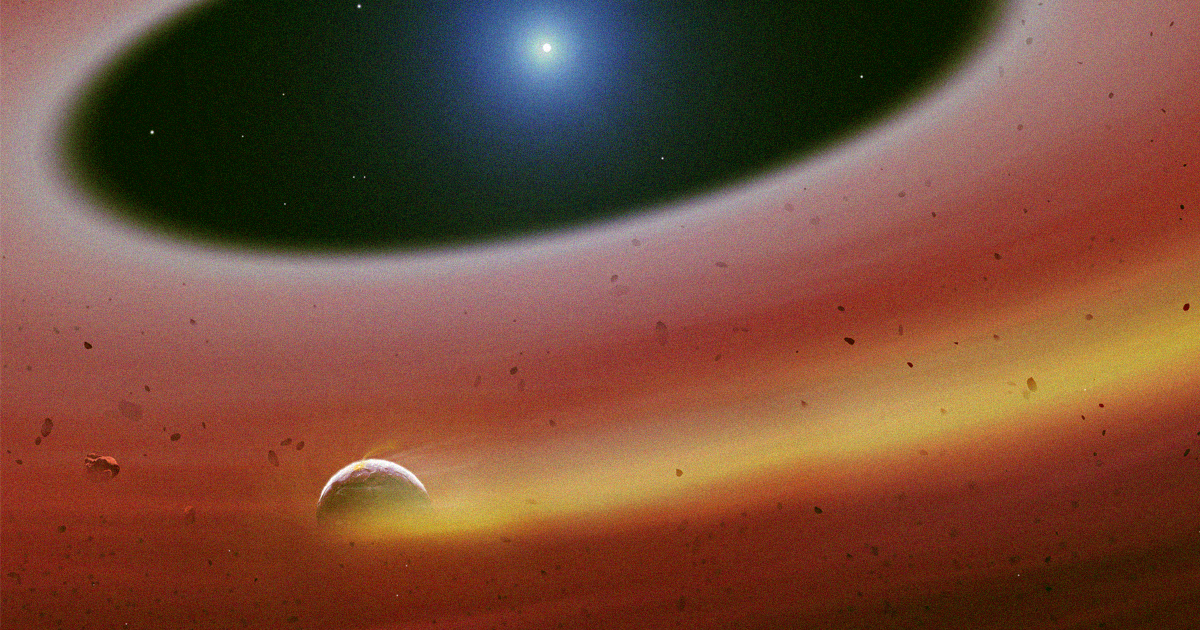 Image by Via University of Warwick/Mark Garlick

The death of its star wasn't enough to destroy a planet 400 light years away from Earth. Not totally, anyway.

For just the second time ever, astronomers have found a fragment of a planet circling around one of the small, dense remains of a star known as a white dwarf.

Even cooler: This is the first such discovery made using spectroscopy, a technique that could make it far easier to detect similar fragments in the future — and astronomers believe those fragments could help us better understand not only other solar systems, but also our own.

The first time astronomers detected a solid body orbiting a white dwarf, they did so using the "transit method'' — essentially, they were looking at just the right place when the fragment passed between the white dwarf and the Earth, which caused a detectable dip in the light from the star.

In a study published in the journal Science on Thursday, astronomers from the University of Warwick detail how they used the Gran Telescopio Canarias in La Palma to study a star with the not-at-all-pithy moniker SDSS J122859.93+104032.9.

This time, they used spectroscopy to analyze the gas around the star, leading to the discovery of the planet fragment.

According to their study, the fragment is likely at least one kilometer (.62 miles) wide, but its diameter could be as much as a few hundred kilometers (186 miles). It's positioned extremely close to the white dwarf, making a full orbit around it every two hours, and it was likely able to survive the destruction of its planetary system thanks to a sturdy iron and nickel composition.

Researcher Christopher Manser said in a press release that the team already knows of several other solar systems with debris discs similar to that of SDSS J122859.93+104032.9, so they plan to begin looking for fragments around those next.

"We are confident that we will discover additional planetesimals orbiting white dwarfs," Manser said, "which will then allow us to learn more about their general properties."

And given that our own Sun will one day die, anything that we can learn about white dwarfs will essentially help us better understand the future of our own solar system.

More on white dwarfs: In About 10 Billion Years, Our Sun Will Harden Into a Giant Crystal

Read This Next
Hubble Tension
Most Precise Measurements of the Universe Suggest That Something Is Very Wrong
Satan's Butthole
The Sharpest-Ever Image of a Sunspot Looks Like a Portal to Hell
Tiny Flares
Scientists Found Something Surprising in Closest-Ever Photos of the Sun
Yeet!
This Star Appears to Have Survived a Supernova
Planet Nein
Astronomers Want to Figure Out What the Hell Planet Nine Is Once and For All
More on Hard Science
Tractor Beam
Jan 26 on the byte
Scientists Build Working Tractor Beam, Although It's Comically Tiny
Having a Blast
Jan 18 on the byte
New Study Shows Where You Should Hide to Survive a Nuclear Attack
Offworld Amino
Jan 15 on the byte
Scientists Find Building Blocks of Life in Meteor That Smashed Into Family's Driveway
READ MORE STORIES ABOUT / Hard Science
Keep up.
Subscribe to our daily newsletter to keep in touch with the subjects shaping our future.
+Social+Newsletter
TopicsAbout UsContact Us
Copyright ©, Camden Media Inc All Rights Reserved. See our User Agreement, Privacy Policy and Data Use Policy. The material on this site may not be reproduced, distributed, transmitted, cached or otherwise used, except with prior written permission of Futurism. Articles may contain affiliate links which enable us to share in the revenue of any purchases made.
Fonts by Typekit and Monotype.