The Sun is a truly chaotic place. 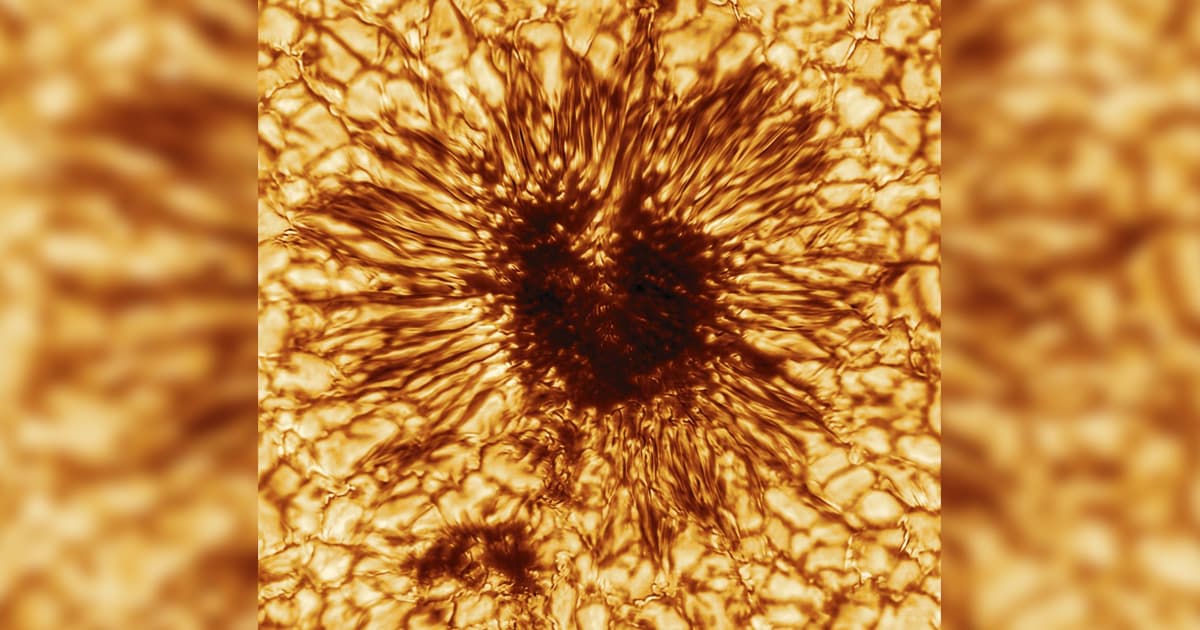 The US National Science Foundation's Daniel K. Inouye Solar Telescope, the largest solar observatory in the world, just released its first-ever image of a sunspot.

The image, taken in January 2020, is the sharpest image of a sunspot in history — and it looks absolutely terrifying.

"The sunspot image achieves a spatial resolution about 2.5 times higher than ever previously achieved, showing magnetic structures as small as 20 kilometers on the surface of the sun," associate director at NSF's National Solar Observatory Thomas Rimmele, lead author of the corresponding paper published in the journal Solar Physics, said in a statement.

A sunspot is a dark area on the Sun's surface. Scientists suspected that they're caused by magnetic field flux which cause surrounding areas to cool temporarily.

Their size can be extraordinary. The new Inouye image, for instance, is 10,000 miles across — large enough to fit the entire Earth comfortably inside it.

The image shows hot and cool gas emanating from the dark center while hot gases bubble up from below the surface. Despite being relatively cool, the dark areas in the center still measure above a toasty 7,500 degrees Fahrenheit.

Roughly every 11 Earth years, the Sun starts a new cycle of solar activity. The image represents one of the first sunspots of a solar cycle that began in December 2019.

Sunspots are similar to solar flares and coronal mass ejections, which are massive bursts of plasma and magnetic fields from the Sun's corona, the outer part of its atmosphere.

These massive outbursts can be so violent, their effects on space weather can be felt all the way back on Earth, where they wreak havoc on power grids, GPS satellites, and even air travel.

In other words, studying these phenomena could help us refine our tools and make them more resistant to freak events in space weather.

More on the observatory: The Highest Def Photo of the Sun Looks Like Caramel Popcorn

Read This Next
Tiny Flares
Scientists Found Something Surprising in Closest-Ever Photos of the Sun
Say Cheese
A Space Probe Just Took the Closest Pictures of the Sun Ever
IRL Icarus
Scientists Mystified: Sun's Magnetic Field Appears to be Flipping
Lonely Planetesimal
Astronomers Discover Fragment of Planet Orbiting Its Dead Star
Futurism
The Sun Is Slowly Expanding. How Can We Stop It From Killing Us All?
More on Hard Science
Tractor Beam
Jan 26 on the byte
Scientists Build Working Tractor Beam, Although It's Comically Tiny
Having a Blast
Jan 18 on the byte
New Study Shows Where You Should Hide to Survive a Nuclear Attack
Offworld Amino
Jan 15 on the byte
Scientists Find Building Blocks of Life in Meteor That Smashed Into Family's Driveway
READ MORE STORIES ABOUT / Hard Science
Keep up.
Subscribe to our daily newsletter to keep in touch with the subjects shaping our future.
+Social+Newsletter
TopicsAbout UsContact Us
Copyright ©, Camden Media Inc All Rights Reserved. See our User Agreement, Privacy Policy and Data Use Policy. The material on this site may not be reproduced, distributed, transmitted, cached or otherwise used, except with prior written permission of Futurism. Articles may contain affiliate links which enable us to share in the revenue of any purchases made.
Fonts by Typekit and Monotype.