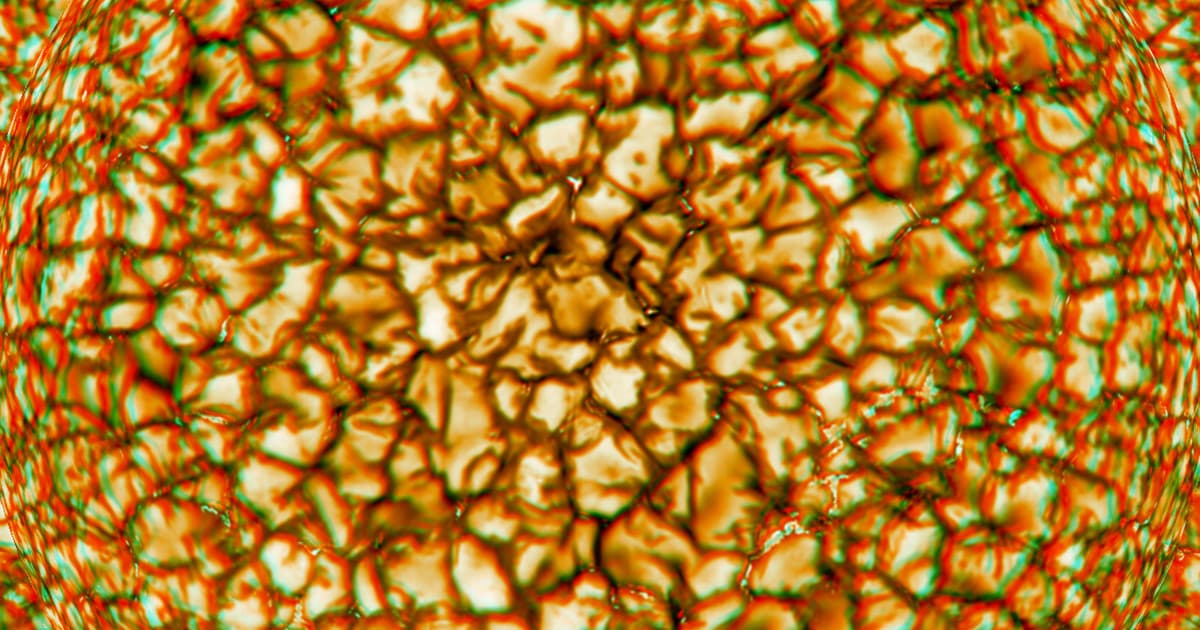 The Highest Def Photo of the Sun Looks Like Caramel Popcorn

Scientists just released the highest resolution images of the Sun's surface ever taken, obtained with the National Science Foundation's (NSF) Inouye Solar Telescope (DKIST) in Hawaii, the largest solar telescope in the world.

"This telescope will improve our understanding of what drives space weather and ultimately help forecasters better predict solar storms," director of the US National Solar Observatory (NSO) France Córdova said in a statement.

The images show patterns of the turbulent plasma that covers the entire Sun. Each visible cell is about the size of Texas. Hot plasma rises in the center of each cell and cools as it sinks back below the surface, forming the dark lines surrounding the cells — a process known as convection.

"What we previously thought looked like a bright point – one structure – is now breaking down into many smaller structures," Thomas Rimmele, the director of the Inouye solar telescope project told The Guardian.

Now, the team operating the telescope is preparing it for use by the international solar scientific community.

"The Inouye Solar Telescope will collect more information about our Sun during the first 5 years of its lifetime than all the solar data gathered since Galileo first pointed a telescope at the Sun in 1612," NSF astronomical sciences director David Boboltz said in the statement.

READ MORE: The best picture ever taken of the sun reveals its bizarre surface [New Scientist]

More on the Sun: Scientists Mystified: Sun’s Magnetic Field Appears to be Flipping

Hole Shebang
Physicists Outline Plan to Harvest Energy From Black Holes
1. 13. 21
Read More
Satan's Butthole
The Sharpest-Ever Image of a Sunspot Looks Like a Portal to Hell
12. 4. 20
Read More
Tiny Flares
Scientists Found Something Surprising in Closest-Ever Photos of the Sun
7. 16. 20
Read More
+Social+Newsletter
TopicsAbout UsContact Us
Copyright ©, Camden Media Inc All Rights Reserved. See our User Agreement, Privacy Policy and Data Use Policy. The material on this site may not be reproduced, distributed, transmitted, cached or otherwise used, except with prior written permission of Futurism. Articles may contain affiliate links which enable us to share in the revenue of any purchases made.
Fonts by Typekit and Monotype.