This Star Appears to Have Survived a Supernova

The explosion yeeted it through the galaxy at more than half a million miles per hour. 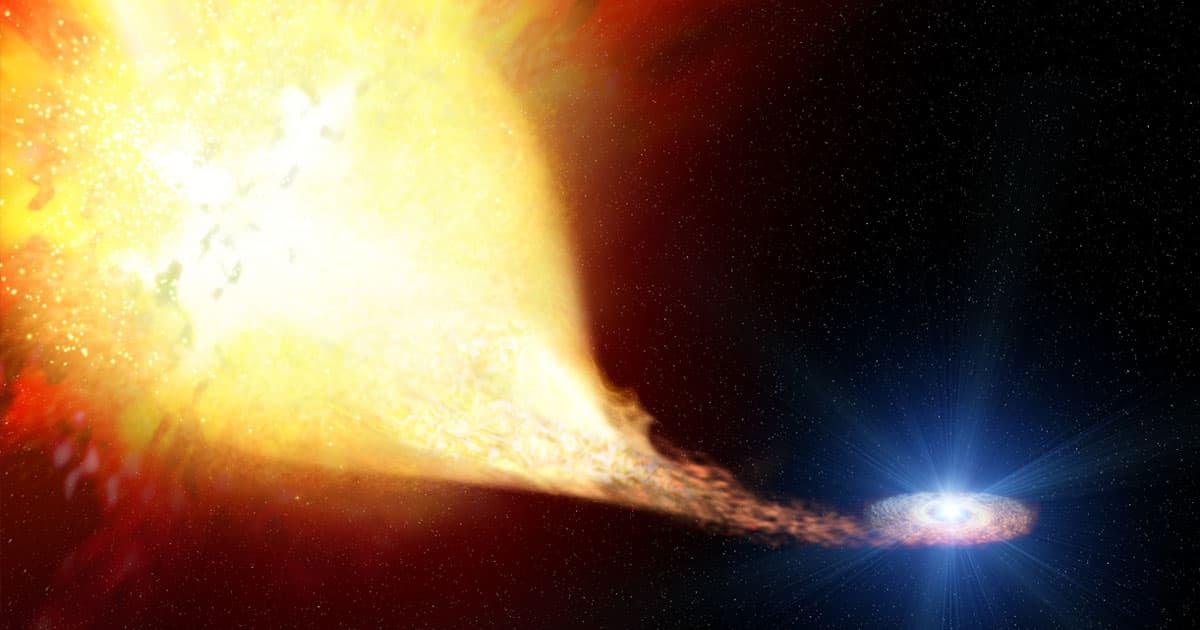 A white dwarf star was sent hurtling through the Milky Way at more than half a million miles per hour after experiencing a "partial supernova."

White dwarves are extremely dense, Earth-sized cores that are left over after a star has depleted all its fuel and shed its outer layers.

Astronomers believe the white dwarf in question, dubbed SDSS J1240+6710, was once part of a binary star system, the BBC reports. First discovered in 2015 some 1,430 light-years from Earth, astronomers detected a highly unusual mix of oxygen, neon, magnesium, and silicon in its atmosphere — not the layers of hydrogen and helium white dwarves usually are made up of.

Several years later, using data from NASA's Hubble Space Telescope, an international team of astronomers discovered that the bizarre white dwarf also had carbon, sodium, and aluminum in its atmosphere, the tell-tale signs of a supernova.

Making matters even more unusual, the scientists didn't find heavier elements including iron, nickel, chromium, and manganese, which usually are found after "Type Ia" supernova, which occur in binary systems where one of the stars is a white dwarf.

This led them to believe that the white dwarf only experienced — and survived — a "partial" supernova.

"That's what makes this white dwarf unique — it did undergo nuclear burning, but stopped before it got to iron," Gänsicke told Space.com.

"This star is unique because it has all the key features of a white dwarf but it has this very high velocity and unusual abundances that make no sense when combined with its low mass," Boris Gänsicke, physics professor at the University of Warwick, UK, and lead author of a paper about the research published the Monthly Notices of the Royal Astronomical Society, said in a statement.

"It would have been a type of supernova, but of a kind that that we haven't seen before," he added.

Here's what they think might have happened: Both stars in the suspected binary system were shot in opposite directions, like a cosmic slingshot, when the white dwarf suddenly shed a large portion of its mass.

Such an event would have resulted in a blip of light that would've been near impossible to detect from Earth.

"When it had its supernova event, it was likely just brief, maybe a couple of hours," Gänsicke told Space.com.

"We are now discovering that there are different types of white dwarf that survive supernovae under different conditions and using the compositions, masses and velocities that they have, we can figure out what type of supernova they have undergone," Gänsicke explained in the statement.

"There is clearly a whole zoo out there," he added. "Studying the survivors of supernovae in our Milky Way will help us to understand the myriads of supernovae that we see going off in other galaxies."

Read This Next
Strange Stars
Astronomers Puzzled by Extremely Peculiar Object in Deep Space
zombie star
Scientists Puzzled by Star That Exploded in Supernova But Somehow Survived
Sucking Atmospheres
Scientists Spot Ravenous "Vampire" Star Devouring Its Neighbor
Betelgeuse Betelgeuse Betelgeuse
Astronomers: This Star Isn't As Giant As We Thought, Just Closer
Fall Out Boy
Scientists: Earth Moving Through Radioactive Debris of Exploded Stars
More on Hard Science
Horrible Geese
Dec 4 on futurism
Furious Geese Are Defeating Humans, Scientists Find
Quacks Like a Duck
Dec 1 on futurism
Those Headlines About Scientists Building a Wormhole Are Total Nonsense, People
It From Bit
Nov 22 on the byte
A Scientist Is Crowdfunding an Experiment to Check if We Live in a Simulation
READ MORE STORIES ABOUT / Hard Science
Keep up.
Subscribe to our daily newsletter to keep in touch with the subjects shaping our future.
+Social+Newsletter
TopicsAbout UsContact Us
Copyright ©, Camden Media Inc All Rights Reserved. See our User Agreement, Privacy Policy and Data Use Policy. The material on this site may not be reproduced, distributed, transmitted, cached or otherwise used, except with prior written permission of Futurism. Articles may contain affiliate links which enable us to share in the revenue of any purchases made.
Fonts by Typekit and Monotype.