Someone Made a Perfume That Smells Like Outer Space

"We've all had Space Ice Cream...this takes it a step further." 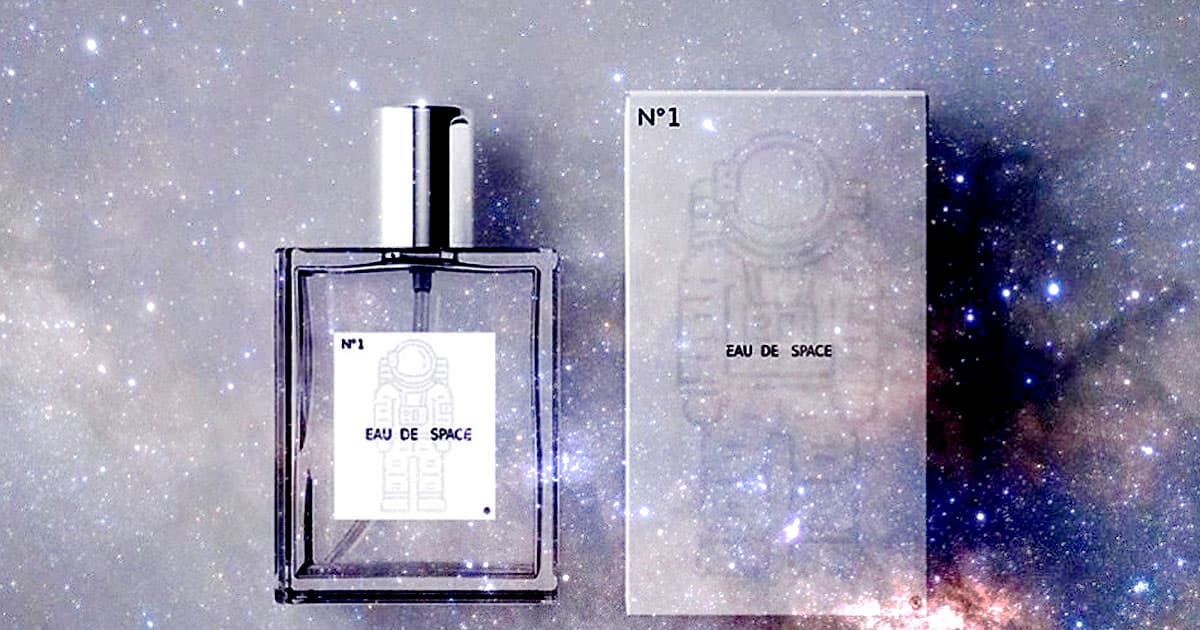 You'll never get a whiff of it directly — but astronauts have long said that space leaves a distinctive residual smell on their suits. Though it varies with the teller, some say it evokes gunpowder, burned meat, and even raspberries.

"At first I couldn't quite place it," former ISS science officer Don Pettit wrote in a 2002 NASA blog post. "It must have come from the air ducts that re-pressed the compartment. Then I noticed that this smell was on their suit, helmet, gloves, and tools. It was more pronounced on fabrics than on metal or plastic surfaces."

Now, that smell is coming down to Earth. Omega Ingredients, a UK-based natural flavors company for the food and beverages industry, has created a fragrance that it claims smells like space.

The company is hoping to bring the aptly named "Eau de Space" to market through a Kickstarter campaign, and has already smashed through its goal of $2,000 in funding.

Omega founder Steve Pearce was first contracted by NASA to recreate a fragrance that smells outer space back in 2008, CNN reports. He took four years to come up with the unique smell.

"NASA's goal of simulating Space during training is to eliminate any surprises Astronauts might experience in Outer Space," the Kickstarter description reads. "Practice makes perfect, and it is Rocket Science."

"We've all had Space Ice Cream... this takes it a step further," it boasts.

The smell of space is hard to pin down.

"The best description I can come up with is metallic; a rather pleasant sweet metallic sensation," Pettit wrote. "It reminded me of pleasant sweet smelling welding fumes. That is the smell of space."

Astronauts during NASA's Apollo missions also found that Moon dust seemed to have a similar smell, likening the odor to the smell of gunpowder.

"Space definitely has a smell that's different than anything else," Discovery pilot Dominic "Tony" Antonelli said after a spacewalk in March 2009, as quoted by Space.com. According to Antonelli, the smell lingered once the station's outer hatch was locked again after a spacewalk and the inner door was reopened.

The smell does seem to largely depend on the nose of the beholder. Over the decades, astronauts have also likened the smell to o-zone, sulfur, and even rum.

The surface of planets, on the other hand, could be far smellier than outer space. For instance, Mars' deadly mix of iron, sulfur, acids, and carbon dioxide would end up making it smell like rotten eggs — not exactly what you'd want to wear on a fancy night out.

If you were able to survive the trip, a deep whiff of Jupiter's lighter layers of gas could end up smelling like cleaning products and urine, since they're mostly made up of ammonia.

READ MORE: This is what space smells like [CNN]

Read This Next
Space Lumps
Scientists Say We May Be Extremely Wrong About the Universe
Into Darkness
Inside NASA's Bold Proposal to Probe the Mysteries of Dark Matter
Weed Science
Blaze It! Scientists Finally Discovered What Makes Weed Dank
Myanus, Hisanus, Heranus...
Here's What Uranus Scientists Think About Your Disgusting Jokes
Big Boom
Astronomers Spot Brightest Supernova Ever Observed
More on Hard Science
Horrible Geese
3:05 PM on futurism
Furious Geese Are Defeating Humans, Scientists Find
Quacks Like a Duck
Thursday on futurism
Those Headlines About Scientists Building a Wormhole Are Total Nonsense, People
It From Bit
Nov 22 on the byte
A Scientist Is Crowdfunding an Experiment to Check if We Live in a Simulation
READ MORE STORIES ABOUT / Hard Science
Keep up.
Subscribe to our daily newsletter to keep in touch with the subjects shaping our future.
+Social+Newsletter
TopicsAbout UsContact Us
Copyright ©, Camden Media Inc All Rights Reserved. See our User Agreement, Privacy Policy and Data Use Policy. The material on this site may not be reproduced, distributed, transmitted, cached or otherwise used, except with prior written permission of Futurism. Articles may contain affiliate links which enable us to share in the revenue of any purchases made.
Fonts by Typekit and Monotype.