Organism That Eats Meteorites Could Help Us Find Alien Life

It could help us identify the "fingerprints" of life on other planets. 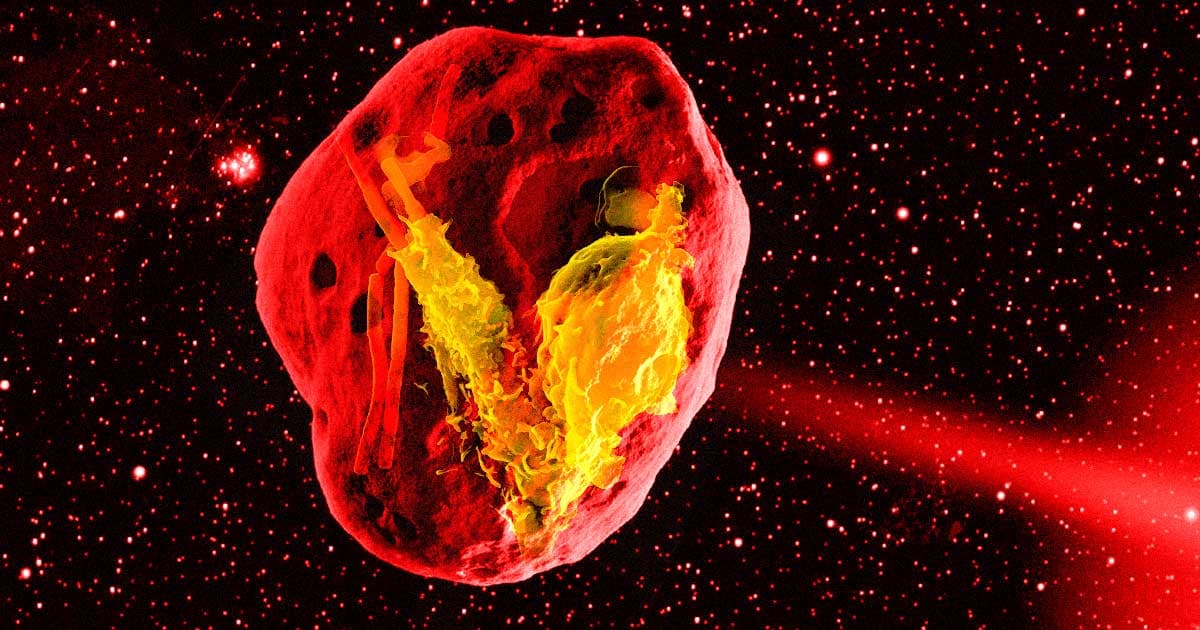 A microbial descendant of some of Earth's earliest life can not only survive by eating meteorites, but also seemingly thrive on the space rocks — a finding that could help us detect signs of past life throughout the universe.

Humans and all other animals need to eat organic matter to survive. The single-celled organism Metallosphaera sedula (M. sedula), however, can produce its energy by eating non-living things, such as metals — which allows it to thrive in some of the most hostile conditions on Earth, including inside volcanoes.

For a new study published on Monday in the journal Scientific Reports, a team led by scientists at the University of Vienna decided to see what would happen if they tried to feed M. sedula some of the meteorite Northwest Africa 1172, which was discovered in 2000.

To that end, they placed cells of the organism on sterilized slabs of the meteorite and fed other cells ground-up bits of it. A third group served as a control, with a diet of chalcopyrite, a copper-iron-sulphur mineral.

Surprisingly, the M. sedula gobbled up the meteorite even more readily than it did the terrestrial food, with its numbers growing far quicker on the former than the latter.

"We found that the reaction is quite happy," researcher Tetyana Milojevic told Motherboard. "Our students in the lab also immediately noticed the cells are very vivid, they're dancing on the space rock."

Using an electron microscope, Milojevic’s team was able to see which specific meteorite metals their bacteria ate and chemically transformed, even after the organisms had died — and the scientists believe this information could help in our hunt for extraterrestrial life.

"We performed this study to reveal microbial fingerprints — metal-containing microfossils — left on rocky extraterrestrial material," Milojevic told Gizmodo. "This should be helpful in tracing biosignatures for the search of life elsewhere in the Universe. If life ever occurred on another planet, similar microbial fingerprints could be still preserved in the geological record."

Read This Next
Soggy Past
NASA Spacecraft Finds Evidence of Ancient Rivers on Asteroid
Science is Hard
Extremely Dubious Scientist Believes There's Mushrooms and Lichen on Mars
Space Rocks
Materials Older Than the Solar System Found in Two Meteorites
Short List
Astronomers Just Drastically Narrowed the Search for Alien Life
New Lead
Harvard Scientists: Radiation From Black Holes May Create Life
More on Hard Science
Tractor Beam
Jan 26 on the byte
Scientists Build Working Tractor Beam, Although It's Comically Tiny
Having a Blast
Jan 18 on the byte
New Study Shows Where You Should Hide to Survive a Nuclear Attack
Offworld Amino
Jan 15 on the byte
Scientists Find Building Blocks of Life in Meteor That Smashed Into Family's Driveway
READ MORE STORIES ABOUT / Hard Science
Keep up.
Subscribe to our daily newsletter to keep in touch with the subjects shaping our future.
+Social+Newsletter
TopicsAbout UsContact Us
Copyright ©, Camden Media Inc All Rights Reserved. See our User Agreement, Privacy Policy and Data Use Policy. The material on this site may not be reproduced, distributed, transmitted, cached or otherwise used, except with prior written permission of Futurism. Articles may contain affiliate links which enable us to share in the revenue of any purchases made.
Fonts by Typekit and Monotype.