"My improvised, tent-like cubicle was comfortable, and my doctors and nurses were caring and watchful." 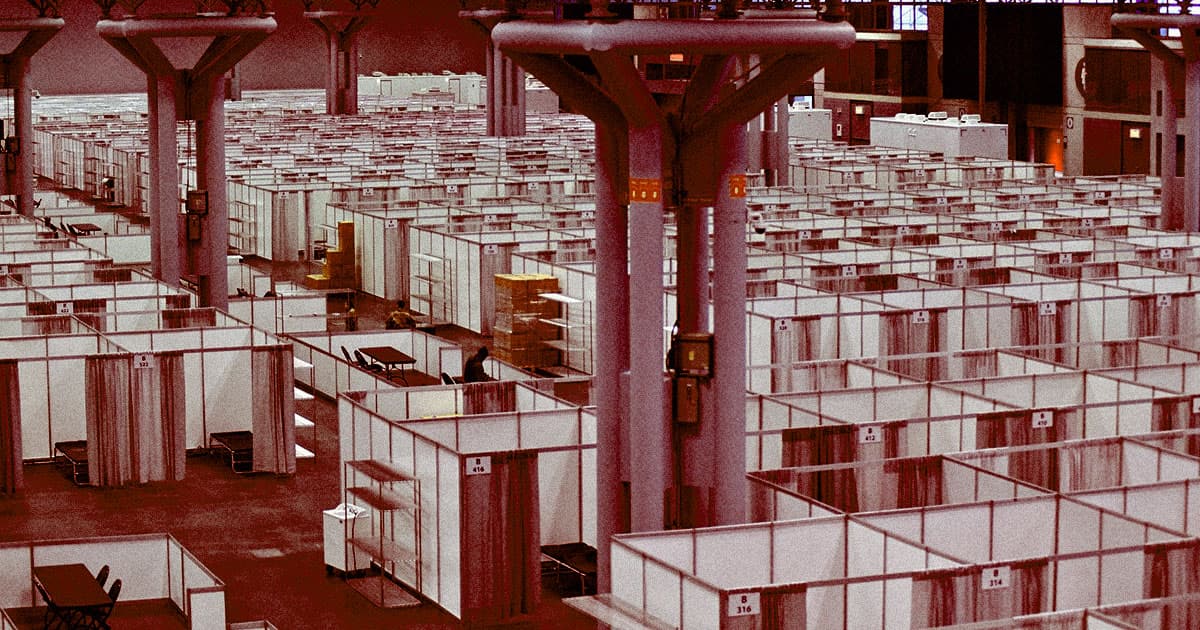 Image by The National Guard

In an as-told-to essay for Vox, an anonymous 70-year-old male coronavirus patient describes his stay at the Javits Center in New York City, a convention hall that the military transformed into a field hospital to treat COVID-19 patients in less than a week.

Without the coronavirus around, the hall would have been hosting the New York Auto Show. Instead, it’s a makeshift COVID ward.

And while the words “field hospital” don’t conjure up thoughts of a cozy night at the Ritz-Carlton, the man’s account doesn’t make it sound like a bad place to be — especially considering that we’re living through a devastating pandemic right now.

“I’d been sick for more than two weeks, and had known that I was positive for Covid-19 for several days, after getting the results of a test I took at my local, walk-in urgent care. At home, I’d spent most of my time lying in bed, with frustrating body aches, a fever, and an unrelenting loss of appetite.”

He quickly was put on supplemental oxygen, as well as a common antibiotic and hydroxychloroquine — the much discussed anti-malaria drug lauded by president Donald Trump.

His initial worries about being sent to a field hospital, rather than an actual hospital, were short-lived.

“But after being settled in at the Javits Center, my apprehension eased quickly. My improvised, tent-like cubicle was comfortable, and my doctors and nurses were caring and watchful. And, in a strange way, seeing that other New Yorkers were being treated in a hospital erected seemingly overnight gave me hope that Covid patients were being well-taken care of.”

His room — they reportedly come standard with a potted plant — was a lot cozier than he expected.

“In a way, my cubicle felt like a hospital room. But when you lie down on your back, you remember that you are — in fact — in a convention center, staring up to sky-high ceilings of steel.”

While he may have seen plenty of other New Yorkers around, the reality is that many hospital beds remain empty at the Javits Center field hospital.

At first, the Javits Center and the USNS Comfort — a 1,000 bed Navy hospital ship USNS Comfort that started taking patients earlier this month — were meant to house excess hospital patients without the coronavirus. Officials quickly changed their minds however, and started sending COVID-19 patients to both.

Thanks to the help of over 1,000 staff members, including officers from the National Guard, the conventional hall now has its own pharmacy, a concession stand, and nursing station — all built from scratch.

In a crisis, things could look a lot worse.

“You know, I’d say it’s better not to get [COVID] in the first place, and I understand why someone would be anxious about coming here,” the man wrote in his essay for Vox. “But when I looked around, everything seemed to be in order. And I think they all did a fine job.”

READ MORE: I was sent to be treated for Covid-19 at the Javits Center. Here’s what it’s like. [Vox]

More on the pandemic: Scientists: Some Social Distancing May Need to Last Until 2022

Read This Next
R-E-S-P-E-C-T
Here’s Why People Are Calling Elon Musk a “Space Karen”
Cozy Bears
State-Backed Russian Hackers Are Targeting Coronavirus Vaccine Research
Redrum
Murders Have Spiked in Major US Cities Since the Pandemic
Bending Over Backwards
Facebook Workers “Walk Out” Over Inaction on Trump Posts
Futurism
Amazon VP Quits Over “Chickenshit” Firing of Whistleblowers
More on Future Society
Accepting Doge
Yesterday on the byte
Elon Musk Hints Tesla Might Soon Accept Dogecoin
Peace!
Monday on the byte
Melinda Gates Met With Divorce Lawyers Around the Time of Epstein’s Arrest
Laughing Matters
May 9 on the byte
Elon Musk Jokes About Mars Colonists Dying Horribly
READ MORE STORIES ABOUT / Future Society
Keep up.
Subscribe to our daily newsletter to keep in touch with the subjects shaping our future.