The Latest Idea to Make People Actually Buy NFTs: Throw in a House 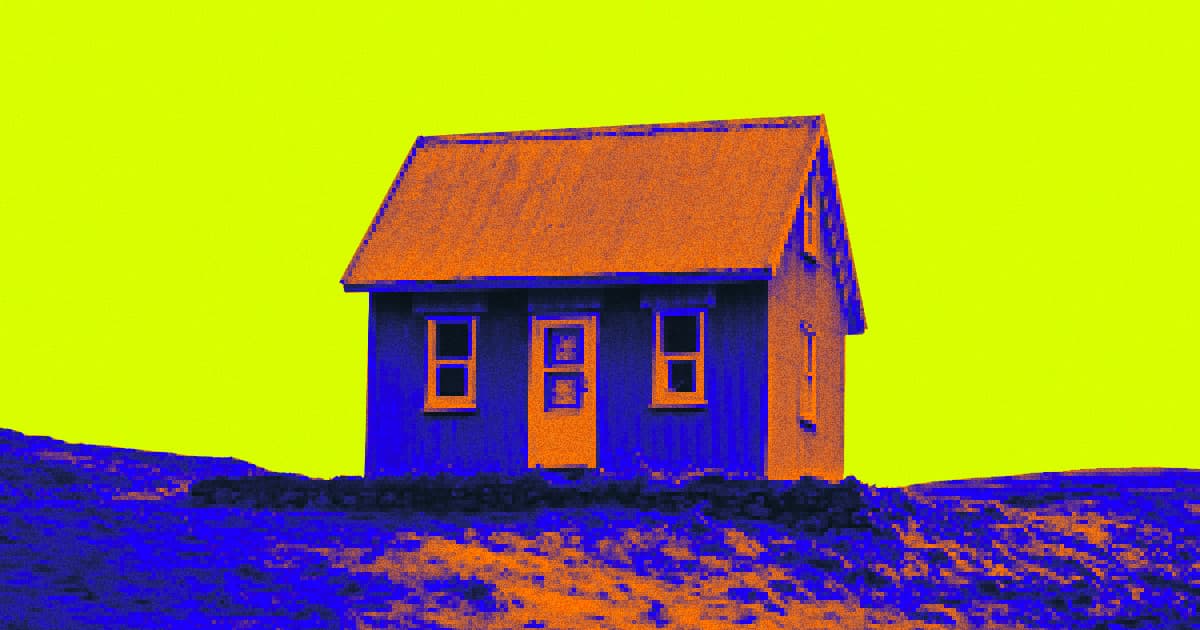 Like the rest of the cryptosphere, NFTs have had a tumultuous year. Back in January, the world's largest NFT trading platform by volume, OpenSea, saw a record-setting monthly sales volume of about $5 billion. But by September, it was only trading about $329 million worth of the digital assets per month, a fall that led to deep layoffs. Even the Jimmy Fallon-beloved clout monsters that are Bored Ape Yacht Club (BAYC) tokens watched their price floors dwindle to a fraction of their former value.

All that's to say that the NFT market has reached a point of reckoning, and for good reason. The get-rich-quick promise of digital assets has lost its luster against the backdrop of the broader crypto industry crash, which seems to have revealed how very little tangible, enduring worth these assets actually have without the mega-hype that once fueled them.

Still, NFTs aren't totally dead just yet. And to keep them alive, a growing number of web3 operators are turning towards a more familiar market: housing.

Importantly, the NFT makers in question aren't just selling expensive JPEGs of digital homes. Rather, these new ventures are listing real properties, and offering potential investors the chance to purchase those properties by way of NFTs. Thus the digital tokens aren’t exactly assets, more like mules. Or paperwork. Or both, as the digital tokens are allegedly embedded with all of the inspections and deeds and the rest of the house-buying paper trail.

Essentially, advocates say, it's the click-add-to-cart-ification of home buying. And on the NFT maker's side, it intertwines blockchain assets — which, post-crash, are of more dubious value than ever — with real estate, a much more tangible investment.

"When [the investor makes] the purchase decision, then it becomes that simple," Sanjay Raghavan, Head of web3 Initiatives at Roofstock onChain, the web3 subsidiary of web2 rental property investment platform Roofstock, told Futurism. "One click transaction."

Earlier this month, Roofstock announced its first sale: a "rent-ready" single family home in South Carolina, which went to a seasoned property investor for a cool $175,000 worth of the popular stablecoin USDC. But this wasn't the first sale of its kind. Back in February, a similar startup called Propy similarly auctioned off a Florida home via NFT for $653,000 of Ether.

"The only bureaucratic process that we had during the auction," Propy founder and CEO Natalia Karayaneva told Fortune at the time of the sale, alluding to the same alleged ease, efficiency, and reduced institutional involvement that Roofstock promises its own customers, "was a five-minute process of going through the KYC verification where the bidders had to provide their names and their ID and connect their wallet."

Interestingly, both those sales relied on first transferring home ownership to an LLC; the house-owning LLC is actually what's granted during the NFT exchange.

At first glance, cutting out steps in the path to buying a home is admittedly enticing. Buying a house is a long, drawn-out process, and a bunch of money ultimately ends up going to the process itself, not just to the value of the house. That said, that process is long and complicated for a reason, and seasoned property investors like the ones that Roofstock's marketing to are the folks who probably already know how to navigate that process quite well.

And to that point, not all experts are totally convinced that this evolution is really all that necessary.

"I find this particular line of development fascinatingly irrelevant to the real problems we face today: perhaps we can house the homeless in the Metaverse while we are at it?" Michael Every, a global strategist at Rabobank, told Futurism. "That seems to be the unicorn direction of travel!"

Cybersecurity is certainly of concern here, too. After all, if your home ownership is all embedded in an NFT, someone could theoretically just hack you and steal it; for its part, Roofstock assured Futurism that it has digital safeguards in place against hackers, while the inclusion of the LLC makes for the addition of an off-blockchain paper trail for proof-of-ownership. (Of course, everyone in blockchain says that, and they're constantly getting hacked.)

Of course, it could be argued that neither Roofstock nor Propy are really NFT creators, at least not in the traditional sense. Sure, the startups are using the tokens, but there's no worth — and therefore, they say, no cost — built into them. The asset is the house alone. But on that note, we have seen one home hawker incorporate NFTs into a home sale.

"It's not only a $7 million house, but I mean, you bought virtual real estate," Jorge Guinovart, the real estate developer and crypto enthusiast behind a project called Reflection Manor, told Futurism last month. Eager to combine the very real houses he builds with the cryptoverse, Guinovart listed Reflection Manor — a real-life $7.7 million dollar mansion in Miami — with a few digital pot-sweeteners: a swanky virtual home in the still-not-even-in-beta "metaverse" of Alpha City, plus an NFT copy of the house.

And is either that "land" or that NFT worth anything? No. But according to Guinovart, one day, they could be.

"Two to three years from now, when alpha is fully open," he continued, "you have virtual property that could be worth one million, two million dollars as well."

A few days after Roofstock announced its first sale, a real estate investment firm in the Bahamas announced a similar blockchain venture: turning a 60-acre chunk of the Fyre Fest island into a "100 percent tokenized" luxury resort community for the crypto elite. Like Roofstock, the venture claims that every one of the 60 multimillion properties to be built on the island will be sold by hitting purchase on an NFT.

Which again, might be appealing to some — especially those wanting quick and easy access to offshore bank accounts. But according to Every, it looks more like "a good way to launder money" and "switch useless crypto and NFTs for the real world assets they are supposed to replace."

Every has a serious point. Even if most of these properties are sold in good faith — to seasoned landlords with enough crypto in their digital pocket to fill their blockchain shopping cart with as many houses as they can, that is — there's still a lot of room for misuse.

In any case, it's likely that this trend will continue, as it almost certainly confirms one thing: that NFTs can't subsist on hype alone. And to that point, while Roofstock and Propy have found a new use case for them, NFTs weren't made to be payment platforms. They were made to be assets, and their apparent demotion to blockchain point-of-sale system or even just currently-worthless pot-sweeteners isn't a great look for an industry attempting to architect an ever-more digital version of the future — especially when the assets that these NFTs are being used to trade are wholly real.

More on blockchain housing: Developers Are Transforming the Fyre Fest Island into an Exclusive Colony for Crypto Millionaires, Because of Course They Are

Read This Next
FTuxxed
Behind the Lawsuit Against Celebs Who Shilled FTX Before Its Spectacular Meltdown
Toes in the Water
Guy Linked to Huge Crypto Meltdown Says It’s Just a Coincidence That He’s Hanging Out in a Country With No Extradition to United States
Guest List
Celebrities Are Officially Being Sued by FTX Retail Investors
Tumblr or Bust
This Strongly Appears To Be Alameda CEO Caroline Ellison's Tumblr Account
Subway Menace
Tom Brady Appears to Be Totally Screwed by the FTX Collapse
More on Blocknik
Another One
Nov 23 on the byte
Coinbase May Be in Real Serious Trouble Now
Laundry Day
Nov 23 on the byte
Someone's Converting Millions of the Stolen FTX Funds Into Bitcoin
Tweeter's Brain
Nov 21 on the byte
Sam Bankman-Fried's Lawyers Quit Because of His "Incessant and Disruptive Tweeting"
READ MORE STORIES ABOUT / Blocknik
Keep up.
Subscribe to our daily newsletter to keep in touch with the subjects shaping our future.
+Social+Newsletter
TopicsAbout UsContact Us
Copyright ©, Camden Media Inc All Rights Reserved. See our User Agreement, Privacy Policy and Data Use Policy. The material on this site may not be reproduced, distributed, transmitted, cached or otherwise used, except with prior written permission of Futurism. Articles may contain affiliate links which enable us to share in the revenue of any purchases made.
Fonts by Typekit and Monotype.