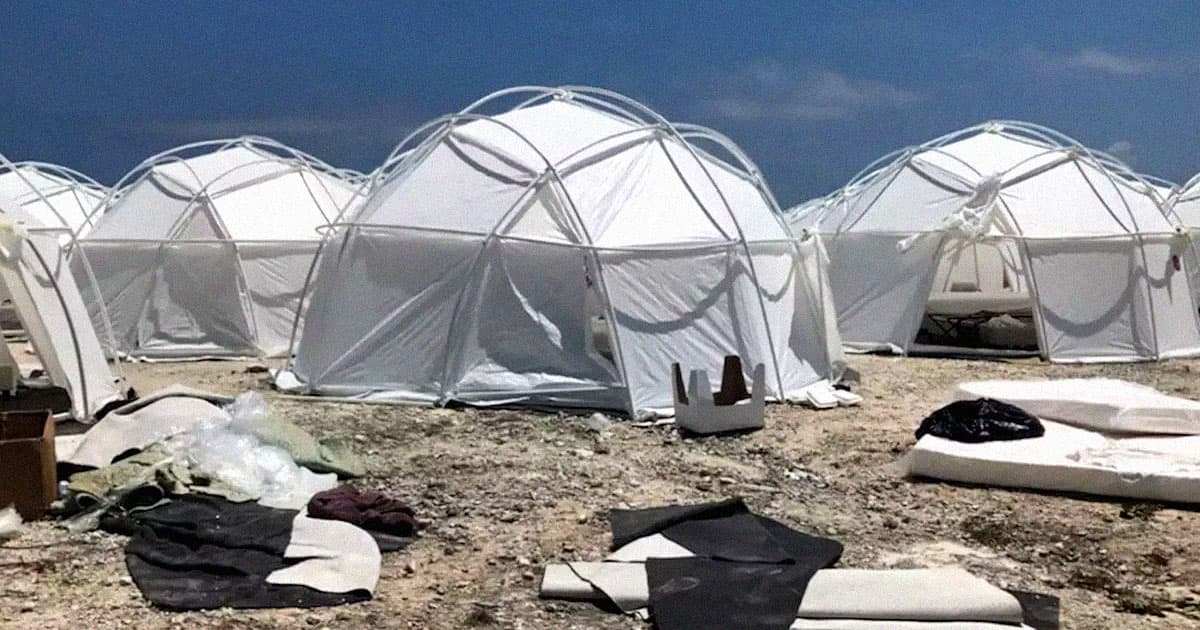 Developers are Transforming the Fyre Fest Island Into an Exclusive Colony for Crypto Millionaires, Because of Course They Are

"We bought this property because we see its future, not its past."

"We bought this property because we see its future, not its past."

The Fyre Fest island — yup, the Bahamas locale where convicted felon Billy McFarland "hosted" the wretched music festival that never was in 2017 — has reached its natural next form: a luxury real estate colony for the crypto elite, where "60 ultra-luxe pavilions and villas" will be bought and sold exclusively by way of NFTs.

That's right. A developing group called AGIA International claims to have snagged a 60-acre slice of cursed paradise and plans to sell multimillion dollar homes via crypto wallet. Intrigued? If you want to get on the ground floor, the developers will let you on an "allowlist" for a cool $10,000. Sounds... safe.

"This is the first time an entire real estate development has been exclusively for sale on the blockchain," Matthew Salnick, AGIA's blockchain developer, said in a statement. "There's never been a 100 percent tokenized resort-style community."

Shockingly, there's a not a lot of transparency regarding how the process actually works.

While buying an NFT might sound simple enough, buying and owning deeded, real-world properties is a lot more complicated than scooping up an expensive JPEG. And though the developers do make the vague claim that their system offers "easily traceable ownership" and "faster buying-selling across borders," NFT trading is notoriously rife with scams and hacks — what happens if someone hacks into your wallet and, uh, steals your luxe villa?

That being said, shadiness — and, to that point, offshore banking — seems to be part of the whole pitch, with developing partner and Unchained Partners CEO Hunter Williams claiming that "among other benefits," perspective buyers will have access to "Bahamian residency and access to its sophisticated offshore banking system."

On that note, it's not terribly surprising to see the first so-called community of this kind being built in the Bahamas. Earlier this year, the country's PM, Philip E. Davis, gave any and all crypto operations the green light to set up shop.

"If the world of cryptocurrency is where you see your possibilities," Davis said back in April," then the Bahamas has a place for you."

Are there a lot of details missing here? Sure. Could this be Fyre Fest times actual millions? Definitely. But hey, according to AGIA, they just saw an opportunity. After all, one man's trash is another's offshore treasure.

"We bought this property because we saw its future," Erik Sanderson, an AGIA International co-founder, said in a statement, "not its past."

READ MORE: Fyre Festival's Island Is Being Turned Into an Enclave for Crypto Millionaires

More on NFT houses: This $7.7 Million Miami Mansion Comes With a Metaverse "Twin"