"Our measurements refute all EmDrive claims by at least 3 orders of magnitude." 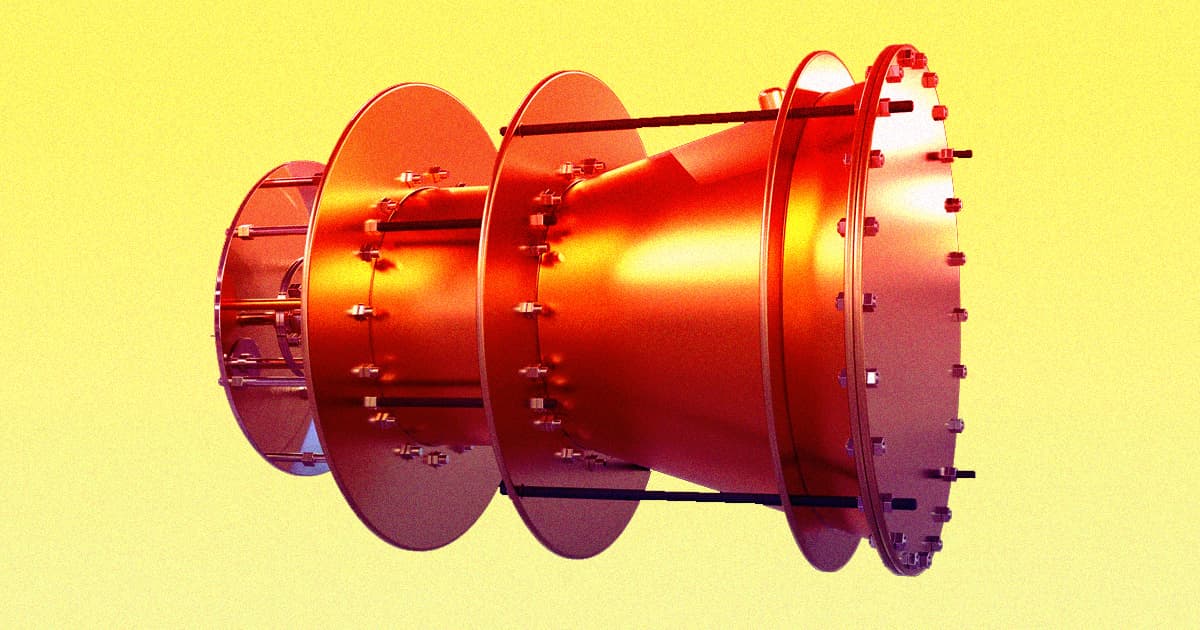 A team of German researchers have found that a highly controversial spacecraft thruster prototype called the EmDrive may not produce any thrust at all, Popular Mechanics reports.

Scientists have debated for decades whether the EmDrive thruster is a viable solution to propel a spacecraft without the need for propellant.

The idea sounds too good to be true. The EmDrive purportedly works by pumping microwaves into a conical chamber, which then bounce around and collide with the cone's walls, exerting tiny amounts of force, which, when accumulated, provide enough force to propel the spacecraft.

Such a thruster would revolutionize deep space travel, bypassing conventional limitations of physics and cutting travel times to other star systems considerably.

The problem, of course, is that the EmDrive would defy Newton's Second Law, which states that the acceleration of an object directly relates to the net force applied, and occurs in the same direction as that force.

That's why the idea has met plenty of skepticism over the years, with many scientists calling the entire concept into question.

In their recent test, the researchers from Dresden University only found "sobering final reports on the results of intensive tests and analyzes of three EmDrive variants," according to a statement.

In a series of papers, a team led by Martin Tajmar, physicist and professor at the Dresden University of Technology, found that the EmDrive didn't appear to produce any thrust at all.

The possible thrust observed by previous teams of researchers — most notably by NASA's Eagleworks, a lab that built an EmDrive prototype in 2016 — was likely caused by something far more mundane.

"We found out that the cause of the ‘thrust’ was a thermal effect," Tajmar said in the statement. He and his team used the configuration built by NASA's Eagleworks laboratories to get to their results.

"When power flows into the EmDrive, the engine warms up," he explained. "This also causes the fastening elements on the scale to warp, causing the scale to move to a new zero point. We were able to prevent that in an improved structure."

The new results are a damning indictment of previous claims made about the controversial thruster. "Our measurements refute all EmDrive claims by at least three orders of magnitude," Tajmar concluded.

It's unclear if the concept of the EmDrive will live on — but at same time, the sobering results shouldn't stop us from trying to find an alternative to fuel intensive spacecraft engines, at least if we ever want the chance of exploring beyond the Earth's immediate celestial locale.

Read This Next
Into Darkness
Inside NASA's Bold Proposal to Probe the Mysteries of Dark Matter
Martian Ammonia
NASA Rover Detects Organic Molecules on the Surface of Mars
Myanus, Hisanus, Heranus...
Here's What Uranus Scientists Think About Your Disgusting Jokes
Joseph Strikes Again
Experts Shred Paper Claiming to Identify Mushrooms on Mars
Mars Shrooms
Extremely Dubious Research Claims to Spot Fungus Growing on Mars
More on Hard Science
Horrible Geese
3:05 PM on futurism
Furious Geese Are Defeating Humans, Scientists Find
Quacks Like a Duck
Thursday on futurism
Those Headlines About Scientists Building a Wormhole Are Total Nonsense, People
It From Bit
Nov 22 on the byte
A Scientist Is Crowdfunding an Experiment to Check if We Live in a Simulation
READ MORE STORIES ABOUT / Hard Science
Keep up.
Subscribe to our daily newsletter to keep in touch with the subjects shaping our future.
+Social+Newsletter
TopicsAbout UsContact Us
Copyright ©, Camden Media Inc All Rights Reserved. See our User Agreement, Privacy Policy and Data Use Policy. The material on this site may not be reproduced, distributed, transmitted, cached or otherwise used, except with prior written permission of Futurism. Articles may contain affiliate links which enable us to share in the revenue of any purchases made.
Fonts by Typekit and Monotype.