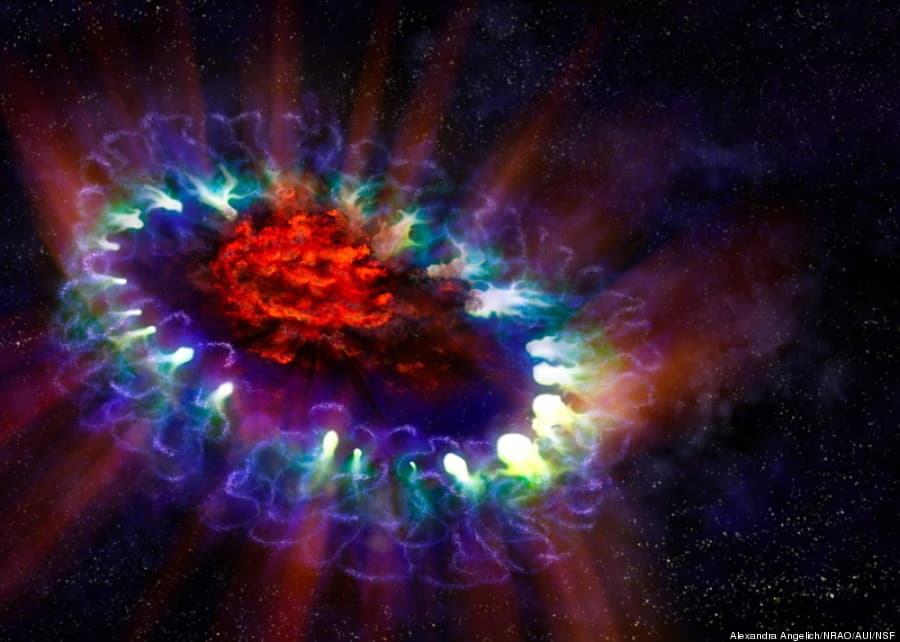 Tanks to a $9 million grant from the National Science Foundation and matching funds from the Zwicky Transient Facility (ZTF) collaboration, a new camera is being built at Caltech's Palomar Observatory that will be able to survey the entire Northern Hemisphere sky in a single night, searching for supernovas, black holes, near-Earth asteroids, and other objects. The digital camera will be mounted on the Samuel Oschin Telescope, a wide-field Schmidt telescope that began its first all-sky survey in 1949. That survey, done on glass plates, took nearly a decade to complete.

The ZTF camera's field of view will encompass 47 square degrees, larger than 200 full moons. By contrast, the field of view of the Hubble Space Telescope is so small that a mosaic of 130 of its images of the moon would be needed to see it in its entirety. "The Hubble Space Telescope and the big ground-based telescopes see really deep but have small fields of view," says astrophysicist Eric Bellm, a postdoctoral scholar at Caltech and ZTF's project scientist. With its field of view, ZTF will be able to identify supernovas less than 24 hours old every single night. This quick response is critical, as the light emitted in the first few hours after a supernova explodes contains a wealth of information that cannot be retrieved later.

"Discovery is only the first step," says Shrinivas Kulkarni, ZTF's principal investigator and Caltech's John D. and Catherine T. MacArthur Professor of Astronomy and Planetary Science. "When something unusual is found, we will rapidly respond with some of the world's most powerful telescopes," including the Palomar Observatory's 200-inch Hale.

In time, researchers hope, ZTF itself will be pointed at targets identified by the Laser Interferometer Gravitational-wave Observatory (LIGO), an NSF-funded project run by Caltech and MIT that is searching for gravitational waves. These ripples in the fabric of space and time are predicted to occur when neutron stars, black holes, or other massive objects collide. Currently, LIGO is offline undergoing a technical upgrade to Advanced LIGO, which is slated to begin operations in 2016. If and when Advanced LIGO registers a gravitational wave, it will command ZTF to scan the ribbon of sky from which the signal emanated, searching for any visible change that might mark the point of origin.

ZTF—the successor to the intermediate Palomar Transient Factory (iPTF) survey and its predecessor, the Palomar Transient Factory—is a fully automated wide-field survey that uses the Oschin telescope to collect data that are then sent to the Infrared Processing and Analysis Center (IPAC) on the Caltech campus. At IPAC, software developed for PTF looks for anything that has changed between frames. ZTF will shoot one frame per minute at 18 gigabits per frame—the rough equivalent of watching eight hours of high-definition movies on Netflix every 60 seconds.

"ZTF is really about celestial cinematography," says Mansi Kasliwal (PhD '11), currently a visiting associate in astronomy who will start as an assistant professor of astronomy at Caltech in September 2015. "Our new camera can make a movie of the entire sky. Moving solar-system bodies such as asteroids will just pop out at us, and we'll be able to study catastrophic explosive transients such as supernovas and stars being torn apart by black holes."

"Processing so many images in real time is a huge challenge," says IPAC's executive director, George Helou. "It takes imaginative programming and powerful computers." ZTF will visit every corner of the sky some 900 times over the course of its three-year observing program; IPAC will compile the data into atlases of variable stars, active galactic nuclei, and other astronomically interesting objects.

Part of the NSF grant will fund an annual summer institute, coordinated by Pomona College in Claremont, California, to train students from across the United States in the latest astronomy instrumentation skills, large sky surveys, and data-analysis software.

"These undergraduates will be controlling some of the largest telescopes in the world and getting a taste of the excitement of the scientific process," explains Bryan Penprase, a professor at Pomona College and a co-principal investigator on the project, and the organizer of the summer institute. "The technology is so advanced that discoveries will be common. In just one night, the ZTF can discover hundreds of new sources. It's an incredible thing for a student to be able to say, 'I discovered that thing in the sky that no one else has ever seen before.'"

The Zwicky Transient Facility is named in memory of Caltech astronomer Fritz Zwicky, who pioneered the use of wide-field Schmidt-type telescopes for sky surveys. Zwicky was the prime mover behind the Oschin's construction, using its survey plates to hunt for supernovas—a term that Zwicky and Walter Baade coined in 1931. Zwicky also predicted the existence of neutron stars, dark matter, and gravitational lensing.

Provided by California Institute of Technology.