The Biggest Shockwave Ever Created by Earth 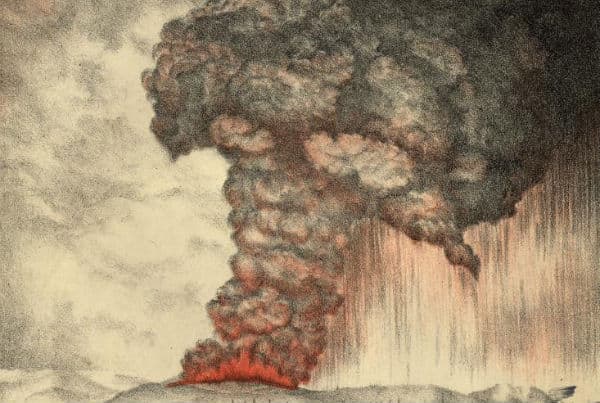 The loudest sound ever recorded in human history wasn't created by a human-made explosion, but instead it was created by the Earth itself. Creating a shockwave 100,000 times more powerful than a hydrogen bomb, this sound was clearly heard by 10 percent of the planet.

It was created by a volcano on the island of Krakatoa, one of the Indonesian islands. 64 km (40 mi) away, the British ship Norham Castle heard sounds so loud that it "shattered the eardrums" of half of the crew, and, given the violence of these explosions, the captain even remarked that "the Day of Judgement" has come. 3200 km (1988 mi) away, people living in Western Australia and New Guinea reported hearing sounds that "resembled those of artillery in a north-westerly direction." 4800 km (2982 mi) away, the residents of Rodrigues (an island in the Indean Ocean) reported hearing something that sounded like heavy gunfire in the distance.

The eruption itself threw smoke 80 km (50 mi) into the air, with ash falling up to 20 km (12 mi) away. Debris shot from the volcano during the initial explosion traveled at speeds of up to 2575 km/hr (1600 mi/hr) which is twice the speed of sound. Shockwaves from this eruption circled the globe several times. It created a tsunami with waves 45 m (148 ft) high that destroyed the shores of Java and Sumatra. Much further away, ships in the waters of South Africa were being rocked violently by a different set of tsunamis.  In general, this eruption is considered the greatest eruption of the 19th century.

To help give you an idea of the power that can be caused by volcanic eruptions, you can check out this video of a volcanic eruption in Papua New Guinea. It (fortunately) wasn't as violent as the Krakatoa eruption, but it's still pretty cool.