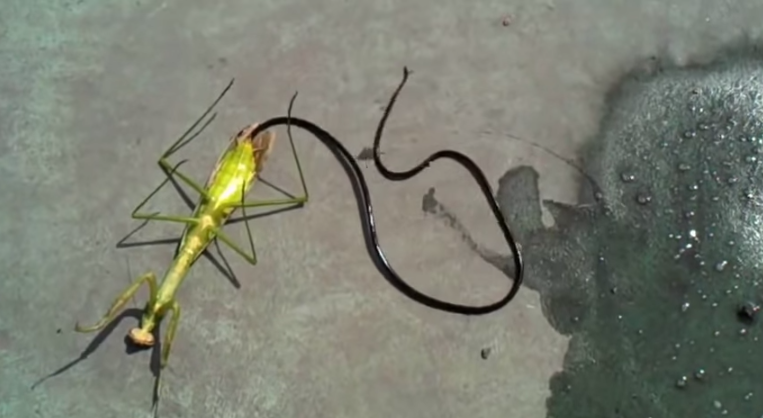 Imagine killing an insect, or any creature for that matter, and then seeing another organism— one that is three times as long as it— emerge from the corpse...alive and kicking (so to speak).

That's exactly what happened to one man. The video surfaced back in May of 2014. It shows an individual killing a praying mantis, and then we see an alarmingly large parasite emerge.

Do note, there is absolutely no reason to go around stomping on any praying mantis that you happen to come across. Indeed, we're not entirely sure why this gentleman did this, as the poor thing seemed to be minding its own business; however, it seems that the mantis didn't mind too much (what with already being dead and all). But in any case, do note:

The video is not for the faint of heart.

What you see is actually a horsehair worm, also known as Nematomorpha. And this little(?) guy is kind of horrifying, because these creatures don't just invade your body—they take over your brain as well.

Once this is done, and the worm is in control, it makes the praying mantis jump into water. This is, of course, fatal for the mantis; however, it is necessary for the parasite, as they need water to reproduce.

Amazingly, and unsettlingly, such worms can grow to two meters long.