It's tantalizing similar to the nucleobases of DNA and RNA — though, NASA took pains to point out, it's not necessarily a biosignature. 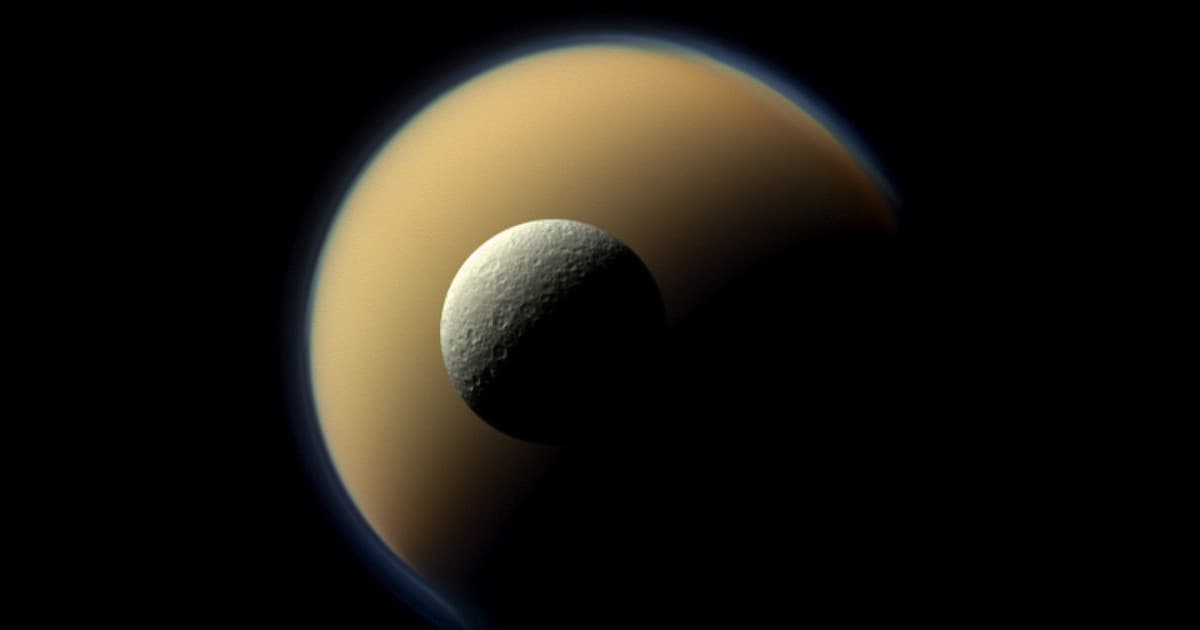 Using a massive radiotelescope in Chile, a team of NASA scientists say they've spotted a highly unusual molecule in the atmosphere of Titan, Saturn's largest moon.

The molecule in question is cyclopropenylidene, or C3H2. It's an exciting find because molecules similar to it form parts of the nucleobases of DNA and RNA, structures that carry the genetic code of life — though, the researchers were quick to point out, that doesn't necessarily mean the discovery is proof of life on Titan.

"When I realized I was looking at cyclopropenylidene, my first thought was, 'Well, this is really unexpected,'" research lead Conor Nixon, a planetary scientist at NASA’s Goddard Space Flight Center, said in a statement.

Previously, the rare molecule had only been spotted in clouds of gas between star systems, regions NASA says are too cold and empty for exciting chemical reactions to occur.

Titan's atmosphere, however, appears to be teeming with reactions, one of the many reasons NASA wants to study the world using a beefy octocopter drone called Dragonfly.

"Titan is unique in our solar system," Nixon said. "It has proved to be a treasure trove of new molecules."

Titan's atmosphere may resemble Earth's far more than other moons in our solar system — it even features rivers and lakes, as well as a subsurface ocean of salty water — but it's still a pretty inhospitable place for life as we know it. Its nitrogen-heavy atmosphere is four times as dense as Earth's, with gravity slightly less than the Earth's Moon.

That hasn't dissuaded scientists from investigating it for signs of life, especially considering that the atmosphere also contains a trace of methane, which can trigger a whole host of intriguing chemical reactions.

"We’re trying to figure out if Titan is habitable," Rosaly Lopes, senior research scientist at NASA’s Jet Propulsion Laboratory (JPL), who's an expert on the matter but wasn't involved in the research, said in the statement. "So we want to know what compounds from the atmosphere get to the surface, and then, whether that material can get through the ice crust to the ocean below, because we think the ocean is where the habitable conditions are."

There's still a lot to be learned about the mysterious moon's atmosphere. In fact, we have yet to figure out how C3H2 interacts with other gases in the atmosphere.

"We’ll be looking for bigger molecules than C3H2 [on Titan], but we need to know what’s happening in the atmosphere to understand the chemical reactions that lead complex organic molecules to form and rain down to the surface," said Melissa Trainer, a NASA Goddard astrobiologist, who was also not involved in the study.