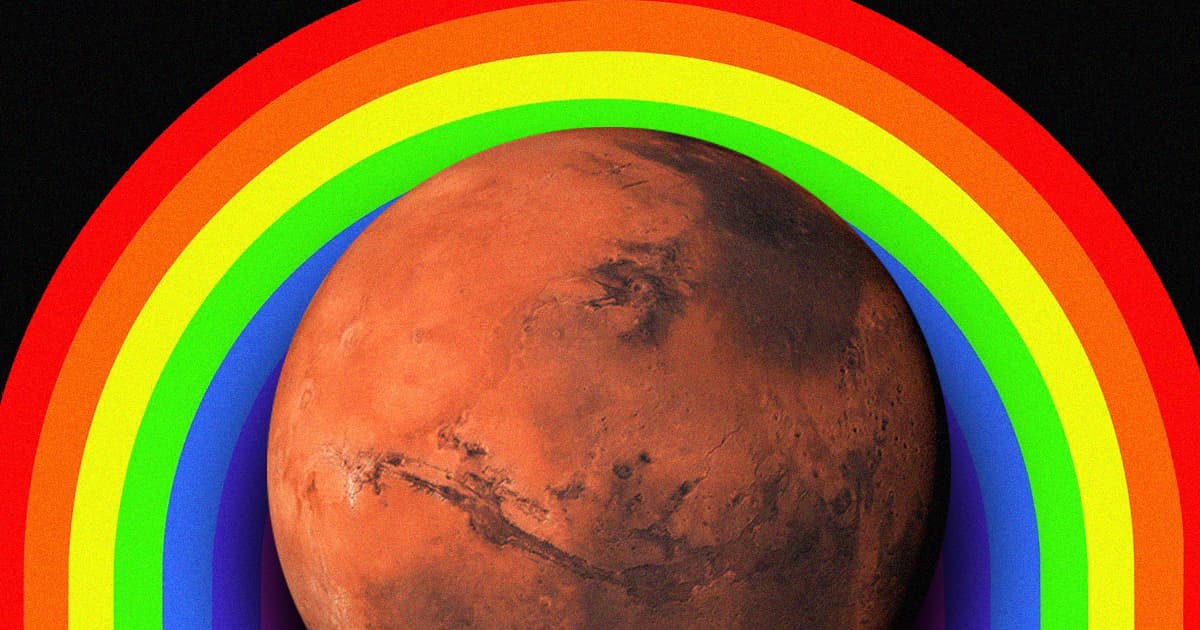 Update 4/6/2021: NASA got back to us with an explanation for the image — we've updated the post below, and you can also read our new story about the agency's explanation right here.

There shouldn't be any rainbows on Mars. To get rainbows on Earth, you need both sunlight and raindrops in the sky. The thin Martian atmosphere, however, is far dryer than Earth's, to say the least.

That's why a new image taken by NASA's Perseverance rover is particularly fascinating. The rover's Hazard Avoidance Camera picked up what appears to be a perfect rainbow above the Red Planet's arid surface.

Given the lack of rain in the Martian atmosphere, it's clearly not a rainbow — at least, that is, the way we experience them back on Earth.

So what was it? Armchair meteorologists online are suggesting that it may be a "dustbow," or reflections caused by dust instead of water droplets.

Another possibility is that the "bow" didn't actually ever appear in the sky, instead showing up as a refraction caused by lens elements of Perseverance's Hazcam.

In other words, the "rainbow" we see in the image may simply be the result of a "lens flare," an artifacts caused by stray rays of light entering the imaging mechanism and scattering inside the lens.

In this case, NASA said after we ran this story, the lens flare explanation appears to be correct. The agency tells us that the apparent rainbow is indeed an artifact caused by the Hazcam’s lens.

Rainbow-like artifacts on Mars may still be possible, though. A 2015 "Ask Me Anything" with NASA team members from the agency's Jet Propulsion Lab raises another possibility. In it, NASA Mars Program Office Chief Scientist Rich Zurek suggested that "icebows" could appear over the Martian horizon in a response to a question about the possibility of rainbows on Mars. These "icebows" were previously observed during NASA's Pathfinder mission in the late 1990s, according to the AMA. The spacecraft photographed several clouds above the Martian sky thought to be caused by ice particles.

Similar phenomena could show up on other planets as well. According to a BBC Science Focus blog post by radio astronomer Alastair Gunn, other planets including Saturn's moon Titan could feature "rainbows" as well. Titan has enough liquid methane droplets in its atmosphere to form rain — but a severe lack of direct sunlight would make such "methane bows" extremely unlikely, according to Gunn's analysis.

On Venus, droplets of sulfuric acid in the planet's atmosphere can cause "glories," a bull's-eye patterns as photographed by the European Space Agency's Venus Express in 2011.

Read This Next
What Lies Beneath
Researchers Say "Conan the Bacterium" Could Be Hidden Beneath Mars’ Surface
Into Darkness
Inside NASA's Bold Proposal to Probe the Mysteries of Dark Matter
Water Canyon
Scientists Spot Hidden Water in Mars' Grand Canyon
Martian Ammonia
NASA Rover Detects Organic Molecules on the Surface of Mars
Myanus, Hisanus, Heranus...
Here's What Uranus Scientists Think About Your Disgusting Jokes
More on Hard Science
It From Bit
Nov 22 on the byte
A Scientist Is Crowdfunding an Experiment to Check if We Live in a Simulation
Water Carrying
Nov 20 on the byte
Evidence Grows That Soggy Meteorites Gave Earth Its Oceans
Shroom News
Nov 20 on the byte
Scientists Build Circuit Boards Based on Mushrooms
READ MORE STORIES ABOUT / Hard Science
Keep up.
Subscribe to our daily newsletter to keep in touch with the subjects shaping our future.
+Social+Newsletter
TopicsAbout UsContact Us
Copyright ©, Camden Media Inc All Rights Reserved. See our User Agreement, Privacy Policy and Data Use Policy. The material on this site may not be reproduced, distributed, transmitted, cached or otherwise used, except with prior written permission of Futurism. Articles may contain affiliate links which enable us to share in the revenue of any purchases made.
Fonts by Typekit and Monotype.