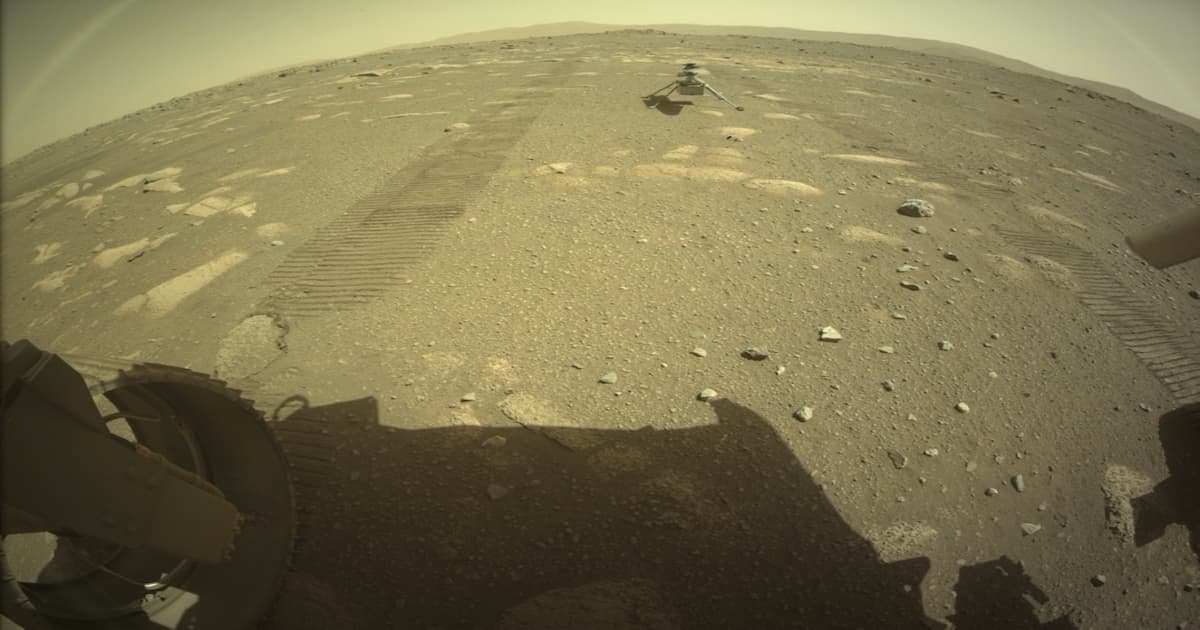 Prepare For Take Off

Now the helicopter must survive a few very cold nights on Mars by itself.

Now the helicopter must survive a few very cold nights on Mars by itself.

The Ingenuity helicopter has been dropped off on the surface of Mars by the Perseverance rover.

NASA’s Jet Propulsion Lab announced on Twitter that Ingenuity has successfully touched down on the Martian surface on Saturday, according to CNET. It was the culmination of nearly a week of deployment procedures — not to mention 293 million miles and about seven months of travel from Earth to Mars on the belly of the Perseverance rover.

#MarsHelicopter touchdown confirmed! Its 293 million mile (471 million km) journey aboard @NASAPersevere ended with the final drop of 4 inches (10 cm) from the rover's belly to the surface of Mars today. Next milestone? Survive the night. https://t.co/TNCdXWcKWE pic.twitter.com/XaBiSNebua

The tweet included a great shot of Ingenuity standing on its four legs on the rocky landscape where it will take off later this month:

Now Ingenuity has to brave through its first night "alone" on Mars.

Until it was dropped off, the helicopter relied on the Perseverance rover to keep its battery charged, and also used the rover’s thermostat-controlled heater to keep warm, according to NASA. Now that it’s disconnected, it’ll have to contend with Martian nights that can get as cold as -130 degrees Fahrenheit.

Luckily, Ingenuity has its own heater to keep warm along with a solar panel to charge its battery — but it'll still be a nerve-wracking waiting game for NASA engineers. "The Ingenuity team will be anxiously waiting to hear from the helicopter the next day," said Bob Balaram, chief engineer for the Mars Helicopter Project at JPL, in a status update.

Next Up: Taking Flight (Kind Of)

If all goes well (knock on wood), the Ingenuity team will continue to check on the helicopter’s temperature and battery performance over the next few days. After that, it’ll begin preliminary flight procedures.

"If it all looks good, then it’s onto the next steps: unlocking the rotor blades, and testing out all the motors and sensors," Balaram said in the status update.

The flight is scheduled for April 11, according to a tweet from JPL. As with all things space exploration related, though, that’s subject to change at any moment. Once it does happen, it’ll mark the first ever controlled flight through another planet’s air space.

More on Ingenuity: NASA Hid a Small Piece of the Wright Brothers’ Airplane in Its Mars Helicopter