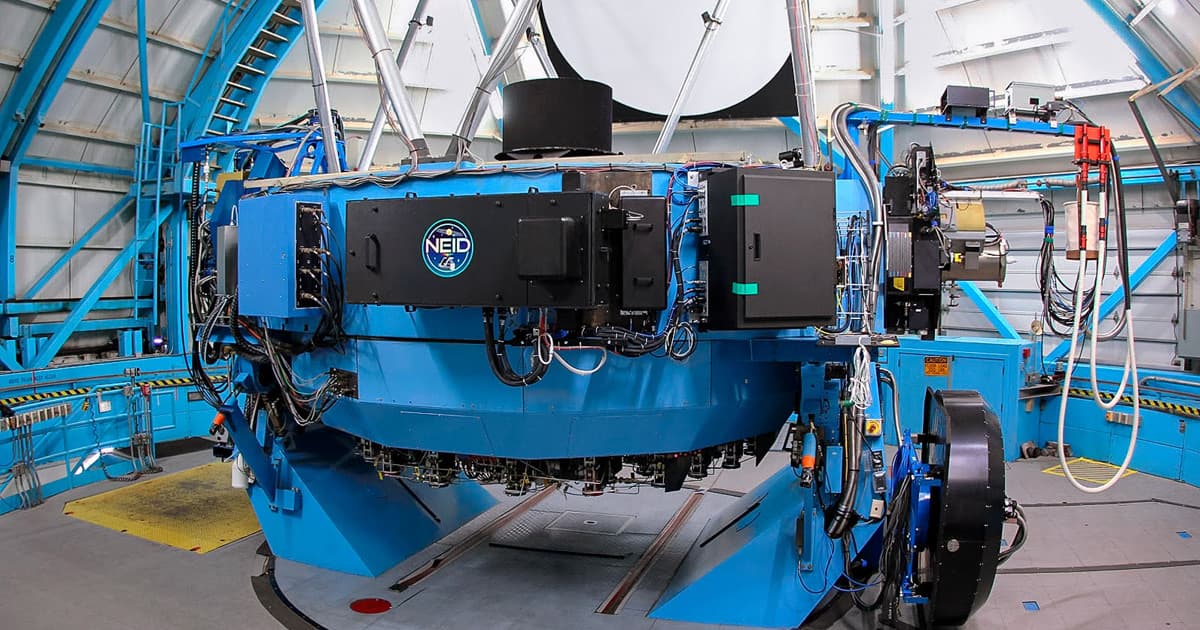 NASA has unveiled a new instrument that can weigh distant exoplanets with three times the sensitivity of any existing equipment.

The device, dubbed the NN-EXPLORE Exoplanet Investigations with Doppler spectroscopy (NEID), is located at the Kitt Peak National Observatory, according to Digital Trends, where it can take precise measurements of an exoplanet's mass — potentially assisting researchers with their hunt for other Earth-like worlds.

NEID doesn't measure mass directly. Rather, it tracks how much an exoplanet's gravitational force causes its host star to "wobble" while it orbits around.

A big wobble indicates that the exoplanet has a strong gravitational pull, which is directly correlated to having a large mass.

Because NEID is three times more sensitive than any other wobble-measuring instruments out there, according to Digital Trends, it stands to vastly improve our understanding of distant solar systems.

"When we combine future NEID observations with data from spacecraft, things will really get interesting, and we will be able to learn what planets are made of," NEID researcher Jason Wright said in a press release. "We will know the planet's density, which is a clue to understanding how much of an atmosphere the planet has; is it gaseous like Saturn, an ice giant like Neptune, rocky like Earth, or something in between — a super-Earth or sub-Neptune?"

More on space weights: A New Trick Lets Us Weigh The Galaxy. It’s The First Step Toward Figuring Out What It’s Made Of

Read This Next
Space Lumps
Scientists Say We May Be Extremely Wrong About the Universe
Into Darkness
Inside NASA's Bold Proposal to Probe the Mysteries of Dark Matter
Martian Ammonia
NASA Rover Detects Organic Molecules on the Surface of Mars
Myanus, Hisanus, Heranus...
Here's What Uranus Scientists Think About Your Disgusting Jokes
Joseph Strikes Again
Experts Shred Paper Claiming to Identify Mushrooms on Mars
More on Hard Science
Warped Tour
Thursday on futurism
Professor Believes Door to Warp Drive May Lie With Ethylene Glycol
Sky Bursts
Thursday on the byte
Astronomers Intrigued by 25 Mysterious Repeating Radio Signals From Deep Space
Tractor Beam
Jan 26 on the byte
Scientists Build Working Tractor Beam, Although It's Comically Tiny
READ MORE STORIES ABOUT / Hard Science
Keep up.
Subscribe to our daily newsletter to keep in touch with the subjects shaping our future.
+Social+Newsletter
TopicsAbout UsContact Us
Copyright ©, Camden Media Inc All Rights Reserved. See our User Agreement, Privacy Policy and Data Use Policy. The material on this site may not be reproduced, distributed, transmitted, cached or otherwise used, except with prior written permission of Futurism. Articles may contain affiliate links which enable us to share in the revenue of any purchases made.
Fonts by Typekit and Monotype.