NASA Imaged the Bubble Around the Solar System and... Yikes 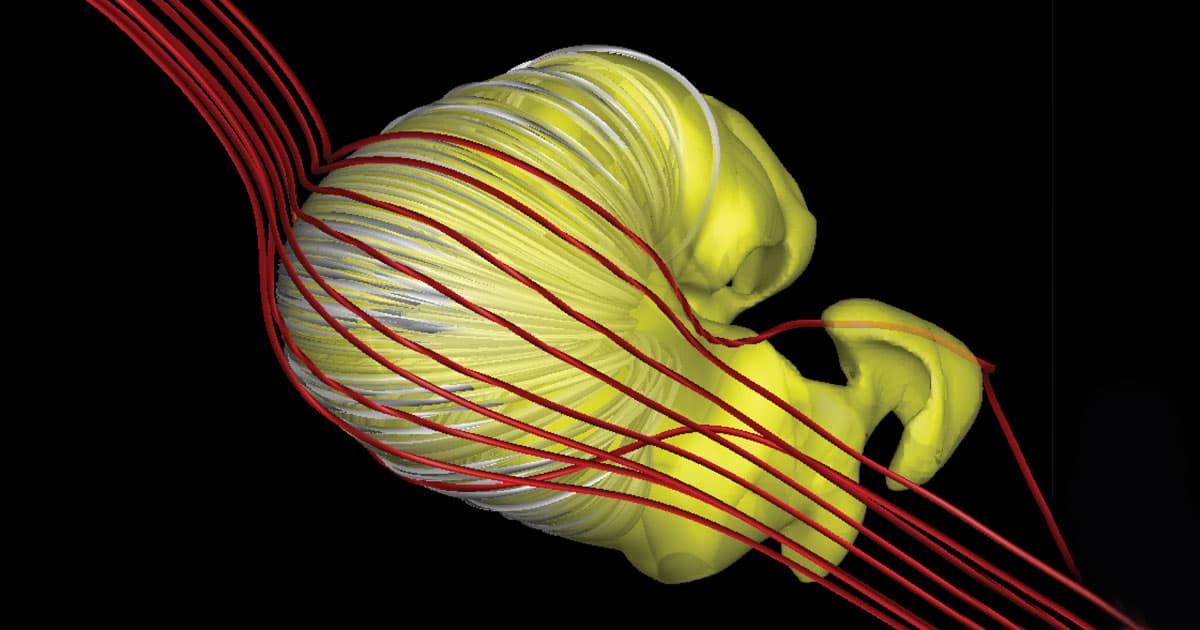 Only two manmade objects have traveled beyond the far edges of the solar system: NASA's Voyager 1 and Voyager 2.

Beyond the heliosphere, the bubble of space created by the Sun, lies the interstellar void of space between stellar systems in our galaxy.

For years, astronomers have suggested that the heliosphere is shaped like a comet, with a characteristically long tail that helps act like a shield that blocks incoming cosmic rays.

But according to new research, its shape could look far more peculiar than that: like a "deflated croissant," according to a NASA statement. Less comet and more like a chewed up piece of gum, or maybe something vaguely biological from the movie "Annihilation."

To construct the model, a team of astronomers took a closer look at data collected by NASA's Interstellar Boundary Explorer (IBEX). The mission analyzed energetic neutral atoms as cosmic rays travel from the Sun and outwards towards the heliopause, the theoretical boundary past which solar winds can't penetrate, some ten billion miles from Earth.

The team also considered data about charged particles being reflected towards the inner solar system, courtesy of NASA's Cassini mission, as well as measurements from NASA's New Horizons mission. Astronomers found that the further solar wind moved away from the Sun, it interacted with an increasing amount of material from interstellar space.

With all this data in hand, the team then got to work to come up with a 3D model of the heliosphere, as detailed in a paper published in the journal Nature Astronomy in March.

The result looks far more peculiar than the elegant comet-like shape from conventional models. Two jets shoot out of the center of this "croissant," caused by the solar magnetic field. The overall shape is far smaller, rounder, and narrower than the conventional model.

Knowing the shape of the heliosphere could prove to be helpful in figuring out whether other star systems could also be shielded by a similar bubble, and thereby harbor life. The heliosphere stops most galactic cosmic rays from penetrating through — the ones that get through can prove dangerous, particularly to astronauts.

Astronomers are hopeful that NASA's upcoming Interstellar Mapping and Acceleration Probe (IMAP) could shed more light on the actual shape of our solar system's heliosphere. The probe, slated for launch in 2024, will attempt to measure how energetic particles behave and interact with solar wind.

More on the heliosphere: It's Official: NASA Is Considering an Interstellar Mission

Read This Next
From the Dept. of Things to Buy
Review: The "Out of This World Cook Book" Chronicles the Early Meals of the Space Age
Overloaded
Whiny Space Tourists Say They Were Too Busy on the Space Station
The Moonian
Senior NASA Official Fears Getting "Stuck" on the Moon
Space Sick
Space Is Wreaking Havoc on Astronauts' Blood
Slip Sliding Away
NASA's Absurdly Expensive SLS Megarocket Is Broken Again
More on Sci-Fi Visions
Human v. Giraffe
Yesterday on the byte
Chaotic Italian Fashion Line Baffles Facial Recognition Software
Step One
Yesterday on the byte
World’s Third Richest Person Says He’s Developed "Addiction" to ChatGPT
Mouse Bot
Monday on the byte
Scientists Build Gruesome Robots That Move With Mouse Muscles
READ MORE STORIES ABOUT / Sci-Fi Visions
Keep up.
Subscribe to our daily newsletter to keep in touch with the subjects shaping our future.
+Social+Newsletter
TopicsAbout UsContact Us
Copyright ©, Camden Media Inc All Rights Reserved. See our User Agreement, Privacy Policy and Data Use Policy. The material on this site may not be reproduced, distributed, transmitted, cached or otherwise used, except with prior written permission of Futurism. Articles may contain affiliate links which enable us to share in the revenue of any purchases made.
Fonts by Typekit and Monotype.