This could be good news for the chances of life on Saturn's giant "snowball" moon. 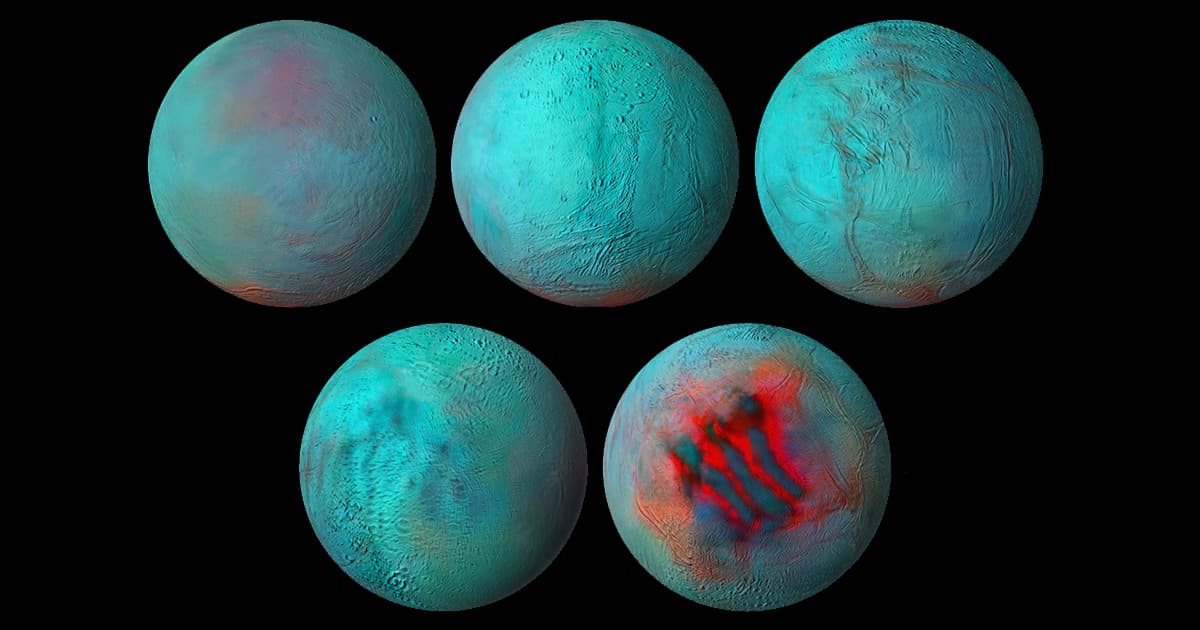 By digging through detailed infrared images of Saturn's icy moon Enceladus — courtesy of NASA's Cassini spacecraft, which met its demise back in 2017 after 13 years of Saturn exploration — NASA scientists say they've found "strong evidence" of fresh ice in the moon's northern hemisphere.

The ice, thought to have originated and resurfaced from Enceladus' interior, could be good news for the prospect of life on Enceladus, which is considered by many scientists to be one of the most promising places to look for life in the solar system.

The dataset, the most detailed global infrared views ever produced of the moon according to the agency, was created using data collected by Cassini's Visible and Infrared Mapping Spectrometer (VIMS). It includes scans of variable wavelengths, including visible light and infrared.

In 2005, scientists first made the discovery that Enceladus shoots giant plumes of ice grains and vapor from a suspected subsurface ocean hiding underneath a thick crust of ice.

The new infrared signals perfectly match the location of this activity, made highly visible in the form of neon red "tiger stripe" gashes on the moon's south pole.

Similar features have also been spotted in the northern hemisphere as well, leading scientists to believe that the same process is happening on both hemispheres.

"The infrared shows us that the surface of the south pole is young, which is not a surprise because we knew about the jets that blast icy material there," Gabriel Tobie, VIMS scientist at the University of Nantes, France and co-author of a new paper about the findings published in the journal Icarus, said in a NASA statement.

"Now, thanks to these infrared eyes, you can go back in time and say that one large region in the northern hemisphere appears also young and was probably active not that long ago, in geologic timelines," he added.

In October 2019, a team of researchers from the Free University of Berlin found traces of organic compounds in the moon's icy plumes that appear to be the building blocks of amino acids, the precursors of Earth-based lifeforms.

Read This Next
Into Darkness
Inside NASA's Bold Proposal to Probe the Mysteries of Dark Matter
Martian Ammonia
NASA Rover Detects Organic Molecules on the Surface of Mars
Myanus, Hisanus, Heranus...
Here's What Uranus Scientists Think About Your Disgusting Jokes
Joseph Strikes Again
Experts Shred Paper Claiming to Identify Mushrooms on Mars
Mars Shrooms
Extremely Dubious Research Claims to Spot Fungus Growing on Mars
More on Hard Science
Tell Us How You R...
Yesterday on the byte
Former Particle Physicist Absolutely Annihilates the Field of Particle Physics
Long Live
Sep 25 on futurism
Giving Baby Mice This Drug Makes Them Live 10 Percent Longer
One Person's Trash
Sep 16 on the byte
Scientists Absolutely Thrilled to Find 150 Million Year Old Vomit
READ MORE STORIES ABOUT / Hard Science
Keep up.
Subscribe to our daily newsletter to keep in touch with the subjects shaping our future.
+Social+Newsletter
TopicsAbout UsContact Us
Copyright ©, Camden Media Inc All Rights Reserved. See our User Agreement, Privacy Policy and Data Use Policy. The material on this site may not be reproduced, distributed, transmitted, cached or otherwise used, except with prior written permission of Futurism. Articles may contain affiliate links which enable us to share in the revenue of any purchases made.
Fonts by Typekit and Monotype.