NASA Employee Says SpaceX's Starship Is About to Change Everything

"It’s a continuing and dedicated attempt to achieve the 'Holy Grail' of rocketry." 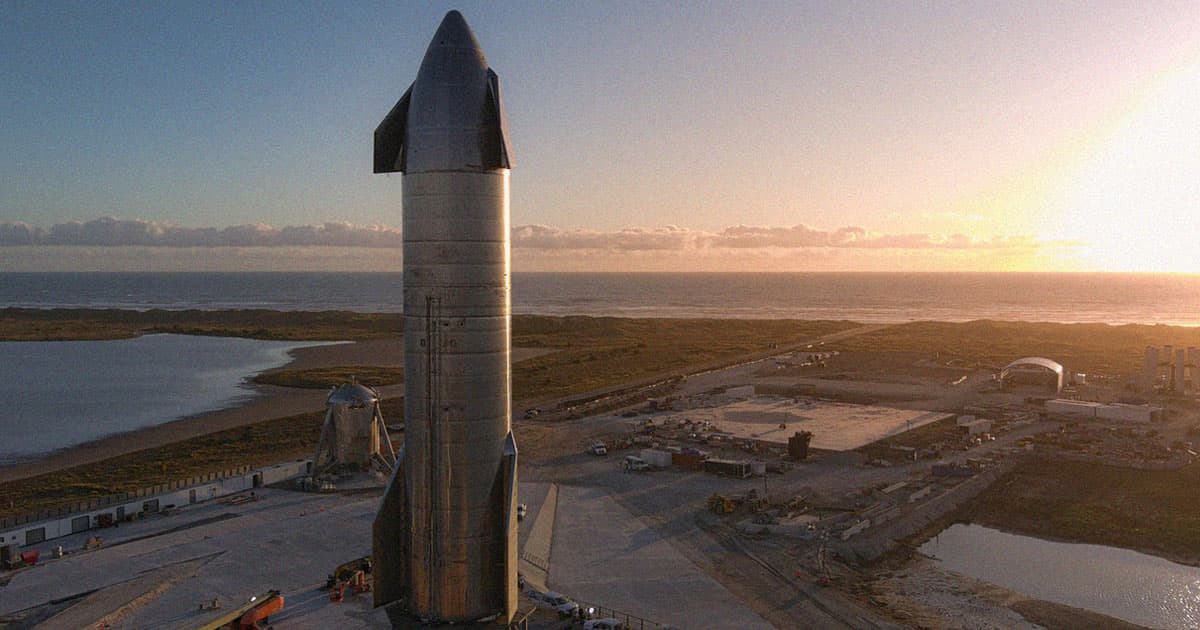 NASA Jet Propulsion Lab system architect Casey Handmer is impressed with SpaceX's progress toward developing a rocket capable of sending astronauts to the Moon and even Mars.

"Two years ago Starship was a design concept and a mock up," Handmer wrote in a lengthy post on his personal blog about the hyper-ambitious rocket. "Today it’s a 95 percent complete prototype that will soon fly to space and may even make it back in one piece."

SpaceX has indeed made significant strides, from launching early prototypes to an altitude of just over six miles to building a giant "Mechazilla" robot tower capable of catching Starships upon their return.

The spacecraft's first orbital test could occur as soon as next month, if regulatory approval doesn't end up dragging on.

"Starship matters," Handmer writes. "It’s not just a really big rocket, like any other rocket on steroids. It’s a continuing and dedicated attempt to achieve the 'Holy Grail' of rocketry, a fully and rapidly reusable orbital class rocket that can be mass manufactured."

He was also somewhat excoriating toward his employer, predicting that Starship is going to render many of the agency's grand ambitions moot.

"Artemis will continue to limp awkwardly on with occasional half-hearted press releases, Eric Berger scoops, and middling budgets," he wrote. "At some point Starship will demonstrate an automated Lunar landing and return with a few tonnes of Moon rocks and either NASA will have branding rights, or they won’t."

The NASA employee argues that Starship operates on a completely different level than any rocket coming before it.

"It is time to raise the scope of our ambition and think much bigger," Handmer argues.

For instance, he says, thanks to its tremendous capacity, a 1000-person base could be constructed on the surface of the Moon.

"We probably won't, but we could," Handmer writes.

He even goes on to argue that NASA's Artemis program, with the goal of returning astronauts to the lunar surface for the first time since the Apollo missions, isn't designed to fully take advantage of what Starship has to offer.

That's because "Starship is still not understood at the organizational level," Handmer argues.

NASA selected SpaceX as the sole winner of its Human Landing Systems program, awarding the Elon Musk-led company a $2.9 billion contract earlier this year that tasked the company with building a lunar variant of Starship.

The space agency is requiring Starship to deliver astronauts to the lunar surface and as soon as 2024 — but that's only scratching the surface of what the launch system can do.

"NASA is in the midst of the biggest opportunity since its founding in 1958," he concludes. "We could have every NASA center churning out world-building machines by the truckload, building critical infrastructure that forms the backbone of humanity’s leap to a multiplanetary civilization."

In all, Starship could represent a tectonic shift in space exploration to Handmer.

"It may take a year or three," he wrote, "but Starship will happen and it will change everything."

More on Starship: SpaceX Shares Spicy Video of Its Mars Rocket Being Tested

Read This Next
Putting Things In Perspective
Amazing Artemis Photo Shows Every Human, Alive or Dead, Plus the Moon
Fighting Words
Retired NASA Astronaut Scott Kelly Dishes on Ukraine, Russia, and Moon Mission
Psychological Warfare
Experts Excoriate NASA Report Claiming James Webb Wasn't Homophobic
Big Impact
Meteorite Hit Mars So Hard NASA Thought It Was a Quake
Failure to Launch
Lawsuit Accuses NASA of Widespread Racial Discrimination
More on Off World
TTFN
10:11 PM on the byte
Skkrt! NASA's Orion Heads Back to Earth, Leaves Moon in the Dust
Icy Comet Eruption
8:19 PM on the byte
Astronomers Spot Volcano Erupting on a Distant Comet
RUD-dy
6:23 PM on the byte
SpaceX Rocket Engine Explodes In a Green Blast
READ MORE STORIES ABOUT / Off World
Keep up.
Subscribe to our daily newsletter to keep in touch with the subjects shaping our future.
+Social+Newsletter
TopicsAbout UsContact Us
Copyright ©, Camden Media Inc All Rights Reserved. See our User Agreement, Privacy Policy and Data Use Policy. The material on this site may not be reproduced, distributed, transmitted, cached or otherwise used, except with prior written permission of Futurism. Articles may contain affiliate links which enable us to share in the revenue of any purchases made.
Fonts by Typekit and Monotype.