Events like these have never been observed on another world — until now. 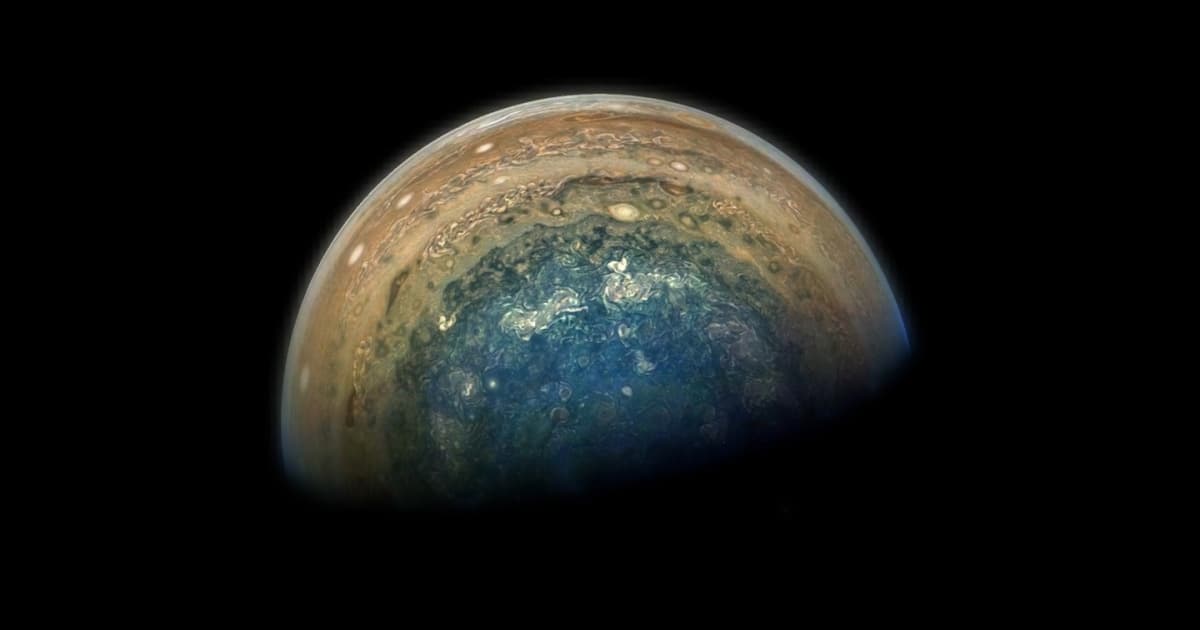 A team of NASA scientists has spotted strange flashes of light known as "transient luminous events" (TLEs) in the upper atmosphere of Jupiter.

Events like these have never been observed on another world until now — though here on Earth, scientists have observed similar flashes of light that occur far above lightning storms here on Earth, triggered by discharges of electricity in the upper atmosphere.

For a while, astronomers have theorized their existence in Jupiter's massive, turbulent atmosphere. Thanks to new data collected by the ultraviolet spectrograph instrument (UVS) attached to NASA's Juno spacecraft, a small space probe that's been orbiting the gas giant since 2016, the team was finally able to confirm their presence, as detailed in a new paper published in the Journal of Geophysical Research: Planets.

"UVS was designed to characterize Jupiter's beautiful northern and southern lights," Rohini Giles, Juno scientist and lead author, said in a statement. "But we discovered UVS images that not only showed Jovian aurora, but also a bright flash of UV light over in the corner where it wasn't supposed to be."

"The more our team looked into it, the more we realized Juno may have detected a TLE on Jupiter," he added.

The flashes resemble TLEs we experience on Earth in numerous ways. According to Giles, these events on Earth, including "sprites," which large-scale electrical charges occurring above thunderstorms, and "elves" (Emission of Light and Very Low Frequency perturbations due to Electromagnetic Pulse Sources), which are massive halos of light occurring around 100 km above thunderstorms, "appear reddish in color due to their interaction with nitrogen in the upper atmosphere."

On a different world, these rare events would look quite different. "But on Jupiter, the upper atmosphere mostly consists of hydrogen, so they would likely appear either blue or pink."

"Now that we know what we are looking for, it will be easier to find them at Jupiter and on other planets," Giles said. "And comparing sprites and elves from Jupiter with those here on Earth will help us better understand electrical activity in planetary atmospheres."

Read This Next
From the Dept. of Things to Buy
Review: The "Out of This World Cook Book" Chronicles the Early Meals of the Space Age
Overloaded
Whiny Space Tourists Say They Were Too Busy on the Space Station
The Moonian
Senior NASA Official Fears Getting "Stuck" on the Moon
Space Sick
Space Is Wreaking Havoc on Astronauts' Blood
Slip Sliding Away
NASA's Absurdly Expensive SLS Megarocket Is Broken Again
More on Sci-Fi Visions
From the Dept. of...
Yesterday on futurism
The Best Humidifiers of 2023
Human v. Giraffe
Jan 24 on the byte
Chaotic Italian Fashion Line Baffles Facial Recognition Software
Step One
Jan 24 on the byte
World’s Third Richest Person Says He’s Developed "Addiction" to ChatGPT
READ MORE STORIES ABOUT / Sci-Fi Visions
Keep up.
Subscribe to our daily newsletter to keep in touch with the subjects shaping our future.
+Social+Newsletter
TopicsAbout UsContact Us
Copyright ©, Camden Media Inc All Rights Reserved. See our User Agreement, Privacy Policy and Data Use Policy. The material on this site may not be reproduced, distributed, transmitted, cached or otherwise used, except with prior written permission of Futurism. Articles may contain affiliate links which enable us to share in the revenue of any purchases made.
Fonts by Typekit and Monotype.