Martian Meteorite, NWA 7034, May Give Insight Into Mars' Crust 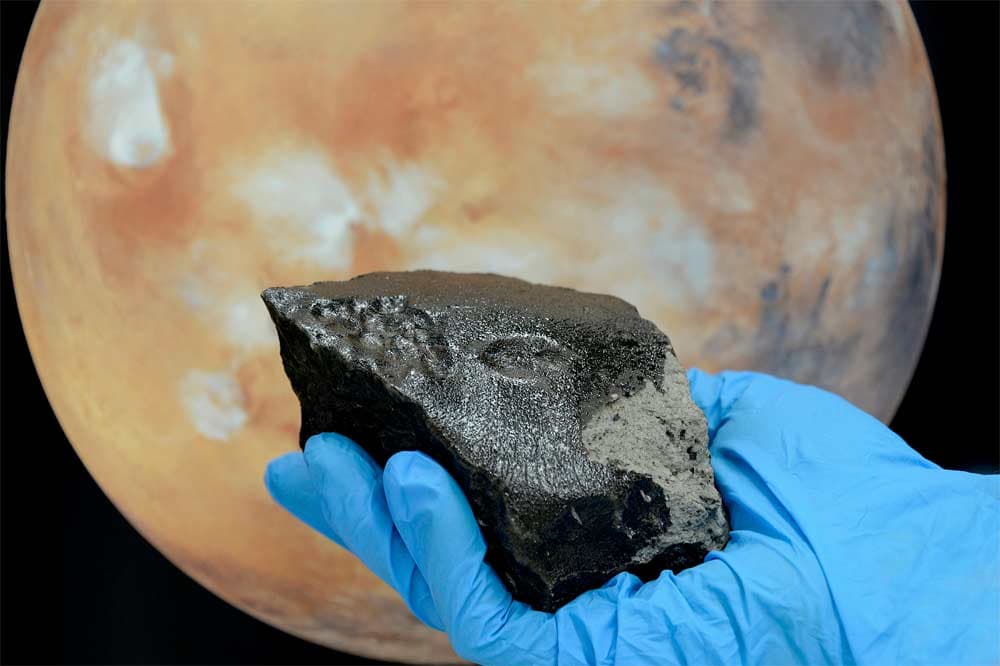 NWA 7034, a meteorite found a few years ago in the Moroccan desert, is like no other rock ever found on Earth. It’s been shown to be a 4.4 billion-year-old chunk of the Martian crust, and according to a new analysis, rocks just like it may cover vast swaths of Mars.

In a new paper, scientists report that spectroscopic measurements of the meteorite are a spot-on match with orbital measurements of the Martian dark plains, areas where the planet’s coating of red dust is thin and the rocks beneath are exposed. The findings suggest that the meteorite, nicknamed Black Beauty, is representative of the “bulk background” of rocks on the Martian surface, says Kevin Cannon, a Brown University graduate student and lead author of the new paper.

The research, co-authored by Jack Mustard from Brown and Carl Agee from the University of New Mexico, is in press in the journal 'Icarus.'

When scientists started analyzing Black Beauty in 2011, they knew they had something special. Its chemical makeup confirmed that it was a castaway from Mars, but it was unlike any Martian meteorite ever found. Before Black Beauty, all the Martian rocks found on Earth were classified as SNC meteorites (shergottites, nakhlites, or chassignites). They’re mainly igneous rocks made of cooled volcanic material.

But Black Beauty is a breccia, a mashup of different rock types welded together in a basaltic matrix. It contains sedimentary components that match the chemical makeup of rocks analyzed by the Mars rovers. Scientists concluded that it is a piece of Martian crust -- the first such sample to make it to Earth.

Cannon and Mustard thought Black Beauty might help to clear up a longstanding enigma: the spectral signal from SNC meteorites never quite match with remotely sensed spectra from the Martian surface. “Most samples from Mars are somewhat similar to spacecraft measurements,” Mustard said, “but annoyingly different.”

So after acquiring a chip of Black Beauty from Agee, Cannon and Mustard used a variety of spectroscopic techniques to analyze it. The work included use of a hyperspectral imaging system developed by Headwall photonics, a Massachusetts-based company. The device enabled detailed spectral imaging of the entire sample.

“Other techniques give us measurements of a dime-sized spot,” Cannon said. “What we wanted to do was get an average for the entire sample. That overall measurement was what ended up matching the orbital data.”

The researchers say the spectral match helps put a face on the dark plains, suggesting that the regions are dominated by brecciated rocks similar to Black Beauty. Because the dark plains are dust-poor regions, they’re thought to be representative of what hides beneath the red dust on much of the rest of the planet.

“This is showing that if you went to Mars and picked up a chunk of crust, you'd expect it to be heavily beat up, battered, broken apart and put back together,” Cannon said.

That the surface of Mars would be rich in Black Beauty-like breccias makes a lot of sense, given what we know about Mars, the researchers say.

“Mars is punctured by over 400,000 impact craters greater than 1 km in diameter,” they write. “Because brecciation is a natural consequence of impacts, it is expected that material similar to NWA 7034 has accumulated on Mars over time.”

In other words, Mustard says, the bulk of rocks on the surface of Mars probably look a lot like Black Beauty: “dark, messy and beautiful.”