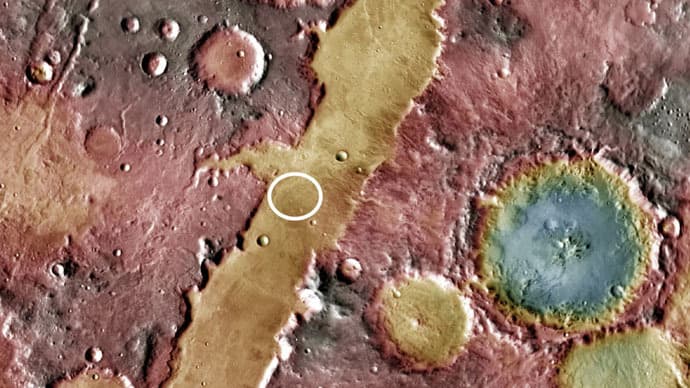 Life, as we all know, is rather versatile. We find it in the darkest depths of the ocean. We find it in highly acidic mud-pools. We even find it in space...okay, so we had to carry life into space on things like the SpaceX Dragon Capsule, but all the same, some lifeforms can survive in the vacuum of space for extended periods, which is still amazingly impressive.

And since life is so terribly resilient, it makes sense to look for it (or look for evidence that life previously existed) in even the most unlikely places.

That's partially why there are currently a few small, metal rovers roaming about on the surface of Mars. It's also why there is a (slightly larger) metal spacecraft zooming about over the Red Planet. And last month, these little crafts made a rather notable discovery. Researchers announced that they have detected deposits of impact glass in craters on the surface of Mars. This "impact glass" is created by the extreme temperatures that we find when a meteor smashes into a planet (or similar body in our solar system). And ultimately, this glass may contain evidence of past life.

The find was made by NASA's Mars Reconnaissance Orbiter (MRO), and it is so noteworthy because previous research has shown that evidence of past life has been preserved in impact glass here on Earth. This means that the Mars glass could also hold important clues about what conditions were like on the Red Planet during previous ages, and whether or not any life existed during these times.

Most recently, a 2014 study, which was led by scientist Peter Schultz of Brown University, found organic molecules and plant matter that was preserved in glass that was formed by an impact that occurred millions of years ago in Argentina. This process, of life being preserved in impact glass, was initially demonstrated by  scientists from the University of Tasmania, who found remnants of an 800,000-year-old swamp in fragments of the material.

Ultimately, this impact process is such an effective preservation tool because the temperature increases are instantaneous. Instead of a slow process involving vast amounts of pressure and a gentle increase in heat, that may result in burning, the material is quickly encased. Schultz asserted that similar processes could preserve signs of life on Mars.

In relation to the recent Mars discovery, scientists were able to make this find by analyzing the light that is reflected off Mars' surface. Rocks and other materials reflect and absorb different wavelengths of light (this is known as the emission spectrum), and by looking at this pattern, we can tell what an object is.

Jack Mustard, co-author of the paper, which was published in the journal Geology, explains: “Glasses tend to be spectrally bland or weakly expressive, so signatures from the glass tend to be overwhelmed by the chunks of rock mixed in with it, but Kevin [lead author] found a way to tease that signal out.”

"The work done by Pete and others showed us that glasses are potentially important for preserving biosignatures," Kevin Cannon said. "Knowing that, we wanted to go look for them on Mars and that's what we did here. Before this paper, no one had been able to definitively detect them on the surface."

The researchers now hope that, in order to determine what secrets can be uncovered about Mars' past, samples of the glass can be collected and returned to Earth for analysis.  This, of course, will take a lot of time, as there is currently no mission meant to visit and return from the Red Planet. Unless, of course, you count Mars One.