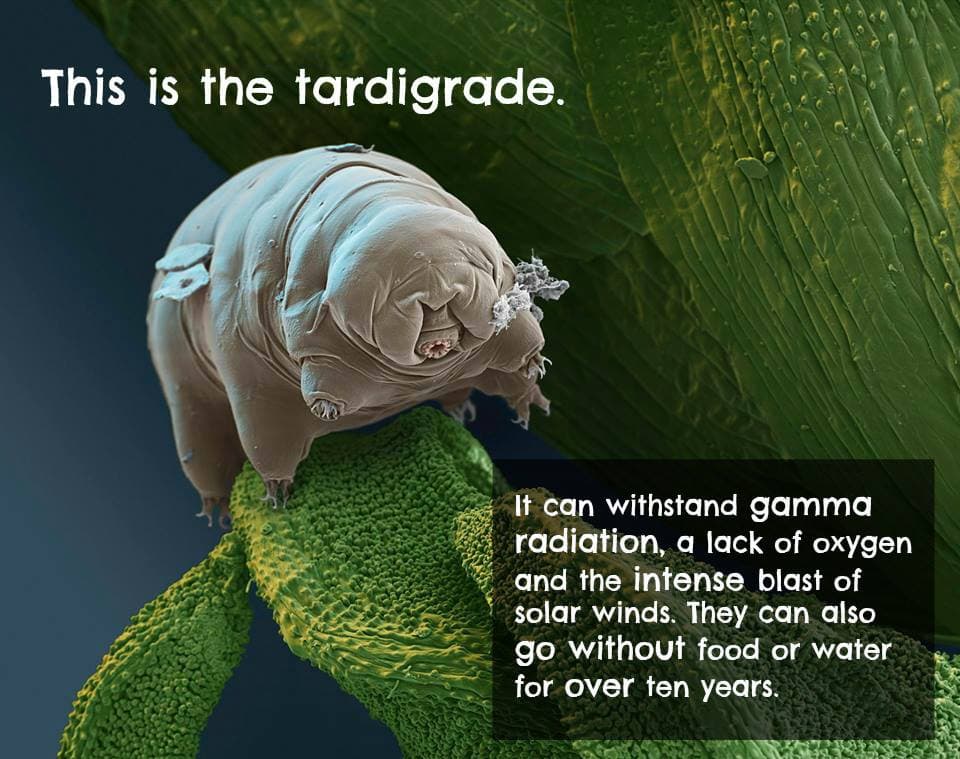 Because of their stumpy appearance, tardigrades are frequently referred to as “water bears.” Under a microscope, they resemble a plump, squishy bear that waddles around on tiny little legs, each of which has a number of claw-like appendages. Generally, tardigrades only reach 1mm in length. But size isn’t everything—these tiny creatures are much tougher than your average bear.

Tardigrades have been frozen and defrosted, roasted and boiled, zapped with X-Rays, placed in a vacuum, exposed to pressures far exceeding those found in the deepest ocean trenches—and lived to tell the tale. They can withstand gamma radiation, oxygen deprivation, and the intense blast of solar wind. They can go without food or water for over ten years, and live quite comfortably in temperatures far exceeding the boiling point of water or plunging to a sub-zero chill. Even when temperatures are hovering just above absolute zero (−458ºF or −272ºC), tardigrades can survive for quite some time without experiencing adverse effects.

In short, they can withstand environmental conditions that would be instantly lethal to most other living organisms.

How are tardigrades able to survive such extreme environments?

Simple. By dying (or coming rather close to it). When faced with extreme conditions, tardigrades can enter a kind of hibernation known as “cryptobiosis,” a death-like state during which the tardigrade undergoes an almost complete loss of body water (they lose over 99% of their water when in this state). Amazingly, tardigrades are able to survive in this suspended animation for a number of years. Then, when reintroduced to a more temperate environment, they recover in a matter of hours.

Even more amazing, when tardigrades are in a state of cryptobiosis, they are almost completely impervious to environmental hazards.

And there’s some hope in that. The fact that tardigrades are able to survive in such inhospitable places is, quite frankly, rather inspiring. As it turns out, many alien worlds have conditions that are inhospitable to earthlings (read: ridiculously lethal). However, the tardigrade ultimately allows us to assert that these worlds are lethal to most earthlings…but not all. If such a resilient creature developed on our own pale blue dot, who knows what wonders may live on other worlds.