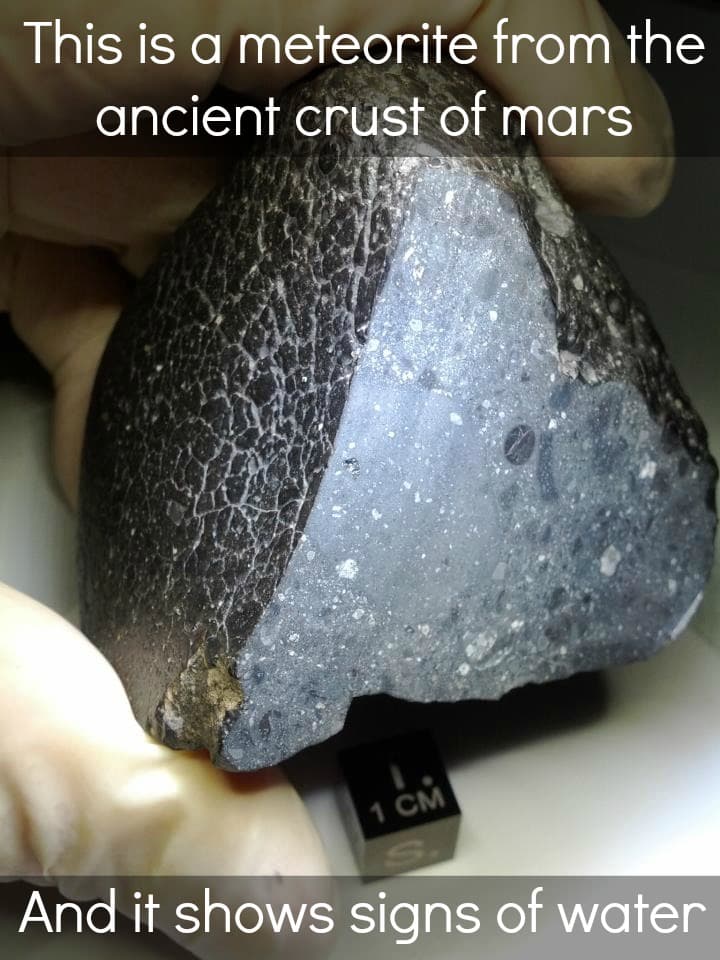 Are you ready for some exciting Mars news? No, this news doesn’t come from Curiosity, but rather the Sahara Desert (yes, the one on Earth).

In 2011, a never-before-seen meteorite was discovered in the Sahara. The strange rock is a new class of meteorite and was designated NWA 7034 (which stands for “Northwest Africa” – so there is a method to the acronym madness); the rock is also known as “Black Beauty” for its appearance.

Of course, if you give a scientist a rock, what will he do? Study it. After a year of testing, analyzing, and more testing, the 320-gram rock was determined to have come from Mars. Planets exchange material all of the time, so in itself, this isn’t terribly exciting (we have about 110 Martian meteorites). However, this particular chunk of the Red Planet comes from the crust and is about 2.1 billion years old. This makes the meteorite unique and extremely interesting since it is the only bit of Martian crust we’ve been able to study as well as being (by far) the oldest Martian rock ever discovered. This rock likely formed at the beginning of the Amazonian geologic period – the most recent in Mars’ history.

Mitch Schulte sums of the importance of this sample by saying, “The age of NWA 7034 is important because it is significantly older than most other Martian meteorites. We now have insight into a piece of Mars’ history at a critical time in its evolution.”

Another thrilling attribute of this geological treasure is its water content; in fact, it contains about ten times the amount of water than is seen in other, more recent, Martian meteorites. This naturally leads to the theory that the water makes an appearance from interactions between the crust and water present in the crust. In addition, there is a different mixture of oxygen isotopes found in this meteorite than is found in other Martian samples, this is probably due to interactions between the Martian geologic process and the Martian atmosphere as it was 2.1 billion years ago.

As scientists continue to study this gem (figuratively speaking), we’ll be able to more accurately piece together what the history of our red friend was, and it will help us to understand whether or not conditions on the planet were suitable for life. It could also help us to understand the dramatic turn of events that turned Mars from a hypothetically Earthlike world into the desert it is now.