Tianzi Mountains: Amazing Images of the Mountains That Looks Like Skyscrapers 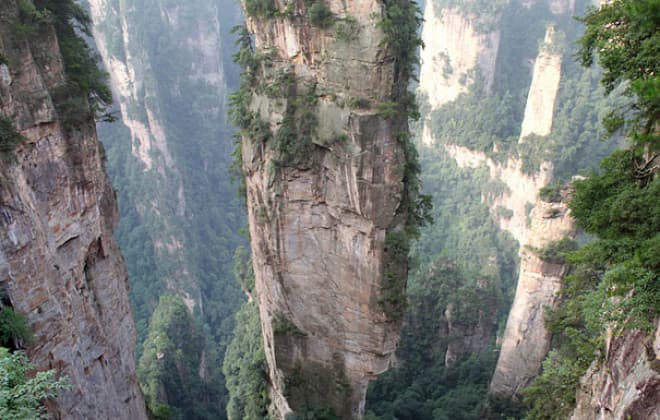 The Tianzi Mountains are probably one of the most spectacular places on Earth. They are located in the Hunan Province of China, and they look like enormous, natural skyscrapers towering over the forests. The highest peak is 1,262 meters (about 4,140 feet) above the sea level. For comparison, the Empire State Building in New York City is a tiny 443 meters (1,454 feet) next to the highest peak.

The structures you see here are actually made from dead mountains. But how can a mountain die? Well, as the images reveal, the elements can slowly eat away at these monoliths as the years pass, leaving small stalks where huge mountains once stood.

These peaks are made from old, weathered sandstone (which are the remnants of mountain peak).  A few of the younger mountains are less weathered, so they still have their sharp peaks). And these staggering towers aren't the only thing that you will find here. The base of these structures has a bit of limestone bedrock, and where you have limestone and water, you have caves—a massive maze of caves.

Aaeons of water erosion, water which came from underground streams, has produced karst caves. As the University of Texas notes, "Karst is a landscape formed from the dissolution of soluble rocks including limestone, dolomite and gypsum. It is characterized by sinkholes, caves, and underground drainage systems." Limestone is easily dissolved in the carbonic-acid-rich water that is common to such areas. This ultimately creates the extensive cave system, underground lakes and rivers, and gigantic cave ins (known as sinkholes).

TravelChina offers some more insight into how these structures are created:

Because the sandstone bedrock that makes up most of the nature reserve was created by a long process of stratification, it appears in distinct layers, each layer slightly different in coloration than the contiguous layers, and because of this layering, the bedrock is subject to erosion that constantly whittles away at the outer edges of exposed rock, leaving an uneven vertical surface that is generally marked by small ledges that alternately jut out/ are recessed. The ledges provide ideal conditions for the accumulation of soil, which in turn can nurture flowers, grasses, shrubs and even trees. Thus the second distinguishing feature of all of the sandstone mountain-peak remnants of Wulingyuan Scenic Area, including those of Tianzi Mountain Nature Reserve, is that these old geomorphological rocks are home to many shrubs and trees which in turn attract birds. Indeed, Tianzi Mountain Nature Reserve is also home to very dense forests with a plethora of wildlife.

If you ever get a chance to go, do send us your pictures.