This Plan For a Martian City Under a Dome is Breathtaking

They want to build a test version here on Earth. 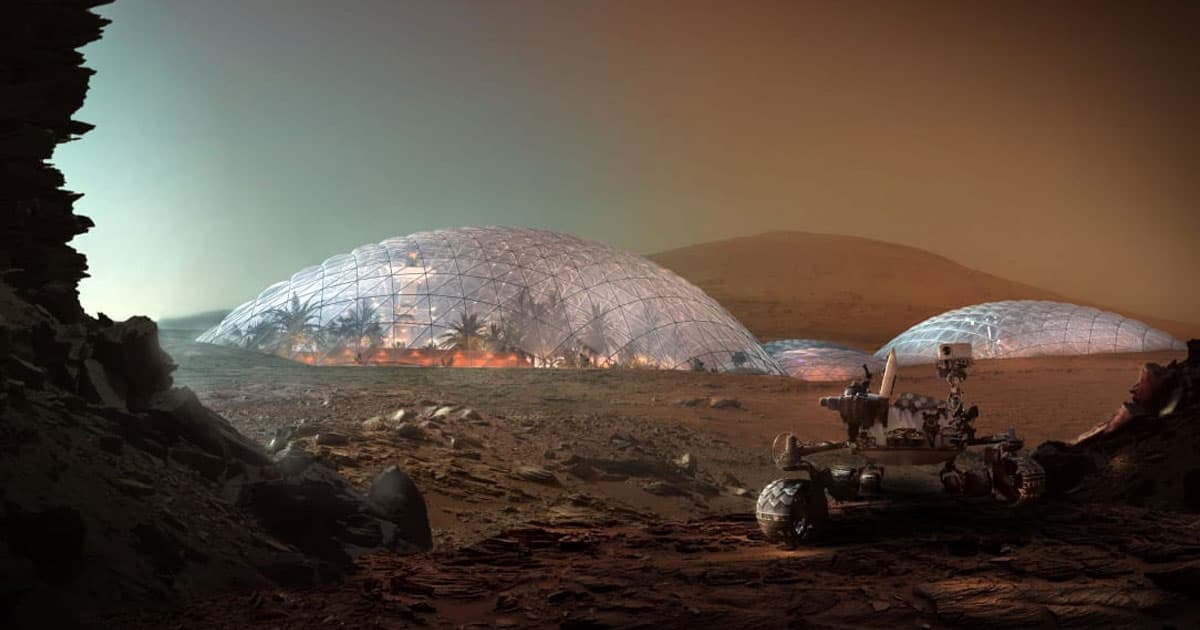 Back in 2017, architecture firm Bjarke Ingels Group were asked to design a prototype of a Martian city by the Dubai government. What they came up with is a stunning vision of what life on the Red Planet could one day be like, CNN reports.

So far, the city is not much more than a concept — but that doesn't make the vision itself any less beautiful.

The architects imagine a future Martian city as being composed of several pressurized biodomes, filled with oxygen mined from underground ice.

"Since there is very little atmosphere on Mars, the heat transfer will be very low, meaning that the air inside the domes will not cool down as fast as it would on Earth," Bjarke Ingels Group architect Jakob Lange told CNN.

To get away from harmful radiation on the surface, rooms would be buried about 20 feet underground.

"In the future on Mars, you would have skylights in your underground cave that would be like aquariums, with fish swimming around," Lange said.

What makes matters even more interesting is the fact that gravity is only a third that on Earth.

"It creates almost like a completely new rule set that you have to follow when designing architecture in space."

The final city —  a conceptual design intended for Dubai on Earth, not Mars — will include a research lab, educational facility, museum, amphiteather and co-working office space.

READ MORE: Architects have designed a Martian city for the desert outside Dubai [CNN]

More on Martian habitats: IKEA Designed the Interior of a Mars Habitat - Futurism

Read This Next
Martian Duds
On Tomorrow's Launch, NASA Is Sending Spacesuit Chunks to Mars
Coarse and Rough
Astronomers Say "Megaripples" Are Moving Across the Surface of Mars
Venus Flyby
Scientists: Flying By Venus to Get to Mars Would Be Cheaper, Faster
Coliving Spaces
These Researchers Want You to Live In a Fungus Megastructure
Brands We Love
Terraforming Mars Is an Addictive Board Game That Lets You Transform the Red Planet
More on Sci-Fi Visions
Human v. Giraffe
Tuesday on the byte
Chaotic Italian Fashion Line Baffles Facial Recognition Software
Step One
Tuesday on the byte
World’s Third Richest Person Says He’s Developed "Addiction" to ChatGPT
FROM THE DEPT. OF...
Tuesday on futurism
The Best Places to Buy A Laptop in 2023
READ MORE STORIES ABOUT / Sci-Fi Visions
Keep up.
Subscribe to our daily newsletter to keep in touch with the subjects shaping our future.
+Social+Newsletter
TopicsAbout UsContact Us
Copyright ©, Camden Media Inc All Rights Reserved. See our User Agreement, Privacy Policy and Data Use Policy. The material on this site may not be reproduced, distributed, transmitted, cached or otherwise used, except with prior written permission of Futurism. Articles may contain affiliate links which enable us to share in the revenue of any purchases made.
Fonts by Typekit and Monotype.