These Researchers Want You to Live In a Fungus Megastructure 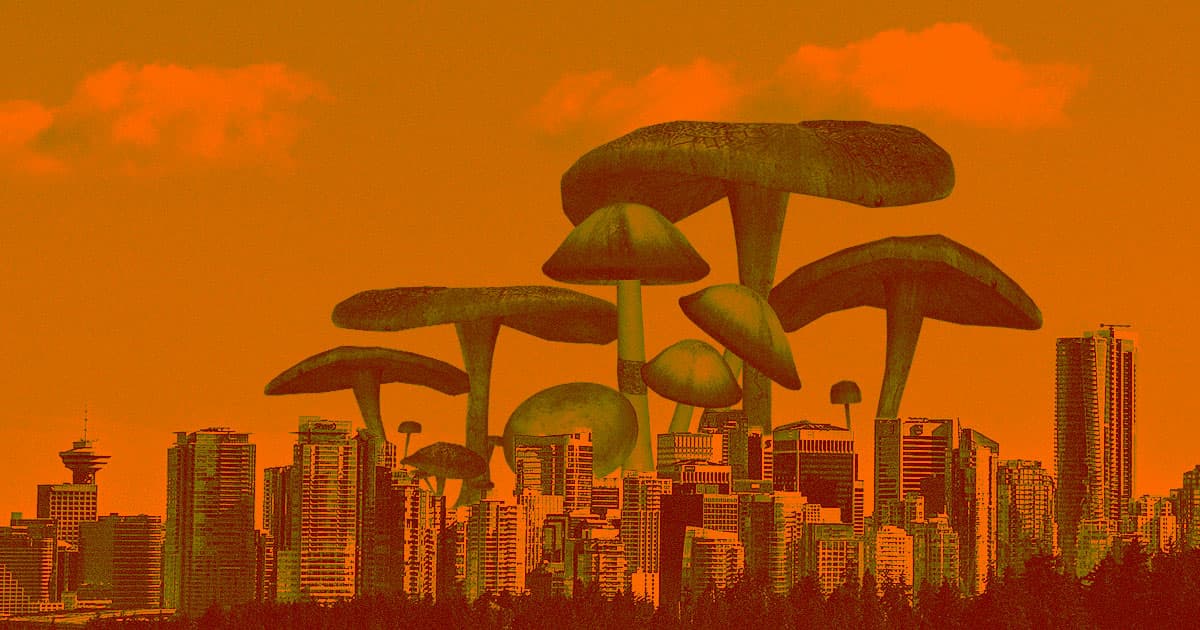 Imagine that you roll out of bed onto a living fungus floor. The walls and ceiling — heck, the whole apartment building, down to the plumbing and electrical systems — are made of fungus too. Wood and concrete are remnants of the distant past; this entire city, from the schools to the stores to the hospitals, is made of living fungus — constantly growing, dying off and regenerating itself.

That's the vision laid out in a provocative new paper, which a team of European academics say is the first-ever exploration of living fungus' potential as a raw material for futuristic, eco-friendly "monolithic structures" that would, in their telling, revolutionize the entire built environment and economy.

"We propose to develop a structural substrate by using live fungal mycelium," reads the paper. "Fungal buildings will self-grow, build, and repair themselves."

The idea is a response to the prospect of catastrophic climate change. Growing our building materials from biological materials, the theory goes, would make construction less dependent on fossil fuels and environmentally-destructive mining operations.

"Fungal materials can have a wide variety of mechanical properties ranging from foam-like to wood-like to polymer-like to elastomer-like," Han Wösten, a microbiologist at The Netherlands' Utrecht University who co-authored the not-yet-peer-reviewed paper, told Futurism. "The fact that we can make wood-like materials implies that we can use it for the building industry."

Along with other forms of living materials, fungal architecture is not a new idea — other research groups have explored the idea of growing building materials out of mycelium. NASA, for instance, is currently testing whether fungus could grow in Martian soil, potentially giving the space agency a low-cost way to grow space habitats onsite.

But those projects all involve killing the fungus after it grows, a process that makes it sturdier as a building material that the team says has already been used for load-bearing structures or boundary walls.

So far, they say, no one else has explored the possibility of building monolithic structures out of living fungus.

"The selling point of our materials is that it is biodegradable, thereby helping to create a circular economy," Wösten said. "At the same time, it should not degrade when actually used as a building material. We can work around this apparent paradox by coating the material. In fact, we also coat wood with paint of oils to protect it against degradation."

"It may be that we will find a fungus that creates wood-like materials without the need of pressing," he said.

Even with a coating, Wösten went on to explain, the goal is to keep the fungal architecture alive — so that an architect could rejuvenate it with water and trigger further growth if repairs or alternations were necessary. Those same coatings, the team says, could be used to capitalize on the fungus' internal structure of networks to replace things like a building's plumbing, electrical wiring, or other logistical needs.

Important to note: those ideas, like much of the team's research, remain fairly speculative.

Andrew Adamatzky, a computer scientist at the University of the West of England who also co-authored the paper, told Futurism that the team is working to build fungal versions of neuromorphic circuits and other electronics. He conceded that conventional wires are cheaper and easier to work with, but added that "the living circuits will be self-growing, self-assembling and self-repairing, which no traditional circuitry can do."

"This is really challenging, but a real opportunity to explore how buildings could grow, self-repair, adapt and disrupt conventional ways of building production by working with highly local resources and growing in-situ to minimize logistics and energy use in material production," said Phil Ayres, a co-author of the paper from the Royal Danish Academy of Fine Arts, "aiming towards a circular economy for construction."

More on living materials: Scientists Create "Living Concrete" That Can Heal Itself

Read This Next
From the Dept. of Things to Buy
Review: The "Out of This World Cook Book" Chronicles the Early Meals of the Space Age
FROM THE DEPT. OF THINGS TO BUY
5 Nintendo Space Games That Are Out of This World
Space Sick
Space Is Wreaking Havoc on Astronauts' Blood
From Our Partners
Get Cleaner Laundry With The Eco-Friendly Ecoegg During This Pre-Black Friday Sale
Water Elemental
NASA Astronaut Says He Almost Drowned During Spacewalk
More on Sci-Fi Visions
What is Happening
Feb 1 on the byte
Elon Musk Sets His Twitter Account to Private
From the Dept. of...
Jan 30 on futurism
The Best Humidifiers of 2023
Human v. Giraffe
Jan 24 on the byte
Chaotic Italian Fashion Line Baffles Facial Recognition Software
READ MORE STORIES ABOUT / Sci-Fi Visions
Keep up.
Subscribe to our daily newsletter to keep in touch with the subjects shaping our future.
+Social+Newsletter
TopicsAbout UsContact Us
Copyright ©, Camden Media Inc All Rights Reserved. See our User Agreement, Privacy Policy and Data Use Policy. The material on this site may not be reproduced, distributed, transmitted, cached or otherwise used, except with prior written permission of Futurism. Articles may contain affiliate links which enable us to share in the revenue of any purchases made.
Fonts by Typekit and Monotype.