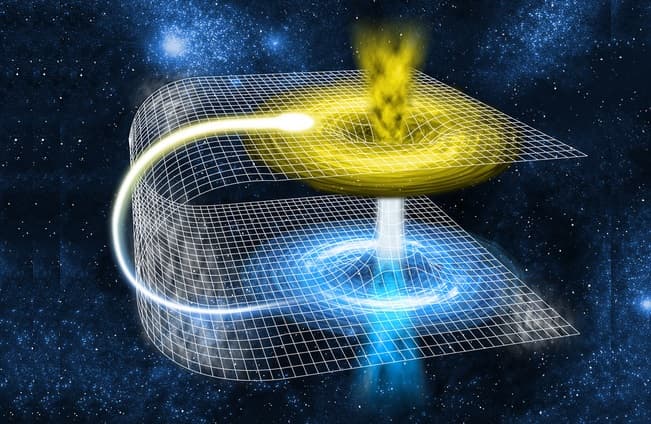 Wormholes are cosmic tunnels that can connect two distant regions of the universe, and have been popularised by the dissemination of theoretical physics and by works of science fiction like Stargate, Star Trek or, more recently, Interstellar. Using present-day technology it would be impossible to create a gravitational wormhole, as the field would have to be manipulated with huge amounts of gravitational energy, which no-one yet knows how to generate.

In electromagnetism, however, advances in metamaterials and invisibility have allowed researchers to put forward several designs to achieve this.

Scientists in the Department of Physics at the Universitat Autònoma de Barcelona have designed and created in the laboratory the first experimental wormhole that can connect two regions of space magnetically. This consists of a tunnel that transfers the magnetic field from one point to the other while keeping it undetectable – invisible – all the way. The research was highlighted in a recent paper in Nature.

The researchers used metamaterials and metasurfaces to build the tunnel experimentally, so that the magnetic field from a source, such as a magnet or a an electromagnet, appears at the other end of the wormhole as an isolated magnetic monopole. This result is strange enough in itself, as magnetic monopoles – magnets with only one pole, whether north or south – do not exist in nature.

The overall effect is that of a magnetic field that appears to travel from one point to another through a dimension that lies outside the conventional three dimensions.

The wormhole in this experiment is a sphere made of different layers: an external layer with a ferromagnetic surface, a second inner layer, made of superconducting material, and a ferromagnetic sheet rolled into a cylinder that crosses the sphere from one end to the other. The sphere is made in such a way as to be magnetically undetectable – invisible, in magnetic field terms – from the exterior.

The magnetic wormhole is an analogy of gravitational ones, as it "changes the topology of space, as if the inner region has been magnetically erased from space", explains Àlvar Sánchez, the lead researcher.

These same researchers had already built a magnetic fibre in 2014: a device capable of transporting the magnetic field from one end to the other. This fibre was, however, detectable magnetically. The wormhole developed now, though, is a completely three-dimensional device that is undetectable by any magnetic field.

This means a step forward towards possible applications in which magnetic fields are used: in medicine for example. This technology could, for example, increase patients' comfort by distancing them from the detectors when having MRI scans in hospital, or allow MRI images of different parts of the body to be obtained simultaneously.