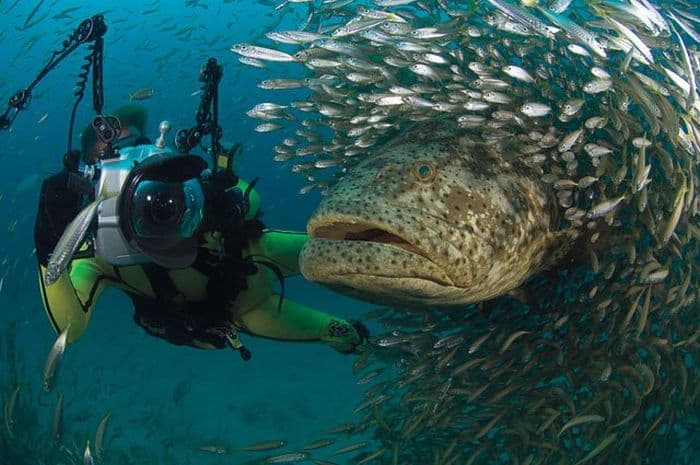 Recently, a couple of fishermen off the shores of Florida's Gulf Coast had the surprise of their lives. They had just caught a shark and were attempting to bring it on board their ship. The shark was far from a little guppy, measuring approximately 5 feet (1.5m) in length. Then suddenly, out of seemingly no where, a Goliath Grouper appeared and swallowed shark, line, and sinker in one enormous bite.

The fishermen described the incident on reddit as follows:

Little backstory: Ran out to the reef at around 8am yesterday and wasn't having much luck. Put out a chum block, set down some blue runners on the reef and waited. Had a 15lb goliath grouper take and brought him up, as I brought him to the boat, the monster goliath shown in the video came and tried to steal him. About 30 minutes later I had about a 5foot nurse shark take and brought him up. As I was dehooking the shark, the goliath came back and inspected but didn't attack him. Finally, about an hour after the nurse shark, I hooked the black tip [shark] behind the boat in the chum slick, and then the hilarity in the video began.

Sharks and generally seen as the ocean's primary predators, so it might be a little surprising (at first) to think of a fish attacking a shark. Of course, it's only shocking until one considers that these fish can grow to lengths of 8.2 feet (2.5 m) and can weigh as much as 800 pounds (363 kg). As another fun fact, according to the Florida Museum of Natural History, they can live for nearly half a century.

The video is a little shaky and hard to see at the start, but the ending is quite impressive.