Man Plays Violin During His Own Brain Surgery 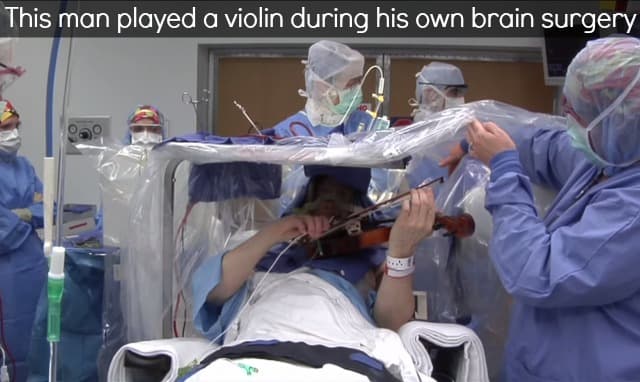 During certain types of brain surgery, it's important for the patient to remain awake (though, I think it would be horribly disconcerting to listen to people drill into my skull). This is normally done so doctors can talk to the patient and ensure all of their mental functions are normal. Doctors will ask the patient simple questions like "what shape is this," "What is 1+1?," and "What is your name?". However, Roger Frisch set a new record, because he played the violin during his brain surgery.

Frisch, who plays for the Minnesota Orchestra, is a world-class violinist. He developed a minor (barely noticeable) tremor in his arm. It's the type of tremor the "average" person wouldn't even notice, but a concert violinist (who needs an incredibly steady arm) notices right away. In the video below, you'll hear a demonstration and, believe me, you'll notice the tremor too.

When somebody develops a tremor, one of the treatment options is to implant electrodes into the brain. Since we are not entirely sure how the electrodes actually help stop tremors from occurring, we can blame magic. With Frisch, the tremor was so slight that doctors wouldn't normally have resorted to electrode therapy since they are still in their earliest stages. However, the tremors were crippling to Frisch, so something had to be done. This opened up a new challenge.

The electrodes need to be implanted with an enormous amount of precision; they also need to be tested to ensure they are on the right frequencies to actually help eliminate the tremor. Since the tremor is only noticeable when Frisch played the violin, the doctors needed a violin that could be played during surgery.

In the end, the operation was a success and Frisch was able to continue his career as a violinist (thanks science!). You can watch the video about this incredible procedure.