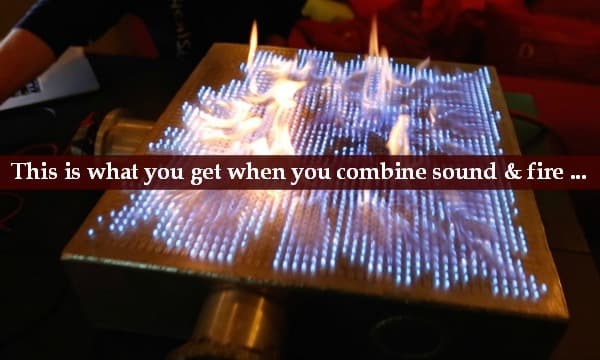 Some of you might be familiar with a Rubens' Tube . In short, it's a tube-like contraption that you poke holes in, insert flammable gas through, and add sound waves to. When you set it on fire, the whole thing is rather memorable.

The device is named after an invention by Heinrich Rubens. And it really is as simple as it sounds: It's a long gas-filled pipe that has holes along the top and is lit on fire i.e., it’s a flaming pipe. But when sound is blasted through, this flaming pipe turns into something amazing—a musical fire.

They may look really cool, yet the physics behind it is truly what makes them so extraordinary, mostly because of its simplicity. But of course, "simple" does not necessarily mean "safe" (so maybe don’t try this at home unless you know what you are doing, or you are being supervised by someone that does).

The Rubens' tube works because, as the soundwaves move through the pipe, the changes in pressure make the the flames spring up or die down as the music plays. Ultimately, the pyro board (like the Rubens' tube) works on the same basic principles: It produces a distinct pattern of flames on top that constantly change based on what’s being played. You see, a Ruben's Tube is essentially a demonstration of standing sound waves. It isn't until the gas is excited that the sound waves start propagating throughout the tube.. allowing us to pinpoint regions of high and low pressures within the sound waves, as the gas starts to slip out of the holes.

Well, the folks from Veritasium went a step further, creating a Rubens' tube that is two dimensional.

Learn how to build your own Rubens' tube at home here.